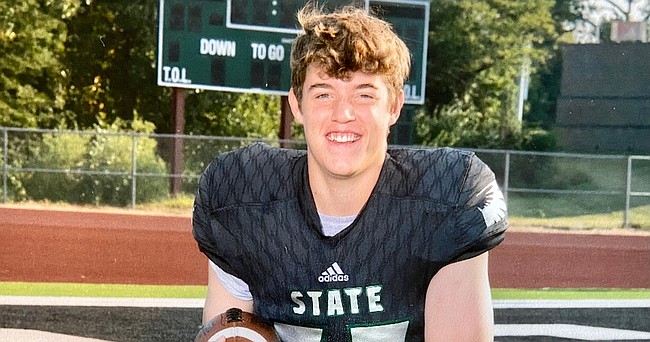 Clements committed Thursday afternoon to Baylor, choosing its scholarship offer over those from Kansas and Kansas State.

A three-star prospect who is considered the No. 8 player in the state by Rivals.com and 247Sports, Clements was named to the Journal-World's All-Area team in December. He also received scholarship offers from Oklahoma State, Iowa State, Minnesota and Nebraska.

"It's definitely a sense of relief," Clements said. "This process has been very good, but it's been very stressful."

Clements narrowed his list of schools to three on Tuesday, and his coach, Kevin Stewart, said he expected Clements to share his decision shortly thereafter.

A 6-foot-7, 275-pound left tackle, Clements took official visits to all three schools. He first visited Kansas on June 10, went to Kansas State on June 17 and then traveled to Baylor on June 24.

"I came off that Kansas official and thought, 'I could be part of this program,' but I also loved Baylor a lot and needed to take my official visit there," Clements said. "I felt like when I was down in Waco, it was a great experience and it was where I needed to be."

Clements spent his first two seasons playing eight-man football at Veritas Christian, then transferred to Free State for his junior year. Kansas offered Clements his first football scholarship in March 2021 — before he had played in a varsity game for the Firebirds.

Baylor offered him a scholarship on Oct. 1, and he visited the school for the first time on Jan. 30.

Although Clements broke his left ankle in the Class 6A sectional-round playoff loss to Derby on Nov. 12, he underwent surgery a week later and was walking by late January. He has been able to join his Free State teammates for summer workouts, which conclude in mid-July.

Stewart said he considers Clements to be the best lineman in the state and that he wants the senior to "understand that this is kind of his team."

"If he can take the team by the reins, so to speak, and be that leader and set the tone, that's what we're looking for from him this year," Stewart said.

One indication of Clements' willingness to be a good teammate, Stewart said, is that he hasn't missed any team activities while making his visits.

"That really shows you how good of a kid he is and a hard worker," he said. "He's going to do these trips on the weekend but he still puts his team first, shows up and works hard in the weight room and goes to football practice. He could be using that excuse to miss (obligations) but he's not. He's making an emphasis to still be a good teammate and work hard. That's been really impressive."

Clements is the fourth offensive lineman to commit to Baylor as part of the class of 2023, which now has 21 players, but the first who doesn't project to play center or guard in college. That could open a path to playing time fairly early, Clements said, which was also part of the appeal.

And although he wasn't particularly sure at first about going to college so far away from home, the official visit last weekend gave he and his parents, Tyler and Lindsay, confidence that it was the right spot for him.

"I really needed to get a good feel for it, and on my official visit, I got a great feel for the family aspect," he said. "What they do down there at Baylor and how genuine it is, I'm comfortable with the distance."

Dammit! But at least he didn't choose K-State.

That's unfortunate. Would love to get all of the great local players.

This is very disappointing because KU recruited Calvin hard.

But, as the John Feinstein book title once said "Next Man Up"!

The KU coaching staff is relentless on the recruiting trail.

It's really sad to see a promising recruit make such a big mistake. Hope it works out ok for him.

How long will Aranda be at Baylor? NFL if Baylor keeps winning. But, the transfer portal could help us with kids like this. If Aranda leaves, and KU has shown improvement, maybe he comes home to finish his career?

Who knows if we will still want him in 2 years. This staff will likely move on. By then if he can't play for Baylor he would likely be a back up for us.

Unfortunate to miss out on someone in our own backyard, but I think that could also hurt KU in these situations. Like a lot of people, I'd imagine that these recruits want the opportunity to leave home and get away from their families to enjoy their college experience, and going to college in the same town means that isn't always possible. Obviously there is plenty to keep you busy on campus while playing a sport and you're not required to spend time at home if you don't want to, but they may not be able to overlook that they're still in the same town they always were.