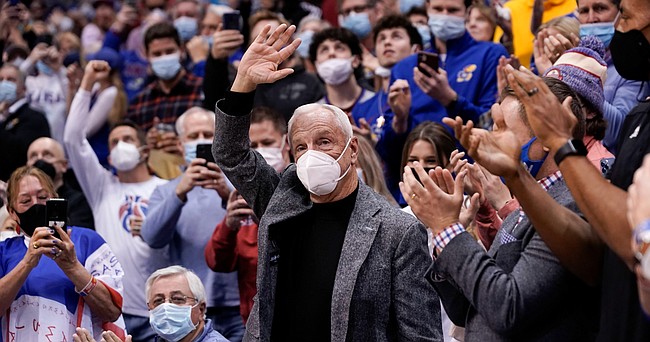 Former Kansas head basketball coach Roy Williams waves to the crowd as he is introduced during a timeout in the first half on Tuesday, Jan. 11, 2022 at Allen Fieldhouse.

Former Kansas coach Roy Williams will be formally inducted into the National Collegiate Basketball Hall of Fame in November as a member of the Class of 2022.

Williams, 71, was part of the 173-member founding class in 2006, but the Hall has honored several of those players, coaches and contributors each year as part of its induction weekend ceremonies.

He'll be the third person with ties to the Jayhawks to be inducted in the Hall, which is near T-Mobile Center in Kansas City, Missouri, but the first former coach. Danny Manning was honored in 2008 and Clyde Lovellette, also a member of the founding class, was recognized in 2012.

Upon his retirement following the 2020-21 season, Williams finished with a 903-264 career record and is the only coach in NCAA history to win at least 400 games at two schools. His 903 wins are the third most by a coach in Division I, trailing only former Duke coach Mike Krzyzewski's 1,202 wins and Syracuse coach Jim Boeheim's 998 wins.

Williams, who was inducted into the Naismith Memorial Basketball Hall of Fame in 2007, will also be part of the Kansas Sports Hall of Fame's Class of 2022. He will be inducted on Oct. 2 at the Kansas Star Casino in Mulvane.

Former Kansas State coach Lon Kruger, another member of the founding class, will also be inducted alongside Williams on Nov. 20. The rest of their classmates are four former players in UConn's Richard Hamilton, North Carolina's Larry Miller, Furman's Frank Selvy and the late Jimmy Walker of Providence, and three coaches in John Beilein, Jerry Krause and Jim Calhoun, who was also a part of the founding class.

Can someone explain what the founding class was/is, if not folks honored by the induction? I guess what they considered the 173 most influential people in the history of the game in 2006? Frankly I'm surprised that Roy wasn't already inducted, I thought he was.

Overdue and well deserved. Who will induct him?