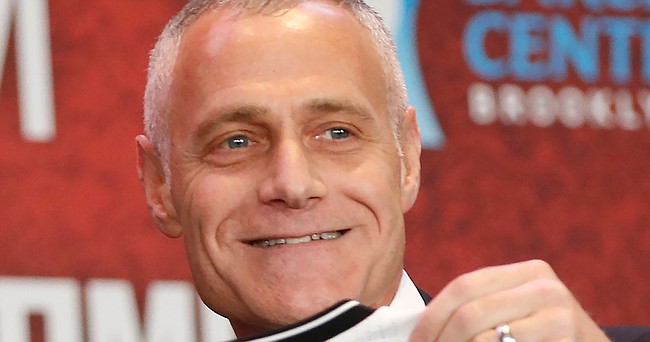 Brett Yormark is shown during a press conference at Barclays Center in the Brooklyn borough of New York on Nov. 16, 2016. Yormark, an executive with Jay-Z's Roc Nation and former CEO of the Brooklyn Nets, was named Big 12 commissioner on June 29, 2022.

DALLAS — Brett Yormark, an executive with Jay-Z's Roc Nation and former CEO of the Brooklyn Nets, was named Big 12 commissioner Wednesday, another unconventional hire by a major conference amid the rapidly changing landscape of college athletics.

Yormark is taking over for Bob Bowlsby, who joined the conference a decade ago after stints as athletic director at Stanford, Iowa and Northern Iowa.

The background for Yormark isn't in college athletics, but could play an interesting role for a conference bracing for challenges in revenue with the impending departures of Oklahoma and Texas while adjusting to athletes cashing in on use of their celebrity.

Yormark, 55, is expected to start Aug. 1, but he will likely make his first public appearance at Big 12 football media days in Arlington, Texas, beginning July 13.

"I'm here to listen, learn, find ways to add value, add resources and try to help shine a light on the importance of college athletics," Yormark said. "I look forward to leveraging my experience and network alongside our presidents, chancellors and athletic directors to shape the future of the Big 12 brand and emphasize our collective strengths."

The hiring of Yormark is similar to the Pac-12′s choice for commissioner last year — former MGM Resorts International executive George Kliavkoff, who also had an extensive background in digital media.

"On behalf of Kansas Athletics, I want to welcome new Big 12 commissioner, Brett Yormark, to our conference," Kansas athletic director Travis Goff said in a statement. "This is a crucial time in college athletics and Brett’s experience and background will make him a premier leader among Power 5 conference commissioners. I look forward to working alongside him and my other peers to continue to position the Big 12 among the nation's leaders year in and year out."

The biggest issue looming for Yormark is a new media rights deal without the powerful brands of the Sooners and Longhorns in the mix. The multibillion-dollar TV deal with ESPN and Fox Sports expires after the 2024-25 academic year, when Oklahoma and Texas will join the SEC — if they haven't already moved before then.

Within weeks of OU and Texas accepting invitations from the SEC, the Big 12 expanded by adding BYU, UCF, Cincinnati and Houston. It could be a 14-team conference for two years if the Sooners and Longhorns don't leave early.

Yormark joined Jay-Z's marketing agency in 2019 as co-CEO of Roc Nation Unified, which handles licensing and branding. He was promoted to the company's chief operating officer in January.

Before Roc Nation, Yormark spent almost 15 years with the Nets, overseeing their move from New Jersey and the construction of the Barclays Center. Yormark left the Nets after Joseph Tsai bought controlling interest in 2019.

Yormark, who graduated from Indiana University in 1988, was with NASCAR before the Nets and oversaw the $750 million agreement with Nextel Communications for naming rights to the circuit's top racing series.

"Brett is one of the most skilled and knowledgeable executives in sports and entertainment," NBA commissioner Adam Silver said. "His decades of operational experience, relentless work ethic and strong industry relationships will be of enormous value to the Big 12, its schools and fans."

Yormark joins the Big 12 in a period of uncertainty, although not one as dire as when Bowlsby took over. The 70-year-old is retiring but planning to transition into an interim role until his contract expires in 2025.

The conference in 2012 was coming off a two-year period when it lost four schools to three other conferences and at times appeared on the brink of collapse. The Big 12 eventually settled as a 10-team conference with the additions of TCU and West Virginia and secured the lucrative media deal not long after hiring Bowlsby.

The Big 12 enjoyed almost a decade of relative stability before the stunner from Oklahoma and Texas last summer. Now the conference has to battle the perception that the loss of the Sooners and Longhorns has dropped it a notch below the other Power Five conferences.

I like the sound of this. He's not a former AD or a university president. He's a businessman and a marketer, which is exactly what the Big 12 needs right now with OU and UT on the way out.

On Yormark, Get Set, Go!

This is going to blow up in our face and it will be spectacular. Get your popcorn ready.

A huge mistake on so many levels. He has 4 years to reset the conference. I give him 3 before he quits.

He is used to dealing with professional players, musicians and organizations. Herding B12 chancellors is a lot different. Add in the NCAA if it still exists, and the issues with a new media contract for 12 schools. Look out.

This is a reach, a unicron hire.

Len you should be careful mocking Omicron. If the intial indications are true, we are due for another Covid round that looks rougher than anything we have been through. No Hype here, just don't throw away yours masks yet.

I assume that the TV deal in particular is probably the main reason why they would hire a commissioner with a background in professional sports and entertainment.

I don't know Rodney - I really like the hire and I'm very willing to give him a chance.

D1 college sports as we know it comes down to what the B1G and the SEC want to do, despite how I loathe even typing that. It's not like the Big 12 Commissioner needs to steer it all.

His #1 objective in the near and 3-5 year term is to make the conference viable. It'll survive, but will it be PAC-12 money or somewhere within reason? If we don't have the cash, then over time we're a Triple-A breeding ground for coaches to shine and get paid in the B1G/SEC. Need the money to keep the coaches and help the school shine. I think Yormark sounds more "with the times", unconventional hire, and perhaps can be more forward-thinking than what the Big 12 has ever had.

Going to be a fun conference, and hopefully a viable one. I'm excited.

Pac 12 just took a huge hit with UCLA and USC leaving for the B10.

It is a weak hire. He will need a lot of help and it will waste time we do not have.

Isn’t the commissioner for the Big10 also fairly new with an unconventional background? Or is it the ACC? I seem to recall reading an article when this search began that talked about this very type of hire. Was it Matt?

Not exactly an innovative hire but sure seems better than the status quo.

Kevin Warren is bringing USC and UCLA to the Big 10. Warren has a background of actually working with and developing college players via the NFL. He understands what it takes, is a diverse hire, and in less than a few months has brought in 2 high profile programs in and added one of the largest media markets in the country. Clearly an interesting hire who hits a Grand Slam for the B10.

Marky Mark is a reach beyond reach for this job.

Some of those planes flying over our heads are full of cash and the top teams that are in great conferences. Marky Mark will need help, will need to learn alot on the job and it will take precious time we do not have.

Just an idea Marky Mark - Get out the rolladex and give George Kliavkoff, the Pac 12 Commissioner a call and see if he is open to merging our two conferences. We could call it the Big-Pac 22 conference. Or 22 Leftovers, or Pac-Big+ 22, or the 22 nonSEC/B10 conference.

No matter what if you can pull this off you can silence the naysaysers once and for all. You know like me!

We will need some planes though. Electric ones the way its going.

Sir Reality’s on a roll.

Interesting hire....I am sure the suits know what they are doing here...so...with that said...WELCOME TO THE BIG 12 COMMISH!!!! ...Hopefully to will be reaching out to the Arizona schools...Colorado...Oregon...Washington and oh yes...the school to the north...Nebraska...if we can get these schools...we will be relevant!....The Seattle...Phoenix and Denver markets will ready help new TV deals in the future....not to mention all things Nike that would come with Oregon....lots of tentacles there...after that...Stanford would come in...but I think the Big Ten wants them very badly...so not sure if that's possible..