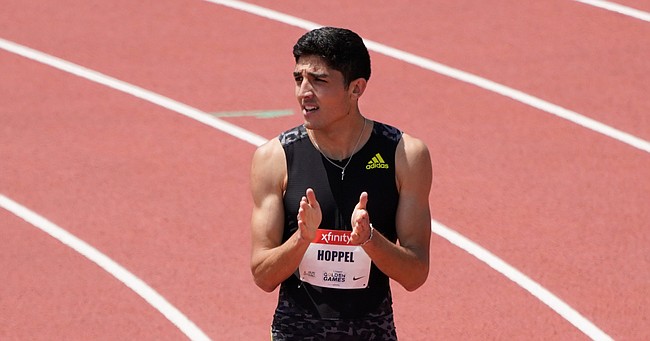 Bryce Hoppel reacts after winning the men's 800 meters during the USATF Golden Games meet at Mount San Antonio College on May 9, 2021, in Walnut, Calif.

Former Kansas standout Bryce Hoppel won the 800 meters at the USA Outdoor Track and Field Championships in Eugene, Oregon, on Sunday to qualify for the World Athletics Championships next month.

Miller held the lead through the first 400 meters, but Hoppel claimed the lead on the backstretch on the last lap and held off Koech around the final turn to win.

A two-time national champion while at Kansas from 2016-19, Hoppel won the 800 meters at the USA Indoor Track and Field Championships in 2020 and did so again in February. He finished third in the event at the World Athletics Indoor Championships in Belgrade, Serbia, in March.

He also completed in the Tokyo Olympics last year and finished fifth in his semifinal heat.

The World Athletics Championships will be held in the United States for the first time as they, too, will take place at Hayward Field in Eugene from July 15-24. Hoppel will be reunited with Kansas coach Stanley Redwine, who is serving in that role with Team USA.