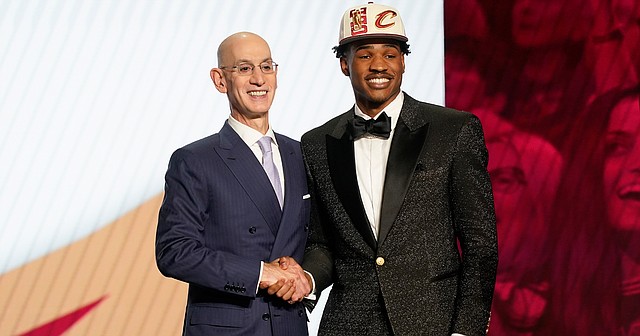 Eight years after the Cleveland Cavaliers made Kansas star Andrew Wiggins the No. 1 pick in the 2014 NBA draft, the Cavs turned to another Jayhawk in the 2022 draft, where they selected Ochai Agbaji with the No. 14 pick on Thursday night.

Agbaji was the last pick of this year’s lottery and he became the highest Jayhawk draftee since Josh Jackson was picked No. 4 overall by Phoenix in 2017.

He also became the 12th lottery pick coached by KU coach Bill Self during his 19 seasons at Kansas. Self was in Brooklyn, New York, with Agbaji and his family, sitting at the Agbaji table in the green room when the pick was made.

Seven picks and about 30 minutes after Agbaji was selected, KU teammate Christian Braun was drafted No. 21 overall by the Denver Nuggets.

“It couldn’t have gone any better than what it did,” Self said of the Jayhawks’ draft night during a Zoom call roughly 30 minutes after Braun was picked. “It just goes to show you, if you’re one of the leading scorers on a team that wins a national championship, you’re going to get drafted. It’s been a pretty good night for anybody that supports Kansas basketball.”

Teammates through it all, from their days with the MOKAN AAU program and for three seasons at Kansas, Agbaji and Braun’s draft night experience was tied together in more ways than just representing the Jayhawks.

The Nuggets’ pick was announced while Agbaji was being interviewed on camera by Jalen Rose, Stephen A. Smith and the rest of the ESPN crew live in Brooklyn, New York.

During the middle of the interview, ESPN's Kevin Nagandhi asked Agbaji to pause and turn to the stage because he thought he might be interested in what happened next. Based on Agbaji's body language, it was evident that he knew what was coming.

Braun then made the walk from the stands down to the stage and sat with Self on the ABC interview couch after meeting NBA Commissioner Adam Silver for a handshake and a Nuggets hat.

Self said he had talked to Denver a lot about Braun and knew the Nuggets liked him. When they made a recent trade for the 30th pick in the first round — to go along with No. 21 — Self said Braun and his agent started to believe the earlier pick was in play.

That’s why Braun was in the stands at Barclays Center, sitting with his family and Self, who made his way up from the floor to be there for Braun’s big moment.

“His agent felt very confident that he needed to be there because he was going that high,” Self said of Braun. “I actually (heard) people (were) calling about him going in the mid-teens and they just couldn’t get it done. We knew all along that Denver really liked him. We just didn’t know if 21 was too high.”

Braun’s moment in the spotlight merely added to what was already a good night for Agbaji and Jayhawks everywhere.

That was evident in the way Agbaji’s smile lit up the room as soon as Silver announced the KU All-American and national champion as Cleveland’s pick. Before the final syllable rang out, Agbaji hopped out of his seat and flashed his signature smile before hugging everyone around him.

Shortly after collecting his Cleveland hat and walking across the stage to shake Silver’s hand, Agbaji was asked about the origins of Thursday’s specific smile during a short interview on ABC.

“Just all the hard work that’s gone in to get to this point,” he said while decked out in a patterned black suit with a black bowtie and the million-dollar smile that made him a fan favorite throughout his four years in Lawrence.

Like Agbaji, Braun’s look was on the more traditional side, as well. He wore a navy suit with a KU blue tie. And a smile that wasn’t quite as big as Agbaji’s but enough to shift Self’s look into that of a proud papa.

“It’s a short roll call to find better people/what you hope your son could grow up to be more so than these two,” Self said. “It’s hard to find. I know they’re both very excited and the families are extremely excited. It’s life-changing. In seconds.”

The unanimous Big 12 player of the year last season and the Most Outstanding Player at the Final Four in New Orleans in April, Agbaji led the conference with 18.8 points per game while averaging 5.1 rebounds and shooting 47.5%, including 40.9% from 3-point range in 35.1 minutes per game.

He finished his Kansas career ranked 15th in school history with 1,652 points, fourth with 250 3-pointers made and ninth with 3,978 minutes played.

At the Final Four, Kansas coach Bill Self said on numerous occasions that Agbaji delivered the best season at Kansas since Danny Manning, who won a national title, was named an All-American and was the No. 1 pick in the 1988 NBA draft.

Thursday marked the first time that Kansas has had two players selected in the same NBA Draft since 2018, when Devonte' Graham and Svi Mykhailiuk were chosen 34th and 47th, respectively.

The last time the Jayhawks had two players chosen in the first round came in 2014, when Wiggins went to the Cavaliers with the No. 1 pick (though was traded to the Timberwolves before his rookie season began) and Joel Embiid was chosen by the Philadelphia 76ers at No. 3.

He became the first Jayhawk drafted by the Nuggets since Denver picked Raef LaFrentz No. 3 overall in 1998.