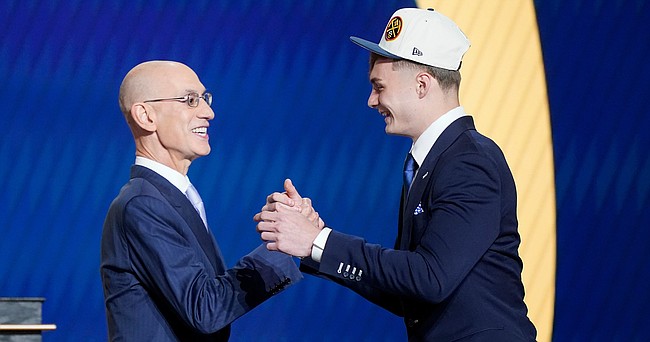 Christian Braun, right, is congratulated by NBA commissioner Adam Silver after being selected 21st by the Denver Nuggets in the NBA Draft on June 23, 2022, in New York.

Former Kansas guard Christian Braun's decision to leave the Jayhawks after his junior season paid off Thursday when he was selected by the Denver Nuggets with the 21st pick in the NBA Draft.

He joins former teammate Ochai Agbaji in beginning a pro career as Agbaji was chosen by the Cleveland Cavaliers with the 14th pick.

It is the first time Kansas has had two players selected in the NBA Draft since 2018, when Devonte' Graham and Svi Mykhailiuk were chosen 34th and 47th, respectively. The last time the Jayhawks had two players chosen in the first round was in 2014, when Andrew Wiggins went to the Cavaliers with the No. 1 pick (though was traded to the Timberwolves before his rookie season began) and Joel Embiid was chosen by the Philadelphia 76ers at No. 3.

Braun's draft range was more uncertain than Agbaji's as analysts projected he would be selected in the late first round or early second round. The Nuggets went 48-34 last season and reached the playoffs.

The Nuggets last drafted a player out of Kansas in 1998, when they selected Raef LaFrentz with the No. 3 pick.

The unanimous Big 12 player of the year last season, Agbaji led the conference with 18.8 points per game while averaging 5.1 rebounds and shooting 47.5%, including 40.9% from 3-point range, in 35.1 minutes per game.

Teammates Remy Martin, David McCormack and Mitch Lightfoot are unlikely to be drafted even though they are eligible.

If he stays there this is a Great spot for CB!

Does anyone else get the feeling CB was told by Memphis to stay in draft, they were going to pick him at #21? Congrats to CB!!! Much love!!!!

They could tell a player if you are still on the board we are going to take you. Nothing is for sure though till you get the phone call saying we are taking you.
Wings who could score and defend was the theme of the draft.

Drafts rarely go as planned. Who knew the Knicks were going to lose their minds, again, and trade away their 2022/23 season for 3 draft picks. Knick season ticket holders have to be thrilled.

CB has a legit chance to play on their second unit next season. He should reach out to D. Graham for his thoughts on how to approach his rookie season, both on and off the court.

OA is in a rough situation. He was a lottery pick and has value due to how the NBA Salary cap works. The Cavs are always a little lost. Their plan is to spend their cap money on mid level players. Cleveland are where things go to die.

Good spot for Ochai, but yes, great for CB. Optimistic for both because they are both such hard workers.

I wonder what's going to happen with D-Mac, Remy, and Mitch. They didn't get drafted, but maybe they could sign on with a team later, or get into the G-League, or play overseas?