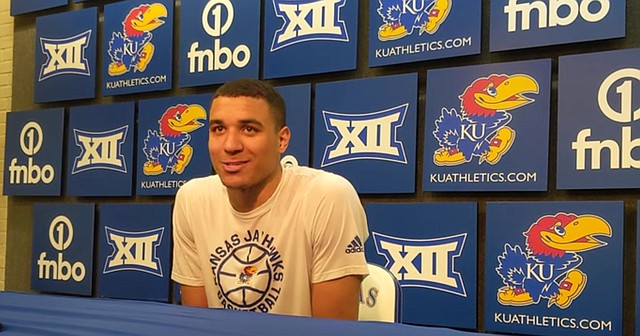 Kansas newcomer Kevin McCullar Jr. meets with the local media for the first time on Tuesday, June 14, 2022 at Allen Fieldhouse.

Kansas newcomer Kevin McCullar Jr. did not have much time to worry about official visits or anything like that when he was choosing between KU and Gonzaga after deciding to leave Texas Tech.

So it was helpful that he already knew a little about Kansas coach Bill Self and the Jayhawks.

It was also helpful that one of his biggest sources of information was an old friend from Texas who he soon will be playing alongside in a KU uniform — Kansas junior Jalen Wilson.

“J-Wil would tell me that on the scouting report (it said) ‘This guy makes them go,’ and that kind of stuff,” McCullar said Tuesday during his first session with the local media. “So that was good to hear. But getting on the phone with (Self) when I did enter the portal and just hearing how excited I was and his enthusiasm was good.

“He has a great plan in place for me and for all of our guys here to win a lot of games, so it’s going to be good.”

In recent years, whenever KU prepared to face McCullar and Texas Tech, Self always spoke highly of the 6-foot-6, 210-pound wing. But on Monday, during a break at his second week of youth camps, Self went one step further with his praise for the KU newcomer.

“To me, he’s the perfect fit if you want to play interchangeable parts on the perimeter,” Self said of adding McCullar to the 2022-23 Kansas roster. “He’s not a point guard, I don’t think. But he can play point guard. If you have some point guard skill and you’re big enough to play the 2, 3, 4 then you may have something special going on. And that’s what we thought all along. We thought he fit us as well as anybody possibly could that was in the portal, from a style standpoint.”

McCullar’s familiarity with some of the players on KU’s roster, as well as Kansas and Allen Fieldhouse in general, figures to help his transition. But Self said he didn’t know how much of an advantage that would be when it came to blending him into the mix on the court.

Self said McCullar’s knowledge of how KU plays and past experience of seeing it firsthand would give him “a little advantage” over someone who came to KU from a different conference. But the Kansas coach who is set to enter his 20th season in charge of the Jayhawks said it was not such a head-start that someone from outside of the Big 12 could not close that gap.

“Just because you played against it doesn't mean you know the inner workings and how you do things and stuff like that,” Self said. “But he's a very, very bright, high-IQ guy. Being here in the summer, from a culture standpoint, he’ll start to feel it a little bit.”

While an ankle injury during the NBA’s G League Elite Camp while going through the draft process helped lead to him pulling his name out of the draft, McCullar said he got plenty of good feedback from NBA executives last month, which included dining and working out with at least four teams — Brooklyn, Phoenix, Utah and the New York Knicks.

McCullar said everyone he talked with told him that he was on the right path and needed to round out his draft stock by getting stronger, enhancing his strengths and staying healthy.

“Staying healthy is the main thing,” McCullar said Tuesday. “And they told me I'll be NBA player for a very long time if I keep playing the way I play.”

He said hearing such positive things about his skills added to his confidence and made him even more excited to build on them at a place like KU.

“It felt good knowing I’m right there, (this close) to my ultimate goal, my dream since I've been a little kid. So (I’m) just knocking on the doorstep, but now I'm here to Kansas and ready to try to run it back.”

McCullar said the ankle injury is no longer an issue and that he has joined his teammates on the practice floor and in the weight room.

"I've already been practicing," he said Tuesday. "We just got done. Got some good work in."