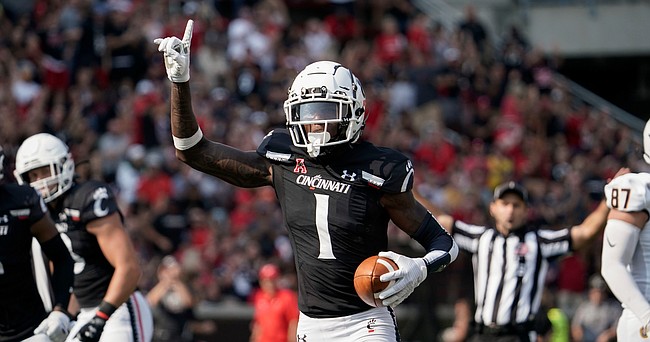 Cincinnati cornerback Ahmad Gardner celebrates an interception during a game against Murray State on Sept. 11, 2021, at Nippert Stadium in Cincinnati.

The American Athletic Conference announced an agreement Friday with Cincinnati, Houston and UCF that paves the way for the schools to join the Big 12 in 2023.

The three schools announced in September they had accepted invitations to join the Big 12, which moved quickly to a rebuild its membership after Texas and Oklahoma announced they planned to join the SEC in 2025.

The American requires its members to give more than two years' notice before they can leave the conference and pay a $10 million exit fee. The AAC said its remaining members agreed to terminate the memberships of Cincinnati, Houston and UCF, effective July 1, 2023.

Each departing school agreed to pay the AAC $18 million, with more than half paid out by 2024 and the rest due over a period of 12 years, two people with knowledge of the deal told The Associated Press. Both spoke on condition of anonymity because neither the conference nor the schools are releasing terms of the agreement.

Commissioner Mike Aresco thanked the leadership of the departing schools for arriving at a "sensible resolution."

All three institutions were successful while members of the AAC and were instrumental in taking the conference "to great heights, both athletically and academically," Aresco said in a statement. "We wish them the best and look forward to having them compete in our conference in 2022-23."

Cincinnati has won the last two AAC football championships and reached the College Football Playoff last season. UCF also won the AAC football title in 2017 and in 2018 and Houston, which lost to Cincinnati in last season's title game, has one conference title.

The new-look AAC is also preparing to have 14 teams in 2023, with six schools from Conference USA having already accepted invitations. Charlotte, Florida Atlantic, North Texas, Rice, UAB and UTSA were all targeting 2023 to make the switch from C-USA to the AAC.

Glad to see this happen. With the incoming schools there seems to be a lot of goodwill between the new schools, their fanbases, and the remaining Big 12 schools. Should be a fun year in both football and basketball in 2023!

More so for Kansas in basketball than in football, I imagine.

David Cobb at CBS Sports thinks the Big 12 will be a 14-team league for only one year and that Joke-lahoma and Tex-ass will leave the conference in 2024 instead of 2025.

I’ve thought all along that ut-ou would find an early exit path in much the same way as those joining the Big12.

Still, it would be fun to humble the horns again.

I'm actually excited for this to happen. New schools, new rivalries. I'm a little concerned for the football program, though. We're not adding rummies. We're still at the bottom of the food chain. Time will tell once they're in our conference for a few years. I still believe in Leipold, but this may set the rebuild back a couple of years.

The football program has been in a perpetual rebuild since Mangino was fired. At this point, what's another setback for that lolcow of a football team?

From an arithmetic standpoint, it will be comforting to have the conference name equal the number of teams.

The KU football program is improving and will be competitive in the "new" Big 12 (just my opinion).