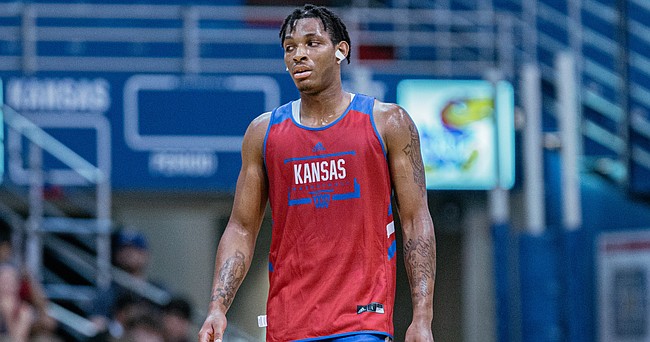 Forward MJ Rice waits for play to resume during the team scrimmage at the annual Bill Self Basketball Camp on Wednesday, June 8, 2022 at Allen Fieldhouse.

For months after he committed to Kansas, many questioned whether five-star prospect MJ Rice would actually wind up wearing a KU uniform or if he’d skip college altogether and jump straight to the pro level.

The answer to that question came emphatically on Wednesday afternoon at Allen Fieldhouse, where Rice competed for the first time as an official member of the 2022-23 Kansas basketball team.

Eleven hours after arriving in Lawrence — at the wee hour of 4 a.m. Wednesday morning — Rice was in a No. 11 Kansas practice uniform scrimmaging in front of hundreds of Bill Self campers and showcasing his all-around game during the annual camp game.

It wasn’t just his 18-point outing that impressed, though. It was more about how he got those 18 points.

“It was cool seeing what he can do,” sophomore forward KJ Adams said. “His jumper’s really smooth. His confidence level is up high and it gives him (a chance) to hit shots like he did today. I think he’s going to be really good.”

Tough drives through contact at players big and small, pull-up jumpers, run-outs in transition and shots from behind the 3-point line all were a part of Rice’s outing on Wednesday. His red team fell in the bragging-rights game, 81-79, to a blue squad that received 30 points from Joe Yesufu and 16 more from Adams, including the game winning dunk with just under four seconds to play.

Adams, who has big expectations for his second season as a Jayhawk, was way more interested in talking about what others did in the scrimmage than his own numbers. That included Rice.

“(He) laced up his sneakers and was hooping really well today,” Adams said of the Henderson, North Carolina freshman. “I’m really expecting big things for him. Especially being a (McDonald’s) All-American. There’s a target on your back, but he’s handled all that really well.”

Nothing about Rice’s game looked difficult on Wednesday. Sure, it was a scrimmage where defense was mostly optional, but the 6-foot-5, 225-pound guard looked both smooth and solid at pretty much every spot on the floor, running with ease and playing above the rim at times, as well.

Two of Rice’s most notable moments in Wednesday’s scrimmage came when he led the pack in transition and elected to drive it down the heart of the lane for an easy two. The first time came against fellow-freshman Gradey Dick, who he shoved out his way en route to the rim. The second time came against super-senior forward Cam Martin, whose 6-9, 230-pound frame was also no issue for Rice.

“He’s a dog,” said KU sophomore Bobby Pettiford, another North Carolina native. “People think it’s just kind of big and strong; I hear that a lot. But he’s been working on his skills. He can shoot the ball, he’s a three-level scorer, he can guard and coach (Bill Self) will make sure he has him playing defense.”

Rice was far from the only player to impress on Wednesday during the 30-minute scrimmage with a running clock.

Yesufu’s 30-point outburst featured six 3-pointers, including makes on his first four attempts from behind the arc, and sophomore Zach Clemence’s 19 points came off of an equal blend of 3-point makes and dunks in the paint.

“Joe’s always in that mood,” Adams said of the second-year guard who transferred to KU from Drake before last season. “We didn’t really see it last year because he didn’t really have the opportunity, but Joe’s a really good player and I really expect big things from him this year.”

Beyond that, Rice’s classmates, freshmen Dick and Ernest Udeh, also both reached double figures in scoring, with Dick scoring 10 points and Udeh using his size and high motor around the rim to score 16.

Freshman Zuby Ejiofor has yet to arrive and Texas Tech transfer Kevin McCullar and sophomore Bobby Pettiford both sat out of Wednesday's scrimmage. KU junior Jalen Wilson, who announced last week that he was returning to Kansas for another season, also has yet to arrive back on campus.

Nobody, from the coaching staff to the players themselves, is going to put much stock in the numbers or efforts put up during a camp scrimmage. But Adams said it has been good for this group to start to learn how to play together, whether in front of 700 campers or in pick-up games in the practice gym.

“It was fun giving the campers a little glimpse of what’s happening right now and it’s pretty fun just kicking it with the guys who just got here,” Adams said. “This year, we’re just trying to ease them in a lot. Last year was kind of go, go, go because we had so many veterans, but this year, since we have so many freshmen, I think we’re kind of lightening the load a little bit.”

KU forward KJ Adams on what stood out during a recent camp scrimmage with a handful of newcomers by KUsports.com

Heard MJ was strong but dang. Lance could use him.

So many options. Good to see Joe light it up.

Matt - Just relistened to what I think was the last KU Sports Hour from 2 months ago. Is there another one coming?

Also, crazy thought during the last KU Sports Hour, does the Full Remy happen if Bobby is healthy vs out for the remainder of the season?

What's the official word on Big Dave. I understand he still has one year of eligibility left? Did he sign with an agent? I might have missed it but I don't recall seeing the latest on the LJW.

Correct. Dave is full-speed-ahead on carving out a pro career and never considered anything else since KU won the title back in April.

Rice already looks the part. If he is as good as he looks, we are in for a treat.

LOVE that we have a couple of top recruits from the state of North Carolina.

David - The interview with Kyle is a fun listen. In it, someone asks if he gives MJ any East coast - west coast smack because he prepped in Napa. Kyle said, nah, he’s from NC. It’s good. 😉