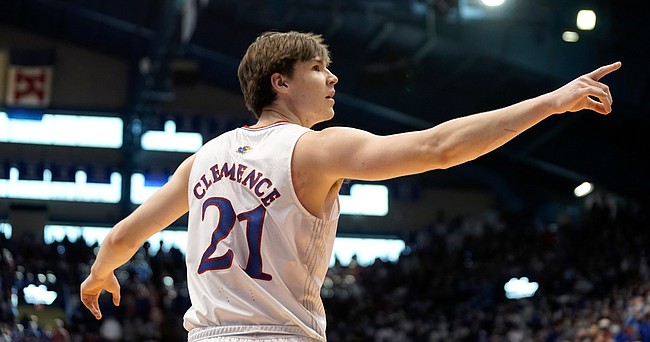 Kansas forward Zach Clemence (21) points to the Kansas students late in the second half on Saturday, Feb. 12, 2022 at Allen Fieldhouse.

Zach Clemence was speaking Tuesday about how he feels responsible for helping the Kansas men's basketball team's younger players adjust to the rigors of the college game when he was confronted with the irony of his words.

Wasn't Clemence, a sophomore-to-be who averaged 4.8 minutes across 24 games last season, still one of those younger players?

"I mean, we did everything you can for college basketball," Clemence said, referring to the Jayhawks' national championship run. "We've seen it all. I mean, we didn't do as much as the other guys, but like, we watched them and we learned (from) them. The young guys didn't get to do that, so we've got to teach them what we've learned."

If Clemence can apply what it is that he learned from the departed David McCormack and Mitch Lightfoot over the past 12 months, the Jayhawks will be much better for it in the fall and beyond.

Among the myriad questions coach Bill Self will need to answer before next season begins is how to replace McCormack and Lightfoot, Kansas' two most recent masters of the middle who have since graduated.

A lanky, 6-foot-10 forward, Clemence isn't the same style of player as his former teammates, but he is the surest thing the Jayhawks have. Cam Martin, a sixth-year senior who redshirted last season after transferring from Missouri Southern, will vie for time in the paint, as will incoming freshmen Ernest Udeh Jr. and Zuby Ejiofor. (KJ Adams, who stepped in when the Jayhawks went small or were in a pinch, should play more naturally farther from the basket.)

And whereas Clemence can provide problems for opponents unaccustomed to defending a player of his size so far from the basket — his shooting range extends to the perimeter, as he was willing to show last season — how he'll handle the physicality of the low post is uncertain.

In anticipation, his goal is to increase his weight from 218 pounds to 235 before the season starts. As of Tuesday, he was at 225.

"Just eat everything and lift," Clemence said, referring to his plan for packing on the pounds. "It's tough, but that's just how it goes."

Clemence, who appeared much more confident and relaxed than he did at any point during his freshman season, stopped himself Tuesday after he referred to that first year as "hard" and settled on "up and down."

He missed nine games with a broken toe, then returned from the toe injury by playing stout defense across nine second-half minutes in a 71-69 home win over Oklahoma on Feb. 12 — a game he punctuated with an eye-opening 3-pointer. He was lauded by Self for a rebound being "the most competitive play ... that anybody even attempted to make" following a 74-64 loss at TCU on March 1 but played only 26 seconds in that game as he was evaluated for a concussion.

All told, Clemence made 15 of 40 shots, including 6 of 22 from 3-point range, and averaged 2.1 points and 1.8 rebounds per game. He played 10 minutes in three of the Jayhawks' six NCAA Tournament games, but nine of those were in the opening-round rout of Texas Southern.

His biggest takeaway from his freshman season?

That's why, he said, he's trying to be much more assertive — to make those good days happen. Clemence spent only one week back home once the spring semester ended, preferring instead to remain in Lawrence to work out and train.

What his role will be next season, Clemence said, will depend on "how everyone gets used to each other and how we play together." Regardless, he said, he wants to be able to step into a leadership role and set the tone for his teammates in the absence of Ochai Agbaji, Christian Braun and the others who have left.

Perhaps, then, that does make him more of a veteran.

"I've always been confident in myself," Clemence said. "I mean, why not? Like, why not be your biggest fan? It's just a mindset. I just go back to that. Like, why have a bad mindset when you can have a good one?"

I can see Mr. Zac Clemence making the largest improvement of the 2021-2022 Freshman class. He can be aggressive when battling for a rebound and he might be the best 3-point threat of the returning Jayhawks. On the flip side he will need to continue to improve his team defense and vastly improve his free throw percentage to make the biggest impact. I also believe that his confidence, even though he states, "I've always been confident in myself," will benefit from Christian Braun not returning. CB, who did not lack for confidence, had a way of putting freshman in their place. You could see it during the TV interview after the OU game when 3 players, including Zac and CB, were invited for the postgame interview and Zac talked about his game winning three. You can also refer to the KJ Adams story, recalling the final play of the NCAA championship, “I remember I wanted to guard Caleb and then Christian said, ‘No, I'm not letting this freshman mess this up,’ so he ended up guarding him.” Should be an interesting 2022-2023 season. There again is a lot of talent for Self to mold, just not as much game time experience. Rock Chalk.

I still have to check regularly to see which one has the “h”; Boyer or Clemence. Zach has more letter in his first and last name 😉

Good that Zach is working on getting stronger. It will be key for him defending the 5, though hopefully his shooting form returns as well. Should be an interesting battle with Cam and Udeh.

My understanding is that Zuby is more similar to KJ than a 5. Those 2 might be the future 4’s, and certainly Jalen could slide to the 3, but Zuby and KJ would essentially need to beat out Gradey and MJ for a starting spot.

Only WVU has less returning actual production, but probably still have the most potential.

I don’t see a battle between Cam and Udeh at all. Udeh is a low block scorer and a rim protector. He will play.

IMO, what we have seen in recent years is Coach Self adapting to maximize the roster. With Cam and Zach both being players that should be able to stretch the D, I could see the O transforming to 5 wide with lots of room for dribble drives or even posting our big guards against smaller defenders as matchups allow. One of the three likely starts at the 5, which some might call a battle, though I’ve never actually seen a practice. Heard they’re sometimes more competitive than the games.

If Udeh is as good as he's projected to be, I think he will play a lot. By now, we all know Self loves the high-low with post players and also middle ball screens like they ran to death with Doke. Clemence could easily come in and play at the 4 with Wilson at the 3 and they could go "BIG" while still stretching the perimeter because of clemence's shooting ability. There's a lot of line-up possibilities with more low post depth now. Though in reality, udeh and ejiofor probably won't be ready to Self's liking and they have an "experience" year like clemence just had. Martin feels like he should be garnering playing time given his college experience and that he also sat out and learned.

Having said all that, just too many unknowns still to really pin anything down for the post players.