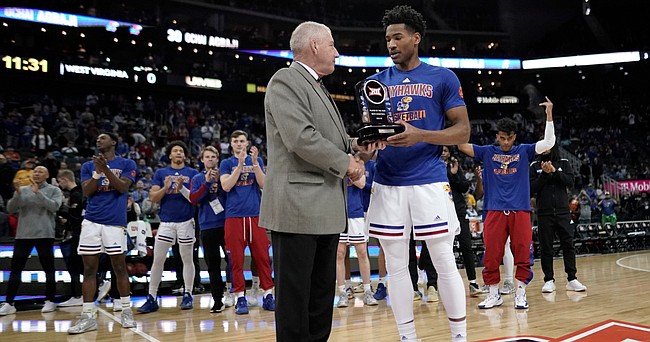 Kansas guard Ochai Agbaji receives the Big 12 Player of the Year trophy from commissioner Bob Bowlsby prior to tipoff against West Virginia on Thursday, March 10, 2022 at T-Mobile Center in Kansas City.

Kansas City, Missouri will remain the home of the men’s and women’s Big 12 basketball tournaments until at least 2027.

The Big 12 Conference voted this week to approve a two-year extension to the multi-year agreement for Kansas City to serve as the host site for the men’s and women’s postseason tournaments. The current contract locked Kansas City in through 2025 and the extension guarantees the city will be the host site in both 2026 and 2027, as well.

“Kansas City’s long affiliation with the Big 12 Conference entered an exciting new chapter in 2020 when we welcomed the women’s tournament back to Kansas City,” said Kathy Nelson, President and CEO of the Kansas City Sports Commission and Visit KC. “Our city’s passion for basketball is on full display during the Big 12 Basketball Championships and we could not be more excited to continue our tradition of excellence when hosting these tournaments.”

This past March, downtown Kansas City was transformed to celebrate the Big 12’s return with commemorative street pole banners and a custom-wrapped streetcar, as well as activations in Barney Allis Plaza and the Power & Light District. Additional programming included the Big 12 Big Q barbecue contest and the Big 12 Run.

“Kansas City has been a valued partner, showcasing a true dedication to making these tournaments the best postseason basketball event in the country,” departing Big 12 Commissioner Bob Bowlsby said in a statement. “As we prepare to welcome four new schools in the coming years, I’m confident Kansas City will continue to deliver a first-class championship experience for our athletes, administrators, fans and partners.”

In other news from the recently wrapped Big 12 spring meetings:

• The conference announced that a record $42.6 million in revenue will be distributed to each of the Big 12’s 10 current institutions. According to The Associated Press, this is an increase of nearly 25% from 2021 and a 10% increase from pre-pandemic levels. Texas Tech president Lawrence Schovanec, chairman of the Big 12 board of directors, told the Associated Press that the league is in a very strong position and that the search for a new conference commissioner is on track to be completed by mid-July.

• It was decided that the annual Big 12 Men’s and Women’s Sportsmanship Awards will be renamed the Bob Bowlsby Awards.

I was thinking that the team in each sport that creates the most turnovers should receive the Bowlsby Award. In honor of of all the member turnover in the conference while Bowlsby has been “in charge”.

You're working way too hard for that one. I'd tell you not to quit your day-job, but I question whether or not you even know what a job is.

I was wondering about the connection between Bob Bowlsby and Sportsmanship. The turnover award is classic. Maybe one of the best ever. {hat tip}

Can the LJWorld tell us what KU and the other Big 12 schools Tier III dollars are?

Will Kansas City continue to host the Big 12 Tournament after KU departs to the B1G?

Maybe come up with a worthy female to name the women’s sportsmanship award after? Geez

How about Andrea Hudy?

The Big 12 Tournament should never leave Kansas City. I'm still pissed that it was transferred to Dallas and Oklahoma City a few times in the 2000s.