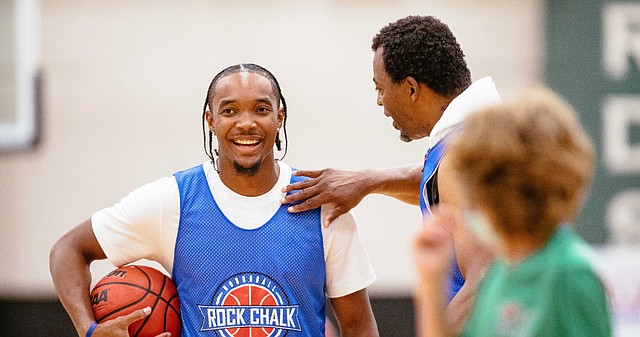 With the 14th annual Rock Chalk Roundball Classic now just one week away, the focus starts to shift to the new names and faces who will be making their debut appearance at the charity basketball event organized by Brian Hanni.

This year, however, you could make a case that everyone there will be new.

That’s because, for the first time in three years, the Classic will be able to feature all of its events at full capacity without limiting or eliminating any of them because of the pandemic.

That includes a basketball game with some of the biggest names in KU history at 7 p.m. Thursday night at Free State High, a VIP dinner on June 10 at Burge Union and the second edition of the Rock Chalk Roundbowl Classic bowling challenge at Royal Crest Lanes at noon on June 11.

“It’s always our aim with the Roundball Classic to raise life-changing dollars for these families battling pediatric cancer,” Hanni told the Journal-World on Thursday afternoon. “And the basketball game and bowling event certainly are helpful in that regard. But our biggest night of fundraising has always been the VIP dinner and we’re thrilled to have that back this year for the first time after two summers off.”

As always, the funds raised at this year’s Roundball weekend will go to five families of children battling cancer. This year’s beneficiaries — known as “the starting five” — are: 2-year-old DK Clark, of Topeka; 13-year-old Jake Jones, of Roeland Park; 10-year-old Fatima Gomez, of Olathe; 1-year-old John Foster, of Edgerton; and 8-year-old George Langston, of Olathe.

In the first 13 years of the event, the Roundball Classic has raised more than $772,000 to help families fighting cancer. More than 100 former KU players have returned in some capacity to participate in the game, and this year’s event will add to that number, with Devon Dotson, Udoka Azubuike, Dedric Lawson, Malik Newman, Greg Ostertag, Terry Brown and Kylie Kopatich making their game debuts.

The full rosters will be released on Monday, with former KU All-American Wayne Simien coaching one squad and current Washburn basketball coach and former KU walk-on Brett Ballard coaching the other side.

Azubuike, who is still with the Utah Jazz and currently rehabbing an ankle injury, will be an assistant coach on Simien’s squad. He’ll be joined on the staff by Perry Ellis.

“Between the three of them, if their team doesn’t dominate the glass and points in the paint, something’s wrong,” Hanni joked.

As always, the VIP dinner will feature a theme to the evening and this year will be all about honoring champions in the wake of KU’s run to the 2022 national title. All five members of the panel that takes the stage to entertain with stories during the dinner will have at least competed in a Final Four, and the night will feature a special toast to the 2022 championship team as well as the 2020 squad that had its chance at a title taken away by the pandemic.

“We’re excited that some of those 2020 guys have made this their weekend to come back and we certainly want to honor them as much as we honor this year’s team,” Hanni said.

Two members of the starting five — Gomez and Langston — also will be on stage to share stories of their KU fandom and fight against cancer.

In addition to the return of all three events, the postgame autograph sessions will also return.

“For fans to have that type of interactive experience again, for the first time since 2019, we’re super fired up about that, too,” Hanni said.

Tickets to this year’s Roundball Classic are $15 apiece and can be purchased at 23rd Street Brewery in Lawrence, Johnny’s Tavern in Topeka and three Johnny’s locations in the Kansas City metro area.

For more information about the upcoming weekend and to learn more about this year’s beneficiaries, the history of the Classic or to donate, visit www.rockchalkroundballclassic.com.