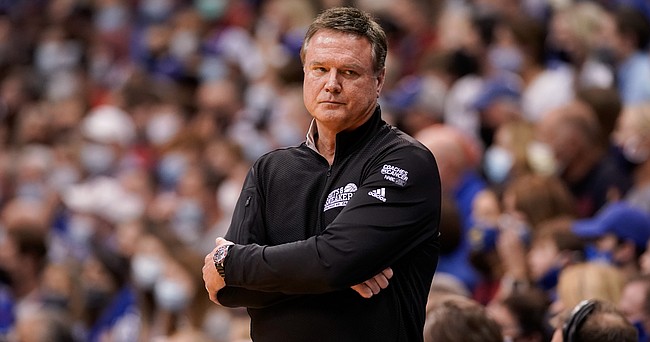 Kansas head coach Bill Self shows his frustration after a foul late in the second half of a game against Kentucky on Jan. 29, 2022, at Allen Fieldhouse.

Kansas men's basketball coach Bill Self and assistant coach Kurtis Townsend did not recruit in person over the past six weeks, a move that appears to be an attempt to lessen the impact of any penalties handed out in the wake of allegations of recruiting improprieties.

According to a report by CBS Sports, Self and Townsend were not in attendance at any AAU events during the four summer open evaluation periods, the last of which ended on Sunday. The reigning national champions were, however, represented by assistants Norm Roberts and Jeremy Case, meaning the Jayhawks were not completely off the road.

The decision was self-imposed and not mandated by the NCAA, which has for years been investigating Kansas for five alleged Level I violations. The organization has historically embraced any sanctions imposed by universities under investigation, but any resolution to the Jayhawks' case does not seem imminent.

Ten people were arrested on corruption and fraud charges in September 2017 amid an FBI investigation into illicit payments in college basketball recruiting. The NCAA handed Kansas a notice of allegations in September 2019, including a charge of lack of institutional control, and its enforcement staff alleged in May 2020 that Self and Townsend "encouraged" representatives with Adidas to steer top basketball recruits to the Jayhawks.

Kansas has vigorously disputed those allegations for years. The case has since been referred to the NCAA's Independent Accountability Resolution Process (IARP), which has provided irregular updates on the process since it began its review, and it seems unlikely it will be settled before the start of the season.

University officials have long held that they will no longer comment on the case, though athletic director Travis Goff said during Big 12 football media days in Arlington, Texas, two weeks ago that "unfortunately, there's not" an update that he could provide.

Despite the off-campus restraint, the Jayhawks have been able to host recruits on campus for official visits. Mikey Williams, a five-star guard from San Diego, and Taison Chatman, a four-star guard from Minneapolis, each were in Lawrence late last month.

Kansas is not the only program waiting to hear from the IARP on its infractions case. Arizona, Memphis, LSU and Louisville also have yet to be given a ruling.

Nothing better than swift justice or speedy trial. LOL

The article didn't really explain what advantage this provides to KU. What are they hoping to gain by having HCBS stay off recruiting? Could someone please explain it?

Also, it's unconscionable that this investigation isn't resolved. KU has already served a de facto punishment simply by allowing this could to linger over their program for so long.

As bad as issues are w/in the NCAA right now, with mass migration of schools chasing dollars, the ill-conceived thrust towards NIL, women's sports, the NCAA does itself no favors with pursuing this kind of investigation. Duke lacrosse team, anyone?

I’ve stated this before but I continue to be surprised by how many people are dismayed snd distraught by how long this process has taken, when the obvious result is that we’re FORTUNATE that the ruling didn’t come down last year as we likely wouldn’t have had that incredible title run to enjoy forever. Thank you AIRP for letting us get our banner first!!!!

Still Ted, simple logic tells you there is no excuse for dragging this stuff out. We have recruiting wise been on probation for years. Who knows what great players did not come to KU because of that dark cloud over our heads.

Ben - on the second part of your post, the NCAA cannot investigate like law enforcement can. They are very limited in what they can do. Since this grew partly from the fraud cases, and KU discovering things after the fact and reporting them, while holding out the player until the NCAA ruled them eligible, it has dragged on for years. KU then asked for the IARP to review the case, which took more time.

Thinking about this I feel the NCAA does not have a strong case. Yes a couple of players had violations, but those two were held out, one never played for us, when KU were made aware of the violations, they did not play. It is hard for KU to know some of these things, just like it is for the NCAA. The allegation made by the defense attorney in one of the fraud cases about us was made in closing arguments. It was not even presented in the trail.

Even with all that it sounds like something preliminary was shared with our staff, something is finally going to happen soon. Holding out Self and Townsend sounds like this will be part of the ruling. Limits on the coaches recruiting. I think the other things will be worse.

Hoping we do not lose any players because of this.

There’s not a lot of top talent in the 2023 class anyway. Look to the Transfer Portal.

Ben, This sentence seems to explains the potential benefit in voluntarily restricting the schools activities - “The organization has historically embraced any sanctions imposed by universities under investigation“.

In other cases, universities have declined postseason bowling or voluntarily reduced recruiting even before the actual penalties were announced. The self imposed penalties were sometimes enough or part of the final decision.

Coach could be sitting at home saying this was a really long season. I need to rest and spend time with my mom. Let’s self impose restrictions now rather than wait. If any recruits didn’t see Coach’s interest, then a little article explains why and it’s all good again.

Rodney - Lots of good points there. For full context though, this witch hunt/investigation goes all the way back to Cliff Alexander and the 2014–15 team. Because the ncaa didn’t have the investigation authority (as you mentioned), they couldn’t do anything, but they were sure. Was billy Preston next? Finally, they were able to hold Silvio hostage, and handed out a ridiculous penalty to make up for everything they couldn’t previously prove.

Fortunately, when appealed, even the rest of the ncaa had to admit that the penalty for that infraction was ridiculous though the damage was already done. The same thing is happening now.

Fortunately, Mark “Kansas City” Emmert will be out the door soon (?), so I think there will be even less political pressure to hand down anything close to what was alleged. There will be something.

The other thing we all need to keep in mind is that this isn’t just KU that’s being investigated. They’ve gone from 7 (?) to 5. They could complete several more and still not be ours. It does seem to indicate just how sad the original evidence was in this case.

When does football start? 😎

Dirk, there's a lot I agree with here (and other posters), but I'd be cautious to draw too much of a conclusion over what the NCAA has previously accepted and what the IARP will accept when handing out any potential punishments. The IARP is an unknown commodity that is (supposed to be) completely independent from the NCAA and its enforcement team. This doesn't mean that taking Self and Townsend off the road during July absolutely won't have some mitigating impact because I doubt they'd do it without some sort of guarantee or agreement in place, but NCAA enforcement is supposed to be removed from making the final decision here.

Looking at what NC State received from the IARP might better inform our potential punishment, but even that is tough to draw a clear comparison since this is such a new entity. They did have more total violations (9), and more significant ones in that a former assistant was found to be directly paying a recruit and they wound up with a season of vacated wins, a fine, probation, but no postseason ban. Considering the steps taken by KU to hold players out that were not fully cleared and the lack of a true smoking gun linking coaches making direct payments to players (that we know of in the public), there's the potential that KU gets something similar or perhaps Self and Townsend are suspended for a portion of a season or the postseason as was floated in rumors online.

Ultimately, we've probably been punished far beyond the ultimate decision from the IARP considering the negative press and recruiting hit we've taken since the FBI trial. That being said, we were favorites to win it all in 2020 and did just win a National Title with players that were overlooked and potentially wouldn't have been recruited years ago that developed into significant contributors, so perhaps that wasn't the worst thing in the world.

Well said Benny, and nice analysis of the of NCState. Definitely agree on not drawing conclusions, but the question was regarding the possible benefit of self imposed restrictions.

At this point, what kind of ledge does the NCAA have to stand on. They've drug this out for many YEARS, not weeks, months....... but YEARS. It has cost us in sponsorship and donations. It has cost us players in recruiting and in the transfer. It has cost us the opportunity to market ourselves better in these realignment talks. It has brought a stain to our University. It has been long enough and honestly, it needs to be done and over. I don't see how the NCAA, with a straight face can really do much about it now when they've brought in free agency. I believe that we are going to do some kind of "self imposed" BS and that will be it. If the NCAA had anything, they'd have already dropped the hammer. If we did something wrong, then fine. Give us the verdict. If you can't prove it and you just feel like we did, then it's time to move on. We're tired of waiting on Millionaires who are crooked as hell to judge a basketball team that has done nothing but brought positive to college basketball through the years.

It’s seems good to recognize that the “I” in IARP stands for independent. The ncaa originally said no new investigations. We got all the info you need. Trust us.

The IARP said, Thank you, and started their own investigation or 7 - a year or 2 ago.

The ncaa has plenty of culpability in the witch hunt, but they are no longer responsible for the timeline. Mr. Kansas City would love to have dropped a hammer long ago.

There needs to be a shot clock on these allegations.

Kind of unrelated, but doesn't it just feel like Jeremy Case is going to be the next KU Head Coach whenever BS retires? I know Norm and Kurtis have been with Self forever, but they don't seem to want to take the role.

Chad, I’ve always thought Jay Wright from Villanova would be the guy we go for. I’m hopeful this NCAA jazz does not cause Coach Self to retire. I’ve thought maybe Wright is just retired for a short time…