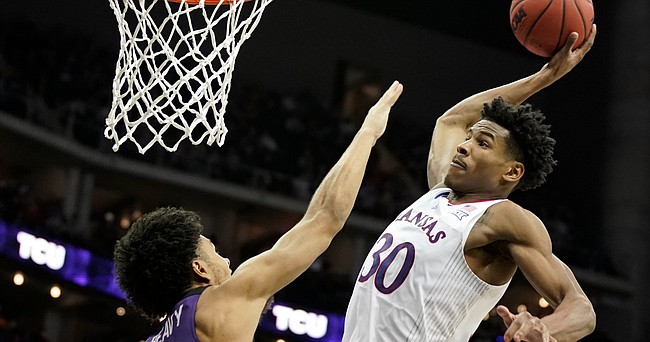 Kansas guard Ochai Agbaji (30) brings down a thunderous dunk over TCU guard Micah Peavy (0) during the second half on Friday, March 11, 2022 at T-Mobile Center in Kansas City.

Add one more honor to the list for Kansas' Ochai Agbaji.

Agbaji was named the Big 12 Male Athlete of the Year on Monday afternoon following a season in which he helped the men's basketball team win the NCAA national championship.

"What a great honor to be named this among all the athletes in the Big 12," Agbaji said in a statement. "It is humbling to be listed among Heisman Trophy winners, other national champions and great athletes. This would not be possible without my teammates, coaches and the KU support staff. We had a great run to the national title and it took a lot of people to get there, not just me."

A senior last season, Agbaji was also recognized as the most outstanding player in the Final Four, the unanimous Big 12 Player of the Year and a consensus first-team All-America player. He led the Jayhawks with 18.8 points per game last season, and last month was selected by the Cleveland Cavaliers with the No. 14 pick in the NBA Draft.

He is the fourth Kansas men's basketball player to win the award from the Big 12, which has named athletes of the year since it first sponsored competition during the 1996-97 academic year. Frank Mason III shared it with Texas swimmer Will Licon in 2016-17, Nick Collison won it in 2002-03 and Jacque Vaughn was the inaugural winner in 1996-97.

Oklahoma softball player Jocelyn Alo won the Big 12 Female Athlete of the Year award and, like Agbaji, finished her season with a national championship. The redshirt senior was also the Most Outstanding Player of the NCAA Women's College World Series and the Big 12 Player of the Year, and she finished her time in college with a record 122 home runs.

Kansas' nominee for the Female Athlete of the Year award was track and field standout Alexandra Emilianov, who won the Big 12 championship in the discus for the third time in May and was the runner-up at the NCAA Outdoor Track and Field Championships in June.

This year, nominees for the awards were submitted by Big 12 schools and selected by a media panel.

Always humble off the court but a killer on it. Great picture showing his intensity.

He was also an Academic All-Big 12 member too.