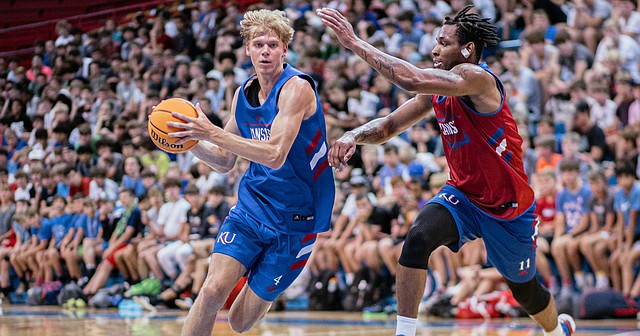 Kansas forward Gradey Dick drives the ball during the team scrimmage at the annual Bill Self Basketball Camp on Wednesday, June 8, 2022 at Allen Fieldhouse.

Kansas freshman Gradey Dick was in Los Angeles this week to take part in a celebration honoring 12 nominees for the male and female Gatorade High School Athlete of the Year award.

The honorees — six men and six women from eight different sports — were winners of the national Gatorade Player of the Year award in their respective sports.

Earlier this year, Dick was named both the National Gatorade Player of the Year for boys basketball and the Kansas recipient for the second time. Although he did not bring home the top award this week, it’s clear that the KU freshman views his Gatorade honors as just part of his portfolio.

“I’m thankful and everything for that,” he said this summer of the Gatorade recognition. “But in my mind, that’s just in the past. That’s all high school, and when I get to college it’s a clean slate and I’m like every other freshman.”

Colin Sahlman, a cross country star from California, was named the male national player of the year, and Kiki Rice, a basketball player from Washington, D.C., won on the girls side.

Since his arrival in Lawrence in early June, Dick has enjoyed every aspect of his jump from high school standout to low man on the totem pole at KU.

In June, he said the opportunity to test himself and his skills against tougher competition was a big part of the reason he made the move from Wichita Collegiate to national prep powerhouse Sunrise Christian for his final two seasons of high school basketball. And now that he is in college, he’s looking forward to similar tests and challenges in the months ahead.

“That’s kind of what my high school decision to go to Sunrise was (about),” Dick said. “To go to that next level and play against those guys and that competition. Going to college, I knew it was going to be a big change. But I feel like if you go 100% you can make it that much smoother. (Playing against that) talent is what’s going to benefit me the most.”

Growing up a Kansas fan and attending dozens of KU games throughout his childhood helped Dick become familiar with the program and the surroundings he now calls home. But the presence on the current Kansas roster of some of his close friends also has helped.

“It does,” he said. “But my personality is I get along with everyone. With this team, seeing how everyone acts with each other, there’s no one person that’s separate on this team.”

Dick and KU sophomore Zach Clemence were roommates at Sunrise Christian for one season. And Dick has known fellow-freshman MJ Rice since they first met at an Adidas showcase event in seventh grade.

While his existing bond with those two teammates has helped make the transition easier, Dick said the vibe associated with KU coach Bill Self’s most recent roster has been even better than he expected.

“I’ve heard from a bunch of guys that this team is hitting the ground running,” Dick said. “And that’s what our goal was and coach Self’s goal was after the championship, to kind of (start) where we left off — where they left off — and bring me and the freshmen in to just help as much as we can. The fact that we get along already at this early stage, I feel like that’s just huge.”

The reunion with Clemence, which Dick said felt like “we never left,” along with the intense team workouts and bonding opportunities has Dick even more excited for his first year as a Jayhawk than he was before.

The goal now, he said, was to continue to build that bond and put in the time and work on improving so that the 2022-23 Jayhawks can be in the best position possible to defend their 2022 national title.

“Kind of the overall game, to just get myself ready for the DI physicality,” he said of what he wanted to focus his efforts on this summer. “I feel like everyone’s got something to work on and I’ve just got to find mine.”