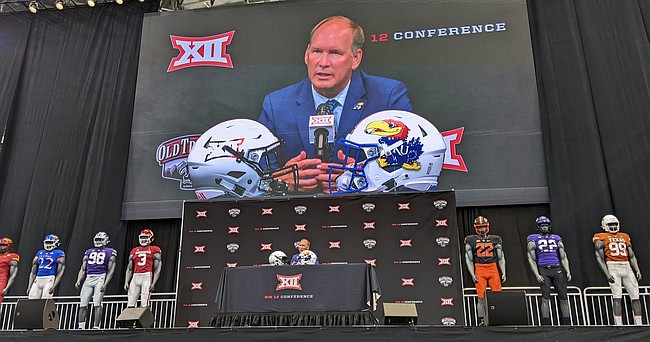 The question posed to Lance Leipold during the formal portion of Big 12 football media days last week was blunt.

"Kansas has beaten Texas twice in six years," a reporter asked. "What's up with that?"

Leipold, sitting at a table in front of a massive broadcast of the event, could only smile. For months, the Jayhawks' coach, assistants and players have gotten plenty of mileage out of the surprising 57-56 overtime victory on Nov. 13, with all maintaining that it is a sign that Kansas is on the verge of a turnaround.

With hundreds of members of the media gathered at AT & T Stadium in Arlington, Texas, Leipold had no problem using the opportunity to bring that back up.

"We've been starving for some wins, so any of them we're going to talk about," Leipold joked before elaborating.

"When you beat a program with the tradition and past success of the University of Texas and resources, all in all, it's something that we're going to be proud of. I've said this as well: To go down there at 1-8 and where we've been is probably one of the things I'm most proud of — that the preparation and that our guys kind of still were doing what we were asking."

Kansas, which also beat Texas in overtime at home in 2016, finished last season with narrow losses against TCU and West Virginia. Whereas their first losses were by an average of 31.5 points per game, their final two were by a combined nine.

That feeling led to players such as left tackle Earl Bostick Jr., who is entering his sixth season, to decide to return to Kansas, and safety Kenny Logan Jr., who is regarded as a team leader, to let his teammates know he was going to return for his senior year.

Leipold said he and his assistants have used the victory as a recruiting chip when reaching out to players from Texas. Three of the six high school players who have committed to play for Kansas as part of the class of 2023 are from the state.

"It made it easier to walk in some Texas high schools, to be quite honest, that there may be that chance that maybe we didn't get on young men before," Leipold said. "Now we have to build upon it, but it's definitely something positive."

The teams will play again on Nov. 19 at David Booth Kansas Memorial Stadium, but there's no guarantee of any future meetings. The Big 12 will expand to 14 teams next season following the additions of BYU, Houston, Cincinnati and UCF, and Texas and Oklahoma are set to depart the conference in summer 2025.

Leipold also acknowledged that the Longhorns were in flux as coach Steve Sarkisian, like Leipold, was in his first season.

"We probably hit them at a time when they were in a struggle and were able to take advantage of it," Leipold said. "But we know obviously this is a new year, new challenges."

Mayberry, a sophomore last season, played in all 21 games during his two years with the Jayhawks. He decided to transfer in April following the spring game and will rejoin his brother, Kyle, who played at Kansas before transferring to Utah State and is a graduate assistant for the Warhawks.

Interesting. Nine of the ten transfer athletes are landing at Tier II/III schools. But on the flipside, many of those coming in through the transfer portal are coming from Tier 1 schools. KU appears to be trading up, and that is good.

Rodney - I thought Coach made a subtle comment during the presser that is huge along those lines. No one that transferred was in the 2-deep.

It remains to be seen what the 2-deep will look like by the end of August, but my guess is that just about every one of the transfers will be in the 2-deep if not starting.

We obviously were starting from a long ways back, so even having by far the most returning starters/minutes is understandably met with cautious optimism. What has me even more optimistic though is the quality and volume of the transfers on top of the returners.

But, the transferred athletes (whom recently committed to the Jayhawks program) has me excited to watch the future progress Coach Liepold and staff will stamp on this football program.

Side note, I find it damn funny that U. of Colorado may soon be rejoin the Conference.

But, their respective football programs have NEVER been the same since leaving the Big XII Conference.

OU & Bevo fans may soon experience that same feeling of being in the middle of the PACK.

Coach Leipold is the very best coach in America...6 natys...and the guts to come here...where Weis and Miles...supposed."great coaches have failed."..Leipold will succeed...starting in 2025...we will be winning titles here....until then...it will be awesome to watch the step by step climb to the top of Everest...if you haven't bought your season tickets yet...lots of great seats are still able 30.,.40...50 yard line seats!!!!!...so join in on the fun and by doing so...you support the best university in America...so be a part of it!!!...Great history is going to made here!!!!...I BELIEVE!!!!