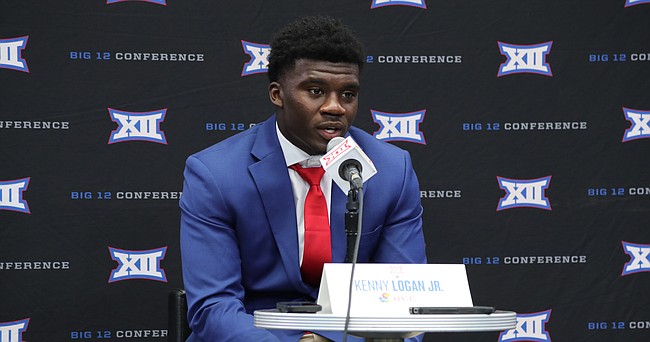 ARLINGTON, Texas — One of the first discussions coach Lance Leipold had with his players when the Kansas football team reconvened for the start of winter workouts in January was that they would need to begin to embrace internal competition.

No one's role was safe, he told them, and he stressed that not only would those on the team be striving to earn a larger responsibility the following season, others who would be joining the Jayhawks would be vying for playing time as well.

So when Leipold and Kansas' five-player contingent boarded their flight to the Dallas area on Tuesday for the start of Big 12 media days, unofficially kicking off the football season, senior safety Kenny Logan Jr. reminded Leipold of what he said.

"You said you were going to create a culture of competition — and you've done that," Logan told him.

When Kansas begins its second season under Leipold on Sept. 2 at home against Tennessee Tech, it does so believing it has addressed some of the main issues that plagued it in Year 1: a glaring lack of depth at key positions and a team that was heavily on youth and inexperience.

An additional year, by nature, helps with the age discrepancy. It's the experience that could not be addressed organically, so to solve that, the coaching staff added 19 players via the transfer portal, the most of any Big 12 school.

Logan, who led the Big 12 with 113 tackles last season, spent the entire spring practice period working alongside three players who will be sophomores in O.J. Burroughs, Edwin White-Schultz and Jayson Gilliom.

Once that period ended, however, Leipold and his staff identified safety as a position of concern, and he added a quartet of transfers in Purdue's Marvin Grant, Eastern Michigan's Jarrett Paul, Palomar Community College's Jalen Dye and Utah State's Monte McGary, who is more likely to play cornerback.

Their additions, however, could block the opportunities from those who spent last year and beyond with the Jayhawks. Grant, in particular, figures to start ahead of Burroughs. Leipold's message to anyone with concerns has been simple: "If you're not going to embrace the competition in the room, that person or our team will never get where we need to or want to be on Saturday afternoon."

"It's part of the new way of what's going to happen," he said Wednesday, "but I think overall, our team has handled that really well."

Leipold's push to manufacture competition among players was evident during his formal press conference when, given the chance, he declined to state the obvious — that Daniels will be the Jayhawks' starting quarterback.

Daniels, who replaced Jason Bean in that role for the final three games last season, joined Logan, Neal and left tackle Earl Bostick Jr. at the event. He discarded the idea that he and Bean are competing, suggesting that the label carries a connotation that betrays the strength of the relationship they have as friends.

Rather, Daniels said, he'd prefer to think of competition and depth as insurance against injuries or illnesses. After all, it was an injury to Bean that led to Daniels assuming the starting role beginning with the surprising 57-56 overtime win at Texas in November.

"I said it last year before the season and I'll say it again: The only person I'm competing with is myself," Daniels said. "At the end of the day, it's a you-versus-you mentality. If you feel like you're not able to compete with the ones around you, that just means that you don't feel confident in what you can do."

Logan understands that, too. Whereas some of his younger, longer-tenured teammates may have experienced frustration about their paths to the field being limited, they recognize that vying with proven players for opportunities will raise their games.

And, if not, they can at least benefit from the possibility that they pick up a redshirt they missed out on during their first seasons at Kansas.

"I try to talk to those guys all the time, but those guys are feeling how I feel about the whole situation," Logan said. "They're open to it and they want them guys to help them grow, too. We're all just trying to push each other, so there's no man who's like, running from it or trying to run from competition. We're all embracing it with an open head and we're trying to push each other to the highest level."

I think this is a great indicator of where the program is headed with HCLL and his staff. Great programs are not afraid to recruit over the top of their current starters, and either those current players will take it as a challenge to get better to retain their spot, or they will accept it and look for other opportunities. I think that can obviously rub people the wrong way and it can be seen as the coach running off players to get his guys, but the reality is that if this is presented the right way, and it appears that it has, then this isn't directed to the current players as a knock on them, but a challenge and an opportunity to improve themselves personally and the team as a whole.

I think we've seen year after year Self and his staff have taken the same approach with the basketball team. Look no further than the center spot when Landen Lucas was on the team. Each year, Self would go out and find someone new to play that spot and it seemed like each year Landen would beat that guy out by raising the level of his game and forcing his way onto the court. That competition helped both him and the team to improve and a similar approach should help the football team.

19 transfers illustrates the hole we’ve been digging out of for the last 6-7 years. We might not be 85, but it seems like we will be close.

I think we lost 12 transfers out, which is a lot when you’re trying to rebuild a roster, but Coach made a great distinction. We didn’t lose anyone from the 2-deep. That’s a big upgrade and we’re fortunate that they repealed the 25 player limit, but then I think more and more teams are.

I hope the NCAA, should they still exist in two years, decides to permanently eliminate the 25 rule and not just allow the change for these two seasons.

Dale - As more and more players transfer, it’s going to become imperative for the big dogs and everyone to be rid of the 25 player annual limit.

KU football is improving but it’s still, by far, the worst program in the Big 12.

If we don't have 85 scholarshipped players, there is an issue. We should have been loading up because of these 2 free years. We dug into this hole for 12 years. Miles was digging out of the recruitment issue. Leipold was given a dream of no caps, yes that means he could lose his top players or they may opt out, but that was happening anyways. Ultimately, we get a chance to reset and we better.

Jeff - One of the nice aspects of Leipold vs Miles is that we have Srs coming back for super years vs the previous mass defections. I think it is something like 10-2. We aren’t losing the top players. No one from the 2-deep.

Next year finishes the reset. The change came too late in recruiting to be completely effective this year. No sense filling a seat at this point if not an upgrade.

Dirk...I agree...I also think Miles was the first coach that wasn't doing a knee-jerk to transfers, that he was getting high school players for development; hence why we were "young" in Leipold's first year. We did see some coaching last year. We should be able to clear all of those blue and gray and whatever other shirt colors they track.

My point was that if we are sitting at 58 or 62 scholarshipped players after this free period for 2 years, we have missed a huge opportunity. And we should be balancing our plan for 25 a year

Jeff - It seemed to me that after the first year, Miles did a bit of a knee jerk in the other direction. That’s why so many upperclassmen were transferring. For a regular year, we had a high % of returning starters, but were farther behind because most of the other teams had super seniors.

The good news is we’re no where near 60. I think we were about 70 when Miles took over, and were more than that last year.

Also read another article about LBs. That McCaskill played by far the most snaps on his former team and our LBs played 20% more. That’s a lot of wear over the course of the game. The transfers might provide a quality of play improvement but even more so will provide depth and freshness through the game. Sometimes just that little bit of freshness could be the difference between making a stop and getting off the field vs allowing a drive to continue to points.

What Brock said is a Crock!

Give the Guys a Chance!