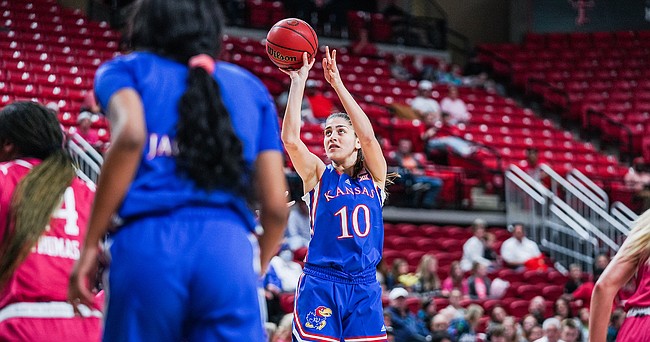 Four players on the Kansas women's basketball team have been chosen to represent their countries at the FIBA U20 Women's European Championship, which begins Friday.

All four have experience playing for their countries — especially Chatzileonti, whose performance in the FIBA U16 Women's European Championship in 2018, when she was selected as the tournament's most valuable player, preceded her arrival at Kansas.

"We are obviously excited for all of those players who are part of our program to be selected to participate on their respective national teams," coach Brandon Schneider said. "It is a tremendous honor and I know that all of them will represent their countries in a terrific manner."

Chatzileonti, who averaged 9.9 points and 5.6 rebounds per game last season at Kansas, won a silver medal in Division B of the FIBA U18 Women's European Championship in 2019 and was the second-leading scorer as the youngest player on her team.

Papadopoulou was selected to Greece's U18, U16 and U15 teams, Strom played on Sweden's U18 and U16 teams and Telegdy played for Hungary in the FIBA U16 Women's European Championship in 2019 and the FIBA U19 Women's Basketball World Cup last year.

Laia Conesa, a guard from Barcelona, Spain, who has committed to play for Kansas in April as part of the class of 2023, will also be representing her country in international competition.

Conesa has been selected to play in the FIBA U17 Women's Basketball World Cup, which begins Sunday and will be held in Debrecen, Hungary. The 16-team event will also include the United States, which is led by LSU commit Mikaylah Williams, the No. 1 player in the class according to the ESPN HoopGurlz rankings.

Schneider will attend the tournament and the FIBA U18 Women's European Championship, an eight-day event beginning Aug. 6 in Heraklion, Greece.

Can only help KU. Not much better way to stay sharp ion the Jayhawks' off season.

Hope they all do well.