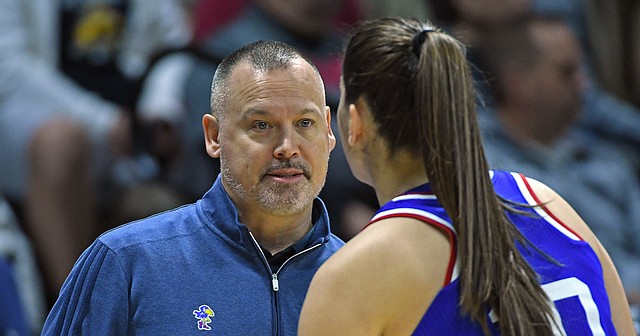 After it qualified for the NCAA Tournament last season for the first time in nearly a decade, the Kansas women's basketball team has conceived a significantly stronger nonconference schedule that coach Brandon Schneider hopes should better prepare the Jayhawks for the postseason.

That schedule, released Wednesday, includes a home game against Texas A&M and road games against Arizona, Nebraska and Saint Mary's — all of which were included in an attempt to increase the team's NET rating at the end of the season and, therefore, its chances of earning a better NCAA Tournament seed.

Kansas finished 21-10 last season, including 11-7 in the Big 12, and qualified for the NCAA Tournament as a No. 8 seed. After a first-round win over Georgia Tech, the Jayhawks lost to No. 1 seed Stanford, ending their first tournament run since 2012-13.

All but two players from the late-season run will be back for the Jayhawks, who were fifth in the Big 12.

"I think we had a real intentional effort to upgrade our schedule," Schneider said. "I think you always schedule relative to your roster, and with the returners that we had, we felt like we could be a lot more aggressive and just try to build a better NET rating in hopes that if you have the kind of year that culminates in a tournament appearance, that you've done everything necessary to get the best seed possible."

The marquee game will be a home date with Texas A & M, the first in a home-and-home series, which will take place on Thursday, Dec. 1. The Aggies, who will be led by first-year coach Joni Taylor following the retirement of Gary Blair, went 14-15 last season but had reached the Sweet 16 in the three previous NCAA tournaments and captured the national championship in 2010-11.

They are likely to be the highest-profile nonconference opponent to play at Allen Fieldhouse since Cal, then ranked No. 10, did so in December 2014.

"It's obviously the highlight of the schedule, and I would hope that all involved are doing everything they can to get 8,000 to 10,000 (fans)," Schneider said. "I think that's got to be the most aggressively marketed game, home game, on our nonconference slate."

Kansas will travel to Arizona, the NCAA Tournament runner-up in 2020-21, on Thursday, Dec. 8. The Wildcats went 21-7 last season but, as a No. 4 seed, were knocked out of the tournament in the second round by North Carolina.

They averaged 7,822 fans for home games last season and will provide the Jayhawks with one of their more difficult environments.

Nebraska, which Kansas will face on Dec. 21 for the first time since 2018-19, went 24-9 last season and also claimed a No. 8 seed in the NCAA Tournament but lost to Gonzaga in the first round.

"I would say we have three games on the schedule, for sure, that are all top-20 NET games — if not the potential to be top-15 to top-10 NET games," Schneider said. "Last year, it was Tennessee. We had one of those in the noncon and it was a neutral floor, and now we're three of those and two on the road."

The game at Saint Mary's, which went 18-15 last season, will be played as part of the four-team Saint Mary's Thanksgiving Classic. The other two participants have not been confirmed, but the event will take place Friday, Nov. 25, and Saturday, Nov. 26, in Moraga, California.

Kansas will open the season Wednesday, Nov. 9, at home against Jacksonville, then will host UT Arlington, which went 20-8 and made the NCAA Tournament as a No. 14 seed last season, on Wednesday, Nov. 16. A game against UTRGV follows on Sunday, Nov. 20, before the Jayhawks travel to California.

The Big 12 portion of the schedule has yet to be released.

Schneider said he had players ask him last season, after the NCAA Tournament loss to Stanford on its home floor, how the team can improve its seeding to avoid such a scenario unfolding again.

"There's lots of steps in doing that," he said. "Obviously, win more Big 12 games. How you play, how you win — that matters in the NET formula. But also, can you show the selection committee that you made an effort to go out and play a challenging schedule — and in particular, are you willing to go out and play on the road?"

He believes the Jayhawks have shown that they are.

"I think if we can continue to build and take the right steps in our program, then I think you can see us continuing to play a tough nonconference schedule," Schneider said. "Just in years past, we had maybe some teams that weren't ready for that, and we decided as a staff that we have the team that's ready for those kinds of challenges.

"It doesn't mean we're going to win all those games, but even going on the road and coming up short does a lot more for you in a lot of respects than it does to beat a much lesser opponent at home. It just doesn't bring the same type of value."