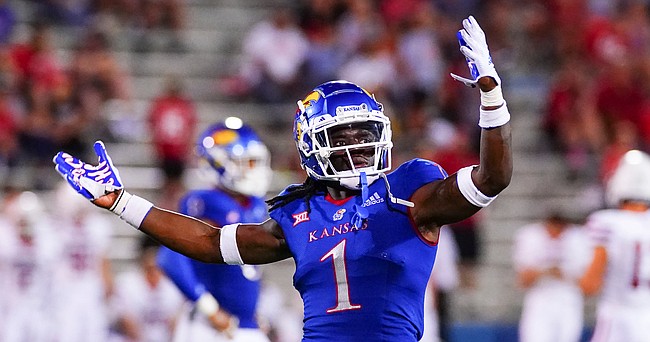 Kenny Logan Jr. is still gaining attention for what he accomplished last season.

The Kansas senior, whose 113 tackles were the most in the conference by a safety, was selected to the preseason All-Big 12 team on Wednesday.

He was the only player on the Jayhawks recognized by the conference, which named 29 players, including five defensive backs, to a first and a second team.

Logan, an All-Big 12 second-team player last season, also forced two fumbles, recovered one, had an interception and broke up six passes. He had a season-high 15 tackles in the 31-28 loss at TCU on Nov. 20 and followed that with 14 tackles in the finale, a 34-28 home loss to West Virginia on Nov. 27. He also finished with at least 10 tackles in three other games last season.

A starter since 2020, Logan is expected to resume that role this fall for the Jayhawks, though the back end of the secondary will look different than it did a year ago. Ricky Thomas, who started 11 of 12 games alongside Logan, was a fifth-year senior, and he will likely be replaced by Marvin Grant, who started all 13 games for the Boilermakers last season and finished second on the team with 52 tackles.

Three other experienced safeties will return to Kansas in Jayson Gilliom, O.J. Burroughs and Edwin White-Schultz. All played in every game last season as true freshmen, with Gilliom starting three games and Burroughs starting once.

Oklahoma was the only other school with one player selected. Kansas State had six, Baylor had five, Iowa State and West Virginia had four, Texas and Oklahoma State had three and TCU had two. No Texas Tech players were honored.

Kansas has chosen Logan, quarterback Jalon Daniels, running back Devin Neal and left tackle Earl Bostick Jr. to represent the team alongside coach Lance Leipold at Big 12 Media Days, which will be held next week at AT&T Stadium in Arlington, Texas.

It will be the first in-person appearance for all five of the Jayhawks' representatives. Leipold and Logan participated in the event last season, though they did so remotely as they were unable to travel to Texas because of storms in the area.

Representatives from Kansas, Kansas State, Baylor, West Virginia and Oklahoma State will speak on Wednesday, followed by those from Texas, Oklahoma, Texas Tech, TCU and Iowa State on Thursday.

Only one ou player. When was the last time that happened?

Hopefully, Kenny has an even better season this year and finishes with half as many tackles. It’s not a great sign when your safety is stopping plays.

It would also be great if we got back to having multiple players receiving awards. I think we got up to about 6 players 4 seasons ago.

Duh. Mr. Logan is the real deal. Hopefully the KU coaching staff has surrounding him with other under the radar stellar players so that the defense can keep KU in some games.

Andy - I don’t know that they’re necessarily under the radar, but the staff has done an excellent job using the portal to augment what has been

What has been one of the youngest rosters in CFB. Most preseason pubs have taken notice.

We have by far the most returning starters so that every position has one or a quality transfer and sometimes both.

While it is encouraging that we are returning a lot of starters (with experience), let’s not get too “giddy”. We were the worst in the Conference in almost every single category on defense. We were second to last in the NATION in 1. Tackles for loss (thank you Akron), 2. Scoring defense 42 points per game (thank you UMass), 3. 3rd down conversion defense (thanks again Akron). Lllllloooonnnngggggg way to go people, long way to go.

Steven - Definitely agree regarding giddiness and where the rankings were for the entire season.

Hopefully there are a few factors beyond the number of returning starters that are encouraging for you: 1. The players were also among the youngest in the nation. It was like the JV team playing the varsity. We had a 260# freshman DT who’s now 300. That’s a lot of improvement. 2. This will be the closest we’ve been to a full roster since TG was here. Roster depth is even more important for young players that haven’t developed as much stamina. 3. The stats were for the full season and most observers have recognized the significant improvement from the beginning to the end of the season. Which leads to 4. The staff has had spring ball to install their program and culture.

Any of those factors in isolation is minor. When combined one on top of another, there does seem plenty of reason for optimism. There was plenty of ground to be made up, but maybe not as much as the full season stats would suggest.