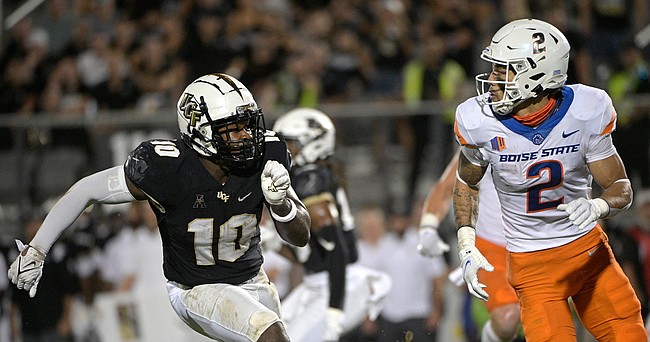 He can't wait to be that again.

Gilyard shuffled between schemes and responsibilities at UCF last season and was rotated and then squeezed out of the Knights' 4-2-5 defense under first-year head coach Gus Malzahn and his pair of defensive coordinators.

By October, the two-year starter with 197 career tackles had enough and decided to transfer. In January, he enrolled at Kansas and was one of eight players to join the team before the start of winter workouts.

Gilyard, who is 5-foot-11 and 235 pounds, was able to preserve a redshirt year by playing in only four games last season and will have two seasons of eligibility remaining.

His addition, along with those of Craig Young from Ohio State and Lorenzo McCaskill from Louisiana, should fortify a unit that, like the rest of the defense, had to rely on inexperience last season.

"I feel like just the opportunity that I have here, (it's) as far as being able to play, being able to show what I can do, coaches, scheme, and honestly, I like challenges," Gilyard said. "It's no surprise that Kansas isn't as good as they should have been last year and I want to be a part of the change that comes with this program — that I know will come."

A four-star prospect in the Class of 2018 from Trinity Christian Academy in Jacksonville, Florida, he had scholarship offers from nearly two dozen schools, including Clemson, LSU and Michigan, but committed to UCF in October 2017 during the Knights' undefeated season.

After he decided to transfer, he narrowed his choices to Kansas, Arizona, East Carolina and Bowling Green, then chose the Jayhawks in December.

"A lot of guys would go, 'OK, I'm going to go to Alabama,' or things like that," Gilyard said. "They'd go to a school where they're already good. Why not go to a school that's up and coming and be a part of that? I feel like that's the challenge that I want to take on."

Although he didn't discuss playing time with Kansas' coaching staff during his recruitment, he rotated, as expected, with the first and second teams during spring practice as he adjusts to the specifics of Kansas' 4-3 scheme.

"Eriq Gilyard is probably a true inside backer, a mike backer for us," defensive coordinator Brian Borland said during spring practice. "He's kind of built that way. If you watch him long enough, he's kind of got a feel for diagnosing things and moving and crisp angles to get to the ball, which I think that really plays to his strength in the box. He's probably not an out-of-the-box kind of linebacker, so that's probably where he's going to go. ... There's a lot to learn at that position. There's a lot to be able to communicate, so there's a lot on that guy's plate. He's embraced that role. He doesn't say a word. He's just all about it."

Young, who was primarily a safety at Ohio State, believes his transition to playing weakside linebacker and nickelback at Kansas during the spring was often helped by Gilyard's knowledge and experience.

"I just know somebody is inside of me that's going to run down and fit his guy up and tackle the ball real well," Young said. "It's just great knowing he's right there beside me and I'm very comfortable that there are some plays I don't have to make because I know Eriq is right there to make them plays."

Gilyard received his bachelor's degree in communications and has enrolled in a master's program in sports management at Kansas. He would like to be an athletic director at a high school someday because, if he can do so, "I'll be able to impact a lot of kids' lives the same way that some people in my life impacted me and they were important to me," he said.

For now, he hopes to make a significant impact at Kansas.

"I'm confident in my skill set and what I'm able to bring to the table," he said. "That's part of the reason why I felt comfortable coming here."

KU desperately needs run stoppers in the middle. Someone who can actually stop a running back at the point of contact and push him backwards instead of riding in for 2 to 3 extra yards. Hopefully between the new faces and the returning linebackers they can stop the run, cover running backs on pass routes, and at times pressure the quarterback. KU football is always exciting before the season starts. Hopefully it will remain exciting during the season. Rock Chalk.

Gavin Potter is the returning starter at middle linebacker and he is a former wrestler!

Gavin and Gilyard will be competing for playing time at this critical position.

Sounds like a great addition in this spot. If they didn't think they needed help in the middle, they wouldn't have brought in a two-year transfer. Wouldn't surprise me to see him in the starting lineup from day one.

One thing that I read from one of the coaches was that they needed depth for competition. And, of course, you need depth just for depth. This team should be considerably better this year, far more competitive. I'm excited.

Didn’t Gavin step away from the program for a week or so around December? That would seem to be associated with the concept of “they need help”, AKA you’re not good enough.

IIRC, He came back fairly quickly, after talking with Coach Leipold. My guess is that he communicated more the latter part of Brett’s comment and dispelled the former. Every good team has competition and depth.

It probably doesn’t hurt to have an unquestioned leader/starter, even though he’s young (Devin Neal), help recruit competition for his own position.

Some improvement will come with the young guys maturing; physically and mentally. Some of if will come by bringing new guys. Getting closer to 85 will help as well.

Really excited for the coming season, and totally agree with you Andy. While I’m not predicting we’ll get to there, I do think there will at least be some discussion about bowling this year. At a minimum, I hope we’re done as a mainstay in the Bottom 10.