Could Kansas’ Jalen Wilson be in line for Big 12, All-America honors? 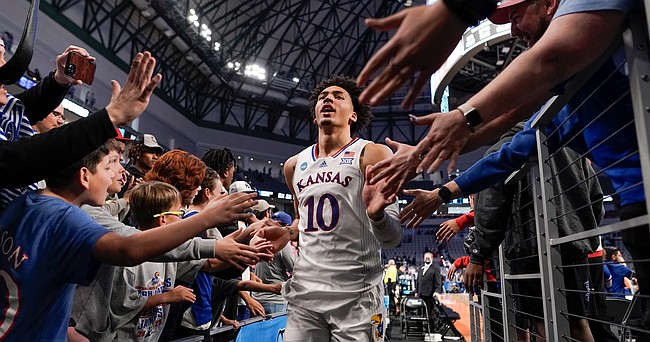 A sea of hands reach out to slap hands with Kansas forward Jalen Wilson (10) and the Jayhawks as they leave the court following their win over Creighton on Saturday, March 19, 2022 at Dickies Arena in Fort Worth, Texas. The Jayhawks advanced to the Sweet 16 with a 79-72 win over the Bluejays.

The Kansas men's basketball program is no stranger to high-profile players receiving serious praise before a season even begins.

And Kansas coach Bill Self believes returning junior Jalen Wilson could be the next name added to the list of Jayhawks who have received preseason accolades entering a season.

Asked recently if he thought Wilson's decision to return to KU for another season positioned the versatile wing to be in the mix for Preseason Big 12 Player of the Year, Self said he absolutely thought Wilson should get "great consideration" for that honor.

"You know how much that means, though," Self added.

After all, entering the 2021-22 season, it was KU newcomer Remy Martin who was named the conference's preseason player of the year. Yet, because of injuries and the time needed to adjust to new surroundings, Martin did not even wind up receiving an honorable mention nod when the official all-Big 12 awards were handed out at the end of the regular season.

That didn't slow him down any in the postseason, of course, but until then Martin was far from the conference's MVP last season.

Wilson is a bit of a different story. There will be a new role for the fourth-year Jayhawk during the 2022-23 season, but it will come in a familiar environment and with familiar faces surrounding him.

Those two factors should cut down on the time required to adjust to the role and both Self and Wilson are eyeing big things for the Denton, Texas, native during his junior season.

"If J-Wil has a great year and shoots the ball decently, guys, he could be an All-American," Self said recently. "I'm not predicting it yet. I'll wait and study it."

Wilson, who took his decision to return to school down to deadline day, had no problem hearing that those expectations had been hoisted onto his shoulders.

"I agree," he said when asked about Self calling him a potential All-American. "I'm very confident in my game and I'm thankful my coach is confident in me, as well."

Both Self and the NBA folks that Wilson spoke to throughout the pre-draft process pointed to the same element of Wilson's game when trying to identify where he can make the biggest gains.

"The biggest thing was just shooting," Wilson said. "My numbers last year weren't that good, especially from the 3-point line."

The question now is simple: Can Wilson improve his outside shot? And if he does, will that be enough to move him into position to be considered the best player in the Big 12?

Self believes the answer is yes, saying that Wilson isn't quite where 2022 Big 12 Player of the Year Ochai Agbaji was as a pure scorer entering last season but adding that he's probably ahead of where Christian Braun was. Both of those former Wilson teammates were first-round picks in the recent NBA draft.

"He's more than capable of doing that," Self said of Wilson improving as a 3-point shooter. "He just hasn't done it yet. But there's nothing wrong with his stroke. It's not pure yet, but I'm a big fan. … I can't imagine Jalen not having the potential to be a middle-double-figure scoring guy for us."

Here's a quick look at some of the other likely contenders for Preseason Big 12 Player of the Year:

• Mike Miles Jr., TCU — The top returning player on a team that many expect will compete for a spot in the top half of the conference — if not higher — had a great season last season and has all the elements required to be the league's top player. He's a terrific scorer at multiple levels and a fearless competitor and improving passer.

• Adam Flagler, Baylor — A case could've been made for Flagler, and not former teammate James Akinjo, to land on the all-Big 12 first team last season. But injuries kept him from cracking the top five. If healthy, he should have no problem landing on that list this season, and he's arguably the most talented all-around offensive player in the conference.

• Timmy Allen, Marcus Carr and Tyrese Hunter, Texas — With all three UT players having the potential for monster seasons, it's easy to see how they could wind up hurting each other when it comes time to vote for just one. But if one of them emerges as the guy for the Longhorns, his role, along with Texas' potential to challenge for a Big 12 title, could put that player in position to earn the league's MVP award. Allen's the most versatile of the bunch. Carr might have the most upside. And Hunter, who transferred from Iowa State, will have to adjust to his new surroundings quickly to land on the MVP radar.

• Tre Mitchell, West Virginia — Kansas fans will remember Mitchell's banked in 3-pointer in Austin that led to a Longhorns victory. But his game is about much more than just luck. Mitchell has the size and skills to be a force and could emerge as a go-to scorer for Bob Huggins' Mountaineers next season. The question is how quickly he'll get there and whether WVU can do enough, as a team, to put him in position to win this type of award.

Wow. What an offseason headline during a holiday weekend.

I am waiting for the steaks, I'll bite lol. Yes JW would be our most accomplished returning player. He needs to be the franchise player most games, improve some areas of his game, and if I may borrow a line from Matt's OA's article last year about lofty goals, be more assertive. Look for his game. 15ppg, 50%fg (26% from 3 is not great), 10rb at a min. Bring his ft% up a little. I could see a year like that he could be AA for sure.

I agree. Jalen is already a good rebounder. I think what he might need to improve the most is looking for his teammates when he's driving to the basket. Yes, 40% from 3 would get him to 15pts. per game. Get his FT percentage up 10 percentage points, he could get to 17 or 18 a game.

If JWil can raise his 3 to 40+ in the noncon so it can regress to high 30’s when things get tighter in conference, it will open up the rest of the game for him to exploit all the more. He’s already really dangerous on drives, the boards, and break. In the tourney, the opponents were regularly leaving him wide to sag into the lane.

It would really help if Kevin and Dajuan could also improve their shots another 4-10%, as well as whoever fills in the last 2 spots. The great news is the possibilities are excellent. It should be another high octane O year. Hopefully, Kevin and Dajuan can lead them to strong D as well.

The 2002-2003 team should be a pretty good team on defense. Offense? Uh, probably not particularly efficient.

Robert Another crucial factor will be who the other two starters are. We already know that 90% Kevin, Jalen and Dajuan. But the other two starters have to be able to score enough to keep teams honest. Jalen needs good shot selection and improved accuracy at the same time. We should all remember that the Natl Champions won to a great extent because everyone contributed, Abaji, did not have a great tournament, and yet the strength of the team was greater than the sum of its parts. Jalen has all the potential in the world to be an AAmerican, but he needs to do it within the system, and bring out the best in the players around him also.

I believe that Ude is going to play a lot at center spot, even if he does not start. And Gradey and MJ will fight it out for the other wing spot, with whoever loses being the sub for the other three and getting a lot of regular minutes.

Center is really out biggest question mark. We just don't know yet.

Layne - Don’t sleep on KJ. We already know he’s one of the best defenders, which Coach loves, and enough so that he became the go to sun in crucial moments during the madness. He even initially had the assignment on Love til CB stepped in. There have been some reports that he’s already improved his O game significantly since last year. So many possibilities.

We also know that Coach loves multiple ballhandlers, and that Pettiford was working his way towards increasing minutes before he was injured. Maybe he’s just a sub behind Dajuan, though Coach wasn’t afraid to go tandem small guards last year. So many possibilities.

Our defense will be our calling card early. The offense will have to work itself out through the season. We have a lot of talent fighting for minutes. We might not peak until tourney time again. But Jalen will be our on-court leader.

Jalen could be Player of the Year nationally, forget conference. He is on the cusp in so many ways - if he can take things up one more level, he'll be a dominant force. I think that he will.

Jalen will have to take a massive step forward to wrestle the national award away from Oscar.

Robert Brock must be listening to Jethro Tull's "Living in the Past".

I'm confident that his 3pt shooting will improve dramatically. What I'd really like to see is being able to drive left to the hoop.