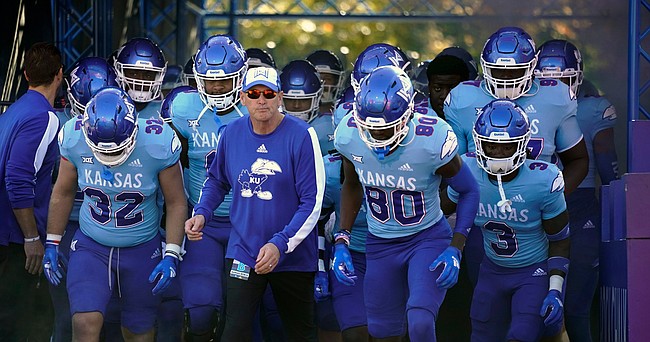 Logan Brantley, an outside linebacker from Englewood, Colorado, became the latest player to commit to play football at Kansas when he did so on Friday.

Brantley, who is 6-foot-2 and 205 pounds, chose the Jayhawks' scholarship offer over one from Washington State, though Colorado, Minnesota, Arizona, Army, Air Force and others also have extended them.

"It feels great," Brantley said. "I feel like a lot of stress is off my shoulders now and I can just be locked in with school, so you know, it's a great feeling."

"I just kind of felt like I saw what I needed to see," Brantley said. "After that Kansas trip, I kind of knew where I was going to go."

Brantley is the sixth player in the class of 2023 who has decided to play at Kansas and the fifth who was in Lawrence for an official visit that weekend to do so. The others — wide receivers Surahz Buncom, Jarred Sample and Keaton Kubecka and defensive end Tony Terry Jr. — did so during their time in Lawrence or shortly after it ended.

Kansas earlier received a commitment from Taylor Davis, a safety from Missouri City, Texas, who visited the school a week after Brantley did.

The school also received a commitment Thursday from Lorenzo McCaskill, who is also a linebacker and will transfer from Louisiana in order to be eligible this season.

Brantley, who plays at Cherry Creek, picked up a scholarship offer from Kansas on March 1 and made an unofficial visit to campus for a spring practice on March 26.

He projects to play a hybrid weakside linebacker/safety role for the Jayhawks, who are likely to turn to Ohio State transfer Craig Young to play that position this season. Brantley said he was happy when linebackers coach Chris Simpson, who handled much of his recruitment, told him that position is what they think he'll play.

"I feel like they can expect a lot of energy, me being a vocal leader and just seeing me fly around the field making plays," Brantley said.

Brantley is also a three-time state champion as Cherry Creek won the Colorado Class 5A title in each of the last three seasons. He now wants to focus on capping his senior year the same way he did the others.

"I really want to lock in and get that fourth ring," Brantley said. "Just really being a vocal leader and try to be a captain again this year. Just trying to get the team to lock in and all achieve a common goal."

Congratulations! A great pick up at a position of need. Rock Chalk!

All recruits so far have a 3-star rating, which is pretty impressive for this program at this time. I really thought that this first recruiting year would be about finding all of the diamonds in the rough, guys with no P5 offers who have the potential to be P5 players. It's really early, but if you aren't impressed by these results, then you are living in a dream world. It really could not be any better at this point.

Brett - Very reasonable if you don’t consider the transfers that have already joined the team. The transfer class is being talked about as one of the best in the nation. It’s not like it’s a bunch of guys with questionable backgrounds or conditions needing a second chance. It’s a bunch of quality players and basically being plugged into voids in the starting lineup.

HS recruiting always takes longer - relying on those longer term relationships, hence the validity of your comment. I think we’re going to see a significant turnaround right from the start this season and then watch recruiting blow up.

And Dominick Puni, an offensive tackle, from Central Missouri has just transferred in per jayhawkslant.