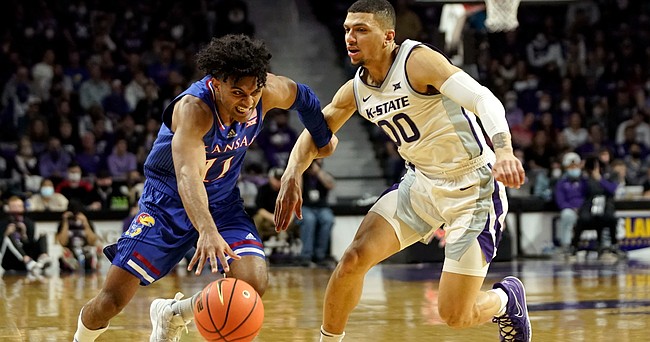 Kansas basketball coach Bill Self said Monday that KU guard Remy Martin was currently operating at 60-70% and that conversations were being had about resting him for longer than portions of games.

“We’re talking about a lot of stuff,” Self said Monday. “But it would probably benefit him to rest. That’s a discussion that he’ll have with the doctors and trainers and everything.”

Still bothered by a bone bruise in his right knee that has limited him since late December, Martin has played sparingly during the nine games since he injured the knee late in a win over Nevada. He is averaging 19.1 minutes per game in Big 12 Conference play and has missed three games entirely.

Self reiterated Monday that Martin’s availability remains a pain issue.

“Same thing that we told you a while back, it’s day to day or week to week or whatever,” Self said. “But all it takes is one little time to get nicked up and (he) goes backwards a little bit.”

The Arizona State transfer and preseason Big 12 player of the year was limited to 14 minutes in last Saturday’s loss to Kentucky and showed signs of the injury slowing him down throughout that time. One possession that Self pointed out came while Martin was guarding Kentucky's Kellan Grady.

“He’s playing on a leg-and-a-half,” Self said. “Can’t move. … Grady faked one way and went the other way and there’s 20 feet of separation. (Martin) just couldn’t plant and push off and go. He’s trying. And I respect, totally, him trying to be out there. But when you’re taking a third or a quarter of the reps in practice and you’re just trying to get through it, that’s where I feel like he is right now.”

Self said Martin had not done anything new to the aggravate the injury.

Kansas basketball coach Bill Self on moving past Kentucky, Remy Martin's health & what's next for KU by KUsports.com

Kansas guard Christian Braun on getting back to work with games at Iowa State & vs. Baylor this week by KUsports.com

Kansas forward Mitch Lightfoot talks about KU moving on from Saturday's loss to Kentucky by KUsports.com

In other words: "He's 100% when he can defend his men, instead of tailing them all the time." Godspeed, Remy!

That blows...we have seen he is capable. Probably too late for a medical redshirt. I think he has at least another year of eligibility? I say rest him for a couple of weeks at least.

No redshirt and no extra year, unless he applies for a hardship waiver or something & actually gets it (not likely)... He played 4 years at Arizona State and this is his COVID, super-senior year. Bad break all the way around, for both Remy and Kansas. But, as you mentioned, if they rest him fully for a couple of weeks, it's possible that he could still help down the stretch. Trust and rust would be the big concerns then, though.

The Hawks are just not lucky: Remy’s knee, Dave’s foot, and Pettiford’s abdomen. It just ain’t our year.

I think I got a bone bruise on my elbow recently. Fortunately it’s not as critical as a knee and I’m not trying to operate at an elite level of competition. Definitely makes me empathize with Remy. It’s been a couple weeks so mostly unnoticed but there are still definitely ways of moving where it’s definitely limiting.