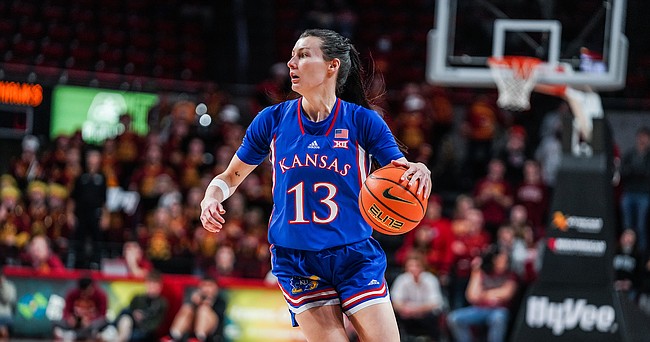 Holly Kersgieter scored 17 points and grabbed 14 rebounds for her first double-double of the season as the Kansas women's basketball team defeated Oklahoma State 68-54 on Saturday afternoon to claim their first win at Gallagher-Iba Arena in Stillwater, Oklahoma, since 2012.

Oklahoma State (6-12, 1-8 Big 12) was led in scoring by junior guard Lauren Fields, who had 13 points, and sophomore forward Taylen Collins, who had 12 points and nine rebounds.

Kersgieter, Kansas' leading scorer and a native of Sand Springs, Oklahoma, an hour's drive east of Stillwater, had reached double figures in scoring in 11 consecutive games before she was held to eight in a loss at Iowa State on Wednesday.

The junior guard scored seven points in the first half against Oklahoma State, helping KU enter halftime with a 28-20 advantage. The Cowgirls made only two of their 15 shots in the first half and were held scoreless for seven minutes in the first quarter, but they were buoyed by Fields, their leading scorer, who made five of her six free throw attempts before halftime.

The Jayhawks ripped the game open with an 8-0 run in the third quarter, then pushed the lead to as many as 19 points. They consistently led by as many as 12 in the fourth quarter even though they were outscored 21-18 by Oklahoma State in the final 10 minutes.

KU shot 7-for-14 (50 percent) from 3-point range on the afternoon and 25-for-55 (45.5 percent) overall. Junior center Taiyanna Jackson scored nine points, all in the first half, and grabbed nine rebounds. Junior guard Zakiyah Franklin also scored nine points, and senior guard Aniya Thomas, who was playing off the bench for the first time since the season opener, finished with six points in 16 minutes.

The Jayhawks were again without sophomore forward Ioanna Chatzileonti, their fourth-leading scorer and second-best rebounder, who was ruled out shortly before the Iowa State game with an illness.

The teams will meet again on Wednesday at Allen Fieldhouse after KU's schedule was shuffled following COVID-19 postponements earlier this month.

Love it! And, still without Chatzileonti. Sets up a string of a few more games that are pretty favorable for the Jayhawks. This is turning into a fun season. Keep on rockin'.