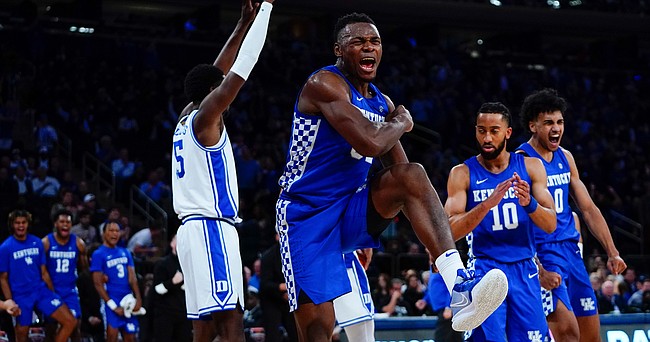 David McCormack knows Oscar Tshiebwe better than any of his Kansas basketball teammates.

That means McCormack is plenty aware of the challenges Kentucky's dominant junior forward can present — and what he must do to stop him.

"We just know he's a dominant rebounder," said McCormack, a senior forward on the Jayhawks. "He's strong. He's physical. We just kind of have to match that or bring more energy, tenacity, to the table."

Finding that energy shouldn't be difficult for McCormack or the fifth-ranked Jayhawks (17-2, 6-1 Big 12), who host the 12th-ranked Wildcats (16-4, 6-2 SEC) at Allen Fieldhouse on Saturday afternoon.

It is the marquee attraction in the annual Big 12/SEC challenge, a meeting between the two most accomplished programs in the history of college basketball. By Friday afternoon, dozens of students hoping to secure the best seats for the matchup were already lining the halls of the storied arena.

The environment, of course, should be electric. McCormack knows that. And after a brief chat between the former AAU teammates earlier in the week, Tshiebwe does, too.

"Just told him Saturday is going to be fun," McCormack said. "We'll definitely be playing at 100 percent, but I'm just looking forward to it, and he just responded with the same type of energy."

Tshiebwe has emerged as one of the best players in the nation this season, a tenacious rebounder who has reached milestones this season that few others have in quite some time.

The 6-foot-9, 255-pound transfer from West Virginia is averaging 15.2 rebounds per game on the season, the most in all of Division I. He's also leading the Wildcats with 16.3 points, 1.6 blocks and 1.6 steals per game.

He had 21 points and 22 rebounds in Kentucky's 82-74 overtime win against Mississippi State on Tuesday, making him the first Wildcats player to reach 20 in both categories since 1975-76.

He has also snagged 20 or more rebounds five times this season, matching Tim Duncan and Blake Griffin for the most by a major-conference player since 1996-97.

Those types of performances have vaulted him into the conversation for the Wooden Award, one that also includes Kansas guard Ochai Agbaji.

For 40 minutes on Saturday, then, two of the best college basketball players in the country will be sharing a court.

"I think those two guys, because of what happened last week, might be leaders in the clubhouse today," said former Virginia Tech coach Seth Greenberg, an analyst on ESPN's "College GameDay" who is on site as part of the network's coverage of the game. "They've just got to keep on doing it. I mean, (Saturday's game is) not going to determine anything, but they're just two really good players."

Agbaji, who is the Big 12's leading scorer with 21.3 points per game, made a layup with nine seconds left to helped Kansas walk away with a 78-75 victory at Kansas State.

He followed that performance with a career-high 37 points in a 94-91 win against Texas Tech on Monday, including a tying 3-pointer with 7.3 seconds left that forced a second overtime.

"What Ochai does throughout the course of the game, and now he has demonstrated that he has become an elite closer, is just significant to our game," said LaPhonso Ellis, another ESPN "College GameDay" analyst, who played 11 seasons in the NBA.

"It's significant to me to see two older guys, in the age of one-and-done, to be the leading candidates ... for the Wooden Award."

Tshiebwe's path to college basketball's highest individual honor was less direct. He committed to West Virginia over Kentucky in October 2018 and played parts of two seasons for the Mountaineers, including three games against Kansas in which he averaged 11.3 points and 10.3 rebounds in 26.3 minutes.

But his affinity for the Wildcats never wavered, and last January, 10 games into his second season, he decided he would transfer to Kentucky.

Kansas coach Bill Self said the way Tshiebwe was used at West Virginia, as part of a tandem of big men alongside Derek Culver, is "totally" different than how Kentucky and coach John Calipari have decided to use him.

"He's playing away from the basket, so it gives him more room to operate," Self said. "I think that he is a much better offensive scorer in large part because he's had space to operate where maybe, at West Virginia, when you play he and Culver together, it's two guys that need to play close to the basket."

What Greenberg has noticed through 20 games is that Tshiebwe has developed skills that weren't apparent at West Virginia. He cited Tshiebwe's ability to guard ball screens, knock down 15-foot jumpers and what he called "really high-level stuff" as proof of his maturation.

He also noted that Tshiebwe's exuberance, as "a guy that comes into practice every day with a smile on his face," has resonated among his new teammates.

And with McCormack, too.

"When you know somebody, it's more competitive, just more fun," McCormack said. "It goes a bit beyond the court."

Kansas basketball coach Bill Self previews the game against Kentucky by KUsports.com

Probably not much hope of some of that double-double rubbing off.

I just read a great autobiography by Oscar Robertson, "The Big O".

Tshiebwe (spelling?) will be the next great Oscar, "The Bigger O".

Big Mac will certainly have his "Scissorhands" Full!