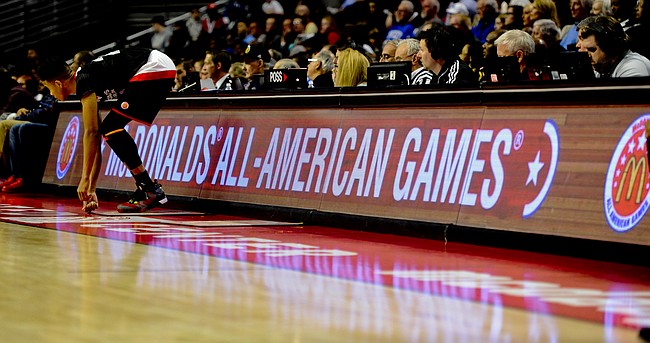 Three future Jayhawks landed spots on the 2022 McDonald’s All-American teams, which were revealed on Tuesday afternoon.

Gradey Dick, MJ Rice and big man Ernest Udeh Jr., all earned spots as “Burger Boys,” the modern nickname given to those who are picked for the famed annual all-star game.

It marks the first time since 2018 (Devon Dotson, Quentin Grimes and David McCormack) that the Jayhawks landed three signees on the McDonald’s teams.

This year’s game, the 45th annual playing of the event, is scheduled for March 29 in Chicago. The first McDonald’s All-American game took place in 1977, and, since then, dozens of some of the biggest stars in basketball made an appearance in the elite prep showcase.

Dick, a standout wing from Sunrise Christian Academy in Wichita, recently climbed into the top 10 (No. 8) of the updated ESPN.com recruiting rankings for the Class of 2022. Through 16 games this season, Dick is averaging 19 points and five rebounds per game for Sunrise. Dick played his first two seasons of high school basketball at Wichita Collegiate before moving to Sunrise Christian Academy.

Rice, from Prolific Prep in Napa, California, and Udeh, an athletic big man from Dr. Phillips in Orlando, Florida, are both consensus 4-star prospects.

That trio joins Zuby Ejiofor as the early signees in KU’s 2022 recruiting class, which was ranked No. 1 in the Big 12 and No. 4 nationally by 247 Sports at the time it was officially announced in late November of 2021.

"Overall, this is an outstanding recruiting class and I don’t think that we are done by any means,” KU coach Bill Self said in November. “We went out to sign five and we got four. I feel great about these four because they are all impact players for us next year.”

Here’s a quick look at the complete team along with reactions from the future Jayhawks after finding out they had been named to this year’s McDonald’s All-American squads.

The 2022 McDonald's All-American game roster was just announced by @malika_andrews on ESPN. The game will be played in Chicago on March 29. pic.twitter.com/0BJqpP0IDn

None by Jonathan Givony

None by Sunrise Basketball

None by KC RUN GMC

God1st! BLESSED BEYOND MEASURES! Kid from Henderson NC with a dream! pic.twitter.com/K6eZVlOsfy

None by Marquise (MJ) Rice

None by Ernest Udeh Jr.

Here's a quick look at all of KU's McDonald's All-Americans:

insane to think DMac was a mcdAA. so take these prognostications w a grain of salt... excited for next year tho! RCJH

How much is McDonalds paying these players in this era of the NIL? Seems to me the exposure would be topped off with cold hard cash to get these players all together.

Nearly all of these made significant contributions to the program. There were some in the latter half of the list that didn't, whether they transferred out (e.g. David Padgett, Quentin Grimes, Bryce Thompson), declared for the draft early (which limited their contributions - e.g. Devon Dotson, Kelly Oubre Jr) or some others who just had problems (multiple reasons e.g. Cliff Alexander, Chieck Diallo). I think the problems with some of the later ones made it difficult for KU to get to Final Fours and possibly championships when some of the best recruits weren't around for the full four years the way they were during the Larry Brown and Roy Williams eras, but it's not Self's fault - BB has changed and players are many more options these days. This year's team, with ten new players, is very impressive for Self to have put together these talented teammates utilizing the Covid extra year, transfer portal, regular recruiting, and graduate transfers.

I'm excited, can't wait for next season. We're rebuilding again. There'll be lots of 3s and dunks. Gradey is a sniper. MJ is, well, he can score whenever he wants. Udeh is going to be a force under the rim. One of our best recruit bunches - in a looong time.

Kansas doesn't rebuild, we reload. Teams that have down years that don't include being a 1-4 seed in the tournament (or miss the tournament entirely like Duke and UK and UNC last year) have rebuild years.

Gotcha! Reload, was what I meant. Thanks for the correction. Glad to hear from you, Shannon!

As a point of reference, JCL would have been a senior eligible for the 2015 McDonals team. In an alternate college basketball universe Cheick Diallo could still be playing for some team.

Tony Guy was 78 and you missed Kerry Boagni 82. It’s interesting to see how many transferred in (signed with a different school originally) like Dreilimg, Calloway, Hancock, Earl etc. and how many left after just one year like Boagni, Davis, Rayford etc. Those are just a few, both lists are long.