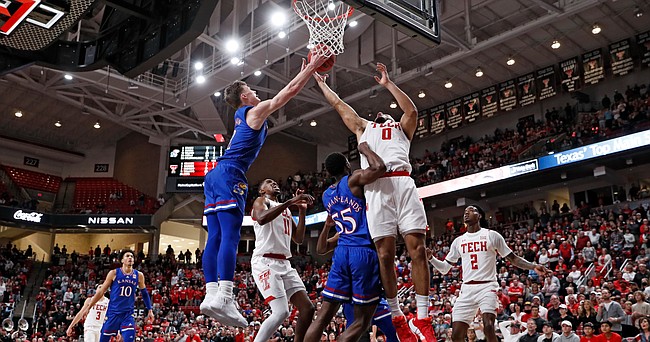 Kansas' Christian Braun (2) and Texas Tech's Kevin Obanor (0) try to rebound the ball during the second half of an NCAA college basketball game on Saturday, Jan. 8, 2022, in Lubbock, Texas. (AP Photo/Brad Tollefson)

The Kansas men’s basketball team will get five days between games this week, with a welcomed gap arriving in the heart of the grind that is the Big 12 Conference schedule.

But first the Jayhawks will have to get through another battle with Texas Tech on Monday night.

The Red Raiders are the first Big 12 program Kansas will see for a second time this season. They’re also one of just two teams to have beaten Kansas so far this season. And, as such, Mark Adams’ club has an opportunity to join a pretty exclusive list that includes just two programs.

In KU coach Bill Self’s 19 seasons in Lawrence, a conference foe has swept the season series from the Jayhawks just twice — Texas a season ago and Oklahoma State in 2017-18.

While KU’s focus in Monday’s game will be on executing in key areas and competing better and harder than they did in a 75-67 loss in Lubbock, Texas on Jan. 8, keeping the Red Raiders from the season sweep is a byproduct of the Jayhawks’ desire to keep their current hot streak rolling.

“We’re looking to bounce back and get a win,” KU junior Christian Braun said following the Jayhawks’ 78-75 win in Manhattan over the weekend. “They’re the only team that’s beat us in the conference so far. They’ve got some guys back so they’ll be a little bit of a different look, with two of their best players coming back.”

That win on Jan. 8 came without Terrence Shannon Jr. and Kevin McCullar in the lineup for Texas Tech. Both average double figures in scoring. And both bring an added dimension of athleticism and experience to the Red Raiders’ lineup.

“I don’t think they are changing how they play,” Self said. “They just have a pro in there (Shannon) in addition to how they played against us. Those two kids are good players. They’re different (with them). It gives them more ball handling and more size.”

In their most recent outing — a 78-65 home win over West Virginia over the weekend — Shannon scored 23 points to push his scoring average to a team-best 12.8 points per game. McCullar added seven points, five rebounds and four assists in the win over the Mountaineers.

While that duo will bring an added offensive punch to Tech’s lineup, the Jayhawks are all aware that any game plan for the Red Raiders starts and ends with figuring out how to solve their defense.

“That game was great preparation for Texas Tech,” Braun said of Saturday’s win at K-State. “I think (KSU and Texas Tech) play similar. They play a little slower. Their defense flies around.”

In looking back on the loss in Lubbock, Self lamented the fact that the Red Raiders completely took away KU’s inside presence — David McCormack scored just four points and grabbed six rebounds — and forced the Jayhawks to win the game from the perimeter.

“And we didn’t do it,” Self said. “Even though we made it close late, they controlled the game in Lubbock and we’ve got to find a way to keep them out of the paint and find a way to get the ball to the paint (on offense).”

“They took David away for the most part and we’ve got to figure a way to have more balance,” Self added. “I’m sure it will be a pretty juiced-up atmosphere.”

Kansas has won four in a row — two at home and two on the road — since losing to Texas Tech. And the Jayhawks (16-2 overall, 6-1 Big 12) will follow up this one by hosting Kentucky at 5 p.m. Saturday in the Big 12/SEC Challenge.

Monday’s tipoff is slated for 8 p.m. on ESPN’s Big Monday, the first of three appearances by Kansas on one of college basketball’s premiere television slots.

Look for Texas Tech to do the “FLOP” at every opportunity. Duke is jealous.

Key points: "we’ve got to find a way to keep them out of the paint and find a way to get the ball to the paint (on offense)." TT got easy baskets all night long and we never adjusted. Us shooting 3s against their layups is not a good recipe for getting a W. We've got to get a good game out of DMac and of course, it always helps to make shots.

By the same token, on offense, we’ve got to find a way to get into the paint!

Matt, "Surging Kansas basketball program..." seems a bit optimistic. How about "Surviving Kansas basketball program...". A one-point win at home against ISU, a strong game against WVU and two one position nail bitters at OU (67-64) and at KSU (78-75). Yes, they are winning but the first half of the KSU game was very concerning given KU allowed 50 points to a previously offensively challenged team. KU's on ball defense is problematic and as Blake indicated TTU ran layup drills the last time the two teams met, and I have not seen great improvement by KU regarding stopping dribble drive penetration. No final score prediction for this game (KU is favored by 6.5 points but the Jayhawks cover less than 50% of the time) but it will likely to be frustrating at times and that Self will be red-faced from yelling. Rock Chalk.

Four wins in a row. Climbing in the polls. Tough wins on the road. Players starting to click into rolls (Wilson and McCormack mostly). It's just a word, so I'm good if you don't like it, but I think this group is surging compared to where it was when they lost at Texas Tech.

Still plenty of room for improvement, too, but these past 4 wins have all been good, tough wins, even if they weren't as pretty as most fans would probably have liked.

Matt, maybe surging in a headline is just a sentative word in the current climate. It went from a good thing to meaning a bad thing the last two years. :)

We are not folding when we play poorly. We are now ranked #5 must be doing something right.

It interests me how we argue over words in sports debates, as if we're trying to decide policy or something. But I guess if we didn't people like Max Kellerman, Stephen A. Smith, and Skip Bayless wouldn't have jobs. So enough lamenting it, and perhaps I'll throw my own $0.02 in.

I understand what Matt is saying in a sense. About things lining up lately. I'm more prone to agree than disagree that with the near misses and the like, it is a more positive than negative sign. It's not as if we're dropping a lot of games or something, and there has been improvement in McCormack and Wilson. All good stuff which could easily be looked over by us spoiled Kansas fans.

I would not call this a surge if we're going to make an issue of the word. To qualify for that I need to see more consistency out of the two players mentioned, Remy settling into a role more comfortably, and more than anything, Kansas being able to dictate the terms of the game as we did a lot in '08. We're not there.

I would use "trending up" rather than "surging", but let's not overlook Matt's points. It's college basketball and you have to factor in that there are going to be close games and the like. It comes with the territory.

We will have to play well in both halves. I would like to see us mix things up, press the ball, throw a zone in for a possession, anything to make TT work for a shot.
Should be great game.

Between these guys and the Chiefs I think half my draws are in the washer and my blood pressure is running 300/185 for hours at a time, not to mention stomach blowouts from acid indigestion.

My game day has swapped to watching from the toilet with a bottle of tums and a case of nitroglycerin mounted on the wall for easy access.

I think that some do not realize that the Big 12 is the best conference in the country. That means it is the most difficult to win in, especially on the road. A win is a win, and more meaningful when you come back from a 17 point deficit on the road against a team that had just won two straight against ranked teams after getting all their players back from COVID protocol. I think our guys are going to be intense tonight.

My keys for tonight. Force TT to take more long jumpers, and block out. If we can get some long rebounds and push the ball up the floor and get somewhere around 15 to 20 points on fastbreaks after their misses, we will more than cover the spread tonight. Limit turnovers. Take care of the ball, catch it with both hands and pass with both hands. If they double down on David, reverse the ball with sharp passes or send someone to the freethrow line where they have options to shoot, drive, or pass. And Remy needs to leverage his quickness and get some steals, some good drives to the bucket for dump offs, lob passes, or layups. And avoid committing charges. We need David's motor to be running tonight on both ends and for him to at least get touches on offense, even if he has to pop it out for a better look from the perimeter. Make the free throws early in the game, and late. Texas Tech does not think they are the underdog. Make them feel that way when zeroes are on the clock at the end of the game.

Maybe, but Kenpom, the NCAA, the AP, and the Coaches poll might disgree with you today on the Best conference.

You have Dick Vitale's vote though! So there's that.