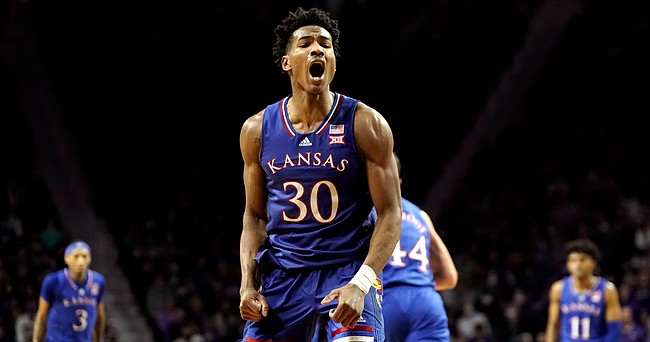 Manhattan — Kansas basketball coach Bill Self tossed one of the strongest compliments he could find toward senior guard Ochai Agbaji following Saturday’s 78-75 victory over Kansas State at Bramlage Coliseum.

He called him complete.

No longer just a role player or a strong 3-point shooter or a reliable defender, Agbaji has emerged — and continues to excel — as the seventh-ranked Jayhawks’ top offensive option in just about every situation imaginable.

“The way that Och has scored of late shows you that he’s a complete guy,” Self said Saturday. “Because he didn’t shoot the ball well today and still scored 29.”

The Big 12’s leading scorer shot 10-of-18 overall but just 2-of-8 from behind the 3-point line. He also uncharacteristically missed four free throws, including three in a row on one trip to the line early in the second half. 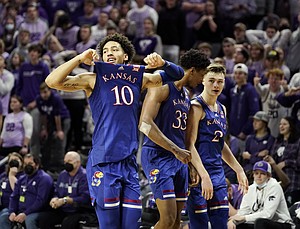 View a gallery of images from Saturday's game between the Kansas Jayhawks and Kansas State Wildcats at Bramlage Coliseum.

None of those misses fazed him, though, and there was Agbaji, yet again, with the game on the line and the ball in his hands.

The last two times that situation presented itself — at home against Iowa State and Tuesday at Oklahoma — Agbaji passed the ball to a teammate for the game-winning shot.

With KU trailing by a point and the clock ticking inside of 30 seconds to play, Agbaji drove hard to the rim and hit a little pull-up from just outside of the paint. That put Kansas up by a point and that was all they needed to snag their third Big 12 road win in four tries so far this season.

Agbaji added a pair of free throws after another KU defensive stop just for good measure.

On the possession before that, with the game hanging in the balance, it was clear that the Jayhawks (16-2, 5-1) wanted to put the ball in Agbaji’s hands.

David McCormack did and Agbaji, after taking a quick first step to get to the baseline, said it was all second-nature scoring from there as he hit the huge shot over the outstretched arms of K-State defender Selton Miguel.

“He was great for us,” Kansas sophomore Jalen Wilson said of Agbaji, who tied his career-high with 29 points, matching what he scored in the season opener against Michigan State. “I don’t know how many points he scored of our last points. He was the hot hand and I had full confidence in him making that shot.” 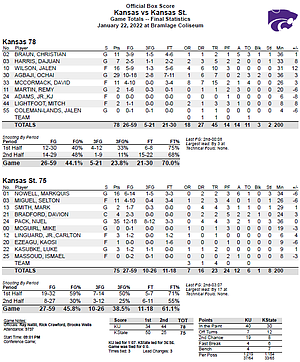 Agbaji said it was the comeback-at-all-costs mindset adopted by the entire team on Saturday that helped keep him more focused on the big picture and less on his own play.

He took the shots that were open. He tried to contribute to stringing together stops. And he stayed ready to attack at all times.

“We kept saying it’s a long game,” Agbaji said after the victory. “Even in the first half, we were like, ‘You know, it’s a long game.’ Things weren’t looking up for us then, but we came to the locker room spirits high, positive, just ready to go out and keep chipping away at their lead in the second half.”

When that lead was finally gone, just seconds after Agbaji’s game-winning bucket and his ensuing rebound of a K-State miss with 0.6 seconds to play, Agbaji showed another key component of his game. Poise.

As the rest of the Jayhawks began to celebrate on the court and near the bench, Agbaji walked with the ball to mid-court and put one hand in the air toward the bench as if to say, “Not yet.” Cool. Calm. Collected. Consistent. Never too high nor too low.

The result of yet another stellar showing by Agbaji made headlines on a national scale. Many college basketball analysts tweeted about his performance, with some saying that it made him a virtual lock for first-team All-American honors later this season. Stadium’s Jeff Goodman wrote that if the season ended today, Agbaji would have as good a case as anyone to be crowned national player of the year.

While those things were surely nice to hear and read for the KU senior, who returned to Kansas for one more year to deliver performances just like this one, teammate Christian Braun said they were not nearly strong enough.

Four nights after calling Agbaji the best player in the country after KU’s win at OU, Braun said it again on Saturday while scoffing at The Sporting News’ recent mention of Agbaji as a second-team mid-season All-American.

“There’s no question the guy’s first team,” Braun said emphatically. “He’s the best player in the country, as you saw tonight. He played defense, played offense, played his heart out. He’s one of the most complete players in college basketball right now. It’s exciting to see him play at that level.”

Ochai is our best offense, the greatest in the team. I agree, Matt. But to [Braun] say that he's a best player in the country, I think that's too immature. Not to nit-pick on Ochai, but he lost his man on D assignment a couple times. He committed silly TOs a couple of times. His FT% does not reflect a great college player, his 3pt% doesn't measure up either. While those are areas for his continued improvement, he still hasn't shown his jumper skill. He'll need that if he wants to go to the league. He needs to be able to create his own shots in various ways. He's still too slow on ball handling, compared to other good college players. And he hasn't really shown his aggressiveness enough through dunking. If he wants to be in top 10, first, get into the SC highlights. Dunks will definitely do.

Steve, There will always be little things to improve on. Even the greatest players have off nights, but they have the ability to will their teams to win. Yes, Ochai had a couple of defensive lapses and he's made some unforced turnovers against KState, but it is absurd to expect that he play perfectly every time out. He's giving a ton of effort and he's rising to the moment when the team needs him.

To say his three point shooting doesn't measure up shows you don't know what you're watching. He's a hair above 45% from 3 for the season while being the offensive focal point and the player opponents are most intent on stopping. Just for reference, that's ranked 3rd in the conference.

Finally, "if he wants to go to the league" just makes me laugh. Right now he's a projected lottery pick. Obviously nothing is guaranteed, but the people paid to analyze the league and the vast pool of draft-worthy talent think he's good enough to go top 14.

Oh please. They said "complete" not perfect. If you take the time to watch any other player this critically, you would and will find defects, missed assignments, etc. Get a grip.

What Doug said!! Ochai is a hoops warrior of the first degree. Rock Chalk!!

The layup at the end was NBA level stuff. He was under control and poised. He used his feet to avoid getting a charge and laid it in the basket. But it was some of the other things he did earlier in the game that really positioned KU for the win, including his clutch free throws, hitting some other shots, a stud OR and put back early in the second half, and his overall presence of mind. Ochai is the kind of guy I want to work side by side with on a daily basis.

Clearly Steve doesn't know what he's talking about, as evidenced by this comment: "his 3pt% doesn't measure up either"... Ochai is shooting 46% from 3, even after his 2-8 performance at K-State! I believe he leads the Big 12 in 3 pointers and 3 pt percentage. And is one of the best in the country. Plus, he's been creating more of his own shoots and shooting off the bounce. "He still hasn't shown his jumper skill" is a laughable and nonsense comment and clearly shows you haven't been paying attention to every game, because his jumper looks PURE and he's hitting at a high clip from all over the floor. Get a grip dude and stop being a naysayer. No one in the country has a better case for POTY.

Keep in mind that POTY usually goes to players that play for a good, nationally ranked team in the national spotlight, in a power 5 conference, with a winning record. He's averaging over 20 pts a game, shooting over 50% as a guard, over 45% from 3, about 5 rebounds a game, a steal a game, is a solid defender, averages only 1.4 TOs per game while playing 34 minutes, and plays for a top 10 team - and a blueblood at that. In the toughest conference in the country. With a top 15 SoS. Please tell me who has a better case for national POTY.

Let's visit this board again, when NBA draft is over. I do hope he'll end up in top 10. But now, not a chance.

What does the NBA have to do with this? The Association is an oddball freakshow. I’m interested in KU and college basketball.

Steve, you still think he isn't POTY after tonight's performance?!? As of now, he's a lottery pick and lock for first team All-American. And the front runner for POTY.

All good here, Jonny. I just wanted the best for Ochai. Great to see him perform like beast tonight!! The sky's the limit. He's that athletic. You saw him jamming the lob. I don't know what I'm talking about - true. His 3s rained down from everywhere. Let's hope he'll carry us all the way this season!!! ROCK CHALK!!!!