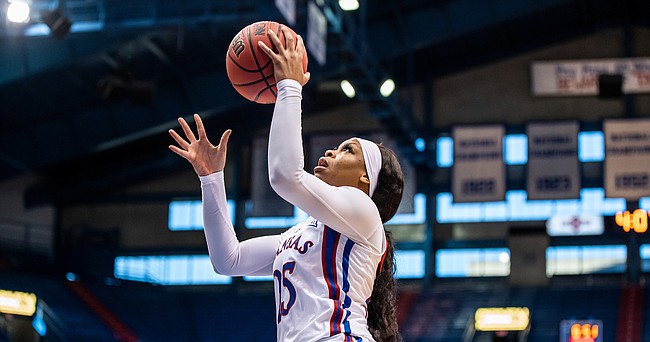 KU's Chandler Prater goes to the rim during a game between the Texas Tech Red Raiders and the Kansas Jayhawks on Saturday, Jan. 22, 2022, at Allen Fieldhouse. (Photo by Aiden Droge/Kansas Athletics)

“This is a really good win for us," coach Brandon Schneider said. "I thought we had a lot of people step up and I was proud of how we closed today."

Prater, a redshirt sophomore from Kansas City, scored 10 of her 18 points in the second quarter. She made seven of her 11 shots, as well as four free throws, to top her previous career high of 14 points, which she scored most recently in the win against Santa Clara on Dec. 12.

"Texas Tech is a good team," Schneider said. "They lost some games in nonconference when Vivian didn’t play, but they have conference wins over K-State and Texas. Any win in this league is a good win and I’m glad we got one tonight.”

Kansas, which broke a two-game slide and a three-game losing streak against Texas Tech, made 19 of its 21 free throw attempts. It scored 27 points off Texas Tech's 18 turnovers and held a 34-20 advantage on points in the paint.

Taiyanna Jackson led the Jayhawks with seven rebounds, and Kersgieter and Chatzileonti each had six.

Nice going, Jayhawks. Back on track with this solid win, and currently tied for 5th on the conference. With so many players capable of making big contributions in any given game, you get the feeling that they're far from their peak capability.