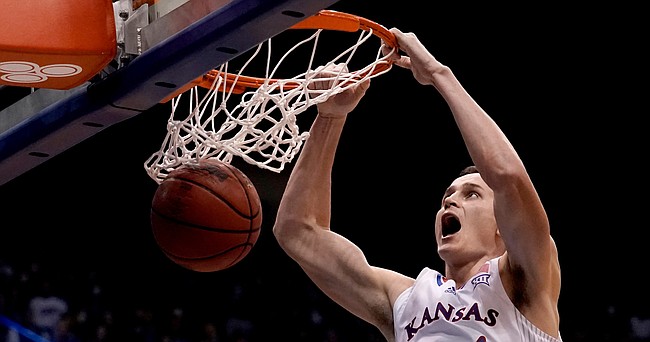 Jalen Wilson didn't know about the Kansas basketball team's success at Kansas State's Bramlage Coliseum until he asked about it on Friday afternoon.

After he was told the Jayhawks are 28-5 in the building since it opened in 1988, the redshirt sophomore forward embraced the history.

"I think the pressure will be on them more than us," Wilson said. "I think we're pretty comfortable there, I guess."

That would be a welcome change for the Jayhawks (15-2, 4-1 Big 12), who have been rather uncomfortable lately. They enter Saturday's game with a three-game winning streak — two of which were down-to-the-wire victories at home against Iowa State and at Oklahoma.

Even in the third, an 85-59 throttling of West Virginia at home a week ago, the Jayhawks only held a two-point lead at halftime.

The first installment of the Sunflower Showdown — the rematch is set for Feb. 22 at Allen Fieldhouse — pits KU against a team in K-State (10-7, 2-4 Big 12) that beat then-No. 19 Texas Tech and No. 23 Texas in consecutive games in the past week.

Those victories, which followed a pair of three-point losses, should give fuel to what could be a raucous atmosphere in Manhattan.

"I hope it's like the K-State we know, when it's jumping there and their fans are getting rowdy," said senior forward Mitch Lightfoot. "I think all of us can appreciate that. Playing in those environments is something that these younger guys need to learn to appreciate because not everybody gets the opportunity to do that. The hostile environments are usually the most fun to play in."

Acclimating those "younger guys" to the rigors of the Big 12 is becoming increasingly paramount for the Jayhawks, who will need contributions from their freshmen to help them through the rest of the season.

Guard Bobby Pettiford played 8:19 in the 62-61 win over Iowa State on Jan. 11, his first game back after an abdominal strain kept him out for nearly a month. Forward K.J. Adams started that game and had three points and two rebounds in a season-high 9:56. And Zach Clemence, who hasn't played since Jan. 8 against Texas Tech because of a foot injury, had been averaging nearly six minutes a game.

Against Oklahoma on Tuesday, Adams played just 3:32 and Pettiford did not leave the bench. Assistant coach Norm Roberts said Friday that Pettiford just needs to get used to playing. His ballhandling skills and ability to go to the post are on par with fellow KU point guards Dajuan Harris Jr. or Remy Martin, but asking Pettiford to play against a team like West Virginia and its usually stifling defense — which he did for nearly three minutes on Jan. 15 — is like "throwing him to the wolves," Roberts said.

Lightfoot, a sixth-year senior, said having experienced players like Ochai Agbaji, David McCormack and even himself in the rotation helps with team chemistry. The Jayhawks entered the season with 10 new players, including a pair of senior transfers in Martin and Jalen Coleman-Lands and the three main contributing freshmen.

"Close games like that can bring teams closer together," Lightfoot said. "Figuring out ways to win those games where you don't play great, you have Ochai getting hurt, you're missing Remy — you find ways to win those close games, that helps teams take a step forward and come closer as a team."

But Lightfoot also believes their collective success shows the younger, more inexperienced players the importance of trusting in their development. Few can be like Duke's Zion Williamson or Kentucky's Karl-Anthony Towns, who took the sport by storm as freshmen, were All-Americans and became No. 1 picks in the NBA Draft. Believing the coaches and grinding is a much more common experience.

KU's Mitch Lightfoot on the atmosphere at Bramlage Coliseum & the Jayhawks' upcoming game at K-State by KUsports.com

KU assistant coach Norm Roberts fills in for Bill Self to preview Saturday's game at K-State by KUsports.com

Agree. Most of our early exits from the ncaa tourney was when we felt comfortable.

What was the team’s comfort level when OU went on a 20-2 run?

Sounds like comfortable is being taken out of context. JWil was responding to finding out our record in their arena. It is more a comment on the past teams than the current team that hasn’t played there yet. His comment definitely beats some trash talking bulletin board material.

As for the current team, Mitch commented well about the older guys passing on to the newbs what road games are about. It is encouraging that they have experienced the border war and responded well. While it hasn’t historically been the case, I think KSTATE/Bramlage might be more intense. I’m trusting that Ochai diving after balls and playing through the resulting injury as well as CBs stare downs will lead the newbs with the appropriate intensity.

this will probably be a tough one, go Jayhawks!

This team cannot take anyone for granted. KU is a 6-point favorite in the little apple and in the last 10 games KU has only covered the spread 5 times. The Over/under is 138, so if KU cannot score in the 70's they will most likely lose. KSU is allowing 61.3 points/game for the season and 64.7 points/game in the Big 12. In their first 3 Big 12 games KSU allowed, 71, 70, and 71, respectively – all losses. In the last three games they allowed 60, 51, 65, respectively – and won 2 out of 3 games (should have won all 3 if not for the meltdown against TCU). KSU will be prepared - hopefully KU will come with energy from the tip. If this game truly gets “muddy up”, and the score is in the low 60’s, it might not go to well for the Jayhawks. Rock Chalk.