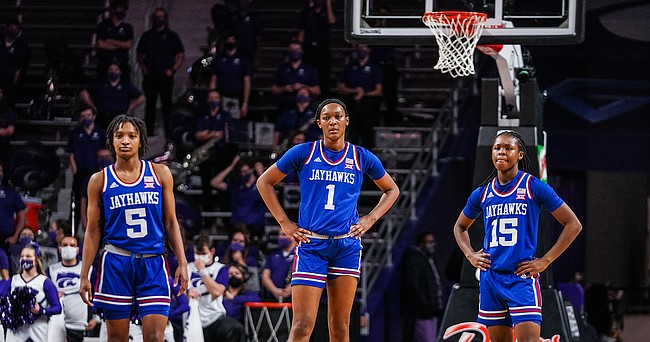 Jayhawks, from left, Aniya Thomas, Taiyanna Jackson and Zakiyah Franklin wait for the action to start back up during KU's road game at Kansas State on Wednesday, Jan. 19, 2022 in Manhattan.

On a night when neither team shot the ball well, a disastrous third quarter spelled doom for the Kansas women’s basketball team in a 69-61 loss to Kansas State in Manhattan.

Trailing just 26-25 at halftime, KU was outscored 19-11 in the third quarter. But it wasn’t just the eight-point deficit that made things difficult for the Jayhawks, who dropped their second game in a row after a two-game road winning streak. It was the fact that the rough quarter led to a hot start to the fourth for the home team, which built a 15-point lead early in the fourth quarter and hung on to win.

The loss dropped KU to 11-4 overall and 2-3 in Big 12 play. It also was the team’s first loss to a non-ranked opponent this season.

After scoring 22 points in the second and third quarters combined, Kansas tried to fight back with a 25-point effort in the final frame. The Jayhawks cut the K-State lead all the way down to four but could get no closer and the Wildcats (14-4, 4-2) salted the game away at the free throw line.

Kansas State center Ayoka Lee led all scorers with 25 points on 10-of-20 shooting and added 15 rebounds, as well.

KU was led by 16 points from Aniya Thomas and 14 from Holly Kersgieter, but those two, along with Zakiyah Franklin, who scored 12, combined to shoot just 14 for 41 on the night.

The Jayhawks finished with a team field goal percentage of 35.6% compared to 38.3% for the Wildcats.

KU center Taiyanna Jackson, who has been a difference maker for the Jayhawks in most games this season, was held in check offensively for the second game in a row. She scored just two points on 1-of-3 shooting in 29 minutes before fouling out.

She made a significant impact on defense, tallying a game-high eight blocks, but that effort was offset by her nine turnovers.

Next up the Jayhawks return home on Saturday to play host to Texas Tech at 4 p.m. at Allen Fieldhouse before heading back out on the road for two more conference contests.

Dang. Not the team's best outing, unfortunately, despite the impressive attempt to save it at the end. Compose yourselves, ladies. There's a lot of season left to play.

Another Yes, the girls can play to Yuk, another disappointing season in 2 games. Rollercoaster

Ku is obviously way better this year than any since the coaching change.