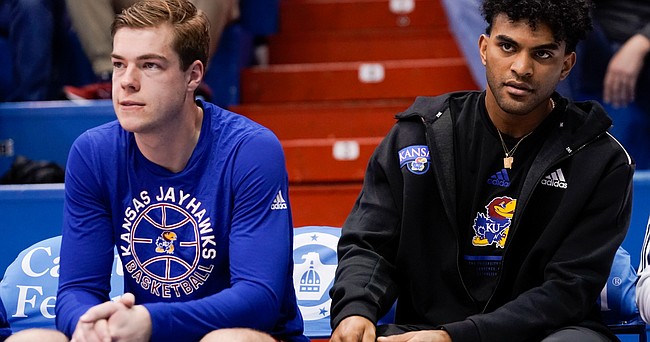 Kansas basketball coach Bill Self said Friday that senior guard Remy Martin remains “day to day or week to week” as he continues to sit out of practice with a sore right knee.

KU was off on Wednesday. Self said Martin did not practice on Thursday. And it was not yet known at the time of Friday’s press conference whether Martin would be able to practice on Friday.

All of it puts Martin’s status for Saturday’s 1 p.m. home game against West Virginia up in the air.

The 6-foot senior transfer who has started 12 of the 13 games he has played in during his first season with the Jayhawks, sat out of Tuesday’s win over Iowa State.

He played 12 minutes in last weekend’s loss at Texas Tech and showed flashes of both being hobbled and being able to impact the game. Particularly on offense.

But he missed the George Mason game prior to that and has now been dealing with the injury for more than two weeks after initially injuring the knee on a drive to the basket in KU’s Dec. 29 win over Nevada.

In the days after the injury occurred, Self said team doctors checked out the knee and saw no structural damage. But soreness, swelling and tightness have left Martin unable to get back to 100%.

On the bench in street clothes during KU’s 62-61 win over Iowa State on Tuesday night, Martin routinely was up off the bench offering instructions and encouragement to his teammates.

In other injury news, Self said freshman forward Zach Clemence did not practice on Thursday and that he did not anticipate Clemence playing against West Virginia.

Self also said that sophomore guard Joseph Yesufu, who did not play against Iowa State, had been dealing with a “turned ankle,” but that he “looked good” in Thursday’s practice.

Freshman guard Bobby Pettiford, who just recently returned to action after nursing an abdominal injury and battling COVID-19, is back practicing full speed. Self said Pettiford was still being watched closely to make sure the injury does not resurface, but he was excited to have him back in the rotation.

“I think he's going to be one of the better guards that we've had,” Self said, repeating a statement he has said throughout the season. “I still feel that way. And, if he hadn’t been hurt, he would already be showing that.”

KU and WVU are slated for a 1 p.m. tipoff on Saturday at Allen Fieldhouse on CBS.

Kansas coach Bill Self on the state of KU's defense and the upcoming matchup with West Virginia by KUsports.com

If ever there was a time for Joseph Yesufu and Bobby Pettiford to step up and win over Self's confidence. The guard play and overall depth looked like an area of strength, especially before the season began when I was talking to coach Self and he said we have "too many guys". Amazing how injuries can change that outlook. Last game it was Dajuan Harris holding down the fort (barely) as the primary ball handler. All Self could say is we really missed Remy after the ISU game. Early in the season it looked like Yesufu and Pettiford would make a great relief team off the bench, and give Harris and Martin a breather. Normally Self is well past experimenting this late into the season but the backup point guard and starting center is truly up in the air. Things won’t get any easier for KU with West Virginia’s hounding defense. Nothing really comes easy in the Big 12. Notice how quickly KU’s offensive production has changed since entering the Big 12 gauntlet (85 points/game nonconference and yes that includes the game against MU versus 68 points/game for the first 3 Big 12 games).