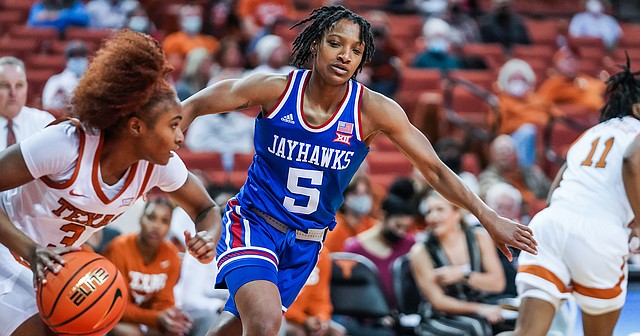 The Kansas women’s basketball program’s upset victory at No. 13 Texas on Wednesday night delivered the Jayhawks their second road win of the week and moved KU to 2-1 in Big 12 Conference play.

To put the week in perspective, Brandon Schneider’s program had recorded two Big 12 road wins total in the previous three seasons combined. Beyond that, the Jayhawks had won just three total conference games away from Allen Fieldhouse in the past six seasons, from 2015-21.

Kansas, which is now 11-2 overall — with its only losses coming to now-No. 5 Tennessee and No. 23 Oklahoma — can match its six-season total of conference road wins when it heads back into enemy territory next Wednesday to take on Kansas State in Manhattan.

If successful there — or whenever this team is able to snag that third Big 12 win away from home — it would mark the first time since the 2014-15 season that the KU women were able to record three conference victories away from home in the same season.

KU went 6-12 in Big 12 play that season, by far the program’s best conference record in the past eight seasons.

Although he has enjoyed the recent success, none of it has come as too much of a surprise to Schneider, who now in his seventh season leading the Jayhawks.

“I think all of us inside the program felt that we had a much different kind of team from a talent perspective,” Schneider told the Journal-World on Thursday. “We felt like we’d filled some holes that we had in our roster (by adding) much improved depth around some really experienced guards.”

Having talent is one thing. But for a program that hasn’t been able to win many conference games of any kind during the past seven years, winning back-to-back Big 12 games on the road was proof that that talent is capable of producing meaningful results.

Schneider listed his team’s maturity and focus as the primary reasons for the successful week.

“In the Texas prep in particular, I just felt like we had a laser focus,” Schneider said.

This, on the heels of a 17-day COVID break that limited the Jayhawks’ preparation to film sessions, hotel walk-throughs and very passive practice sessions.

Asked to identify a common denominator that pulled Kansas through in the recent road wins, Schneider pointed to his team’s ability to stand tall when the opponent captured momentum.

Never was that more evident than at the end of regulation in Wednesday’s win at Texas.

“I think our team in years past would come to an overtime huddle and be dejected that it went to overtime,” Schneider said. “And this team was excited and felt good about the next five minutes, with an opportunity to win the game.”

He said that concept of “staying the course” and “maintaining a positive mindset” has been invaluable for this year’s group.

Now that those traits, which Schneider has been trying to make staples of the program for years, are a given, Schneider is eager to see where they can lead this team.

“Wins are wins,” he said. “But I think that confidence and belief are pretty powerful tools. Our team was confident, our team believed, but you have to have some affirmation. And being able to get two road wins hopefully helps with that.”

Another big opportunity for the Jayhawks to both test and validate their hot start comes this weekend, when Kansas plays host to No. 14 Baylor, a program that has been the gold standard in college basketball and the Big 12 Conference for the past decade.

Tipoff is slated for 2 p.m. Sunday at Allen Fieldhouse. The game will be televised on Big 12 Now via ESPN+.