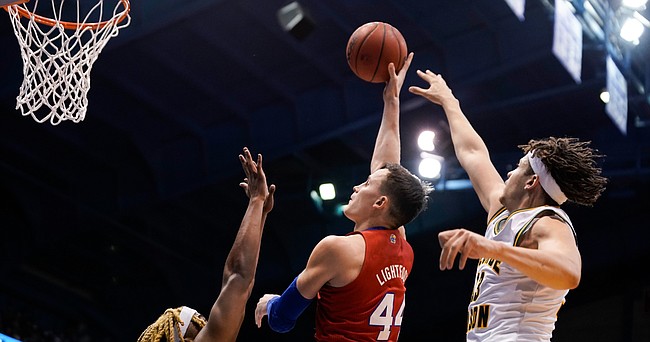 Kansas forward Mitch Lightfoot (44) turns for a shot over George Mason guard Ronald Polite III (1) during the second half on Saturday, Jan. 1, 2022 at Allen Fieldhouse. At right is George Mason forward Josh Oduro (13).

Kansas senior Mitch Lightfoot has been far from perfect but ready when called upon for the sixth-ranked Jayhawks so far this season, making him a key part of KU’s rotation.

Never was that more evident — or important — than on Saturday afternoon during the sixth-ranked Jayhawks’ 76-67 home win over George Mason.

In a little over 21 minutes in relief of the struggling David McCormack, the veteran forward made all seven shots he took and brought a sense of order and efficiency to the Kansas offense.

As a result, Kansas coach Bill Self is contemplating using him a little more in the future.

“We’ve got to play Mitch more,” Self said after Saturday’s win. “It’s time to play him more; there’s no question.”

By more, Self is probably not talking about much more than the 21 minutes Lightfoot played on Saturday. But that was an increase of nine minutes — nearly a quarter of a game — on the 12.3 minutes per game average he carried into Saturday’s contest.

“Mitch, to me, is kind of the energy guy off the bench,” Self said. “But he plays in short spurts. So it looks like he's more energetic. And then when he plays in longer spurts he (doesn’t) look as energetic, to me, but he’s probably more efficient.”

To this point in his career, Lightfoot most often has been used as a change-of-pace option off the bench. But Self’s comments Saturday make it worth wondering if a more important role awaits.

Big enough and always willing to battle on the glass or at the rim, and smart enough and experienced enough to be in the right spots and make the right plays on offense, Lightfoot, this season more than any, has taken advantage of the lessons he has learned in his years of service.

“Being comfortable (helps),” he said. “I’ve been here a little bit and (you get) more comfortable the longer you’re in a system. I was comfortable (on Saturday) and it translated.”

The 6-foot-8 do-everything forward is shooting 62.5% from the floor this season, and, more times than not, he has scored quick baskets in the post shortly after checking in.

Perhaps they stand out because of the ease with which they come and the way KU’s offense operates while he’s out there. Or maybe they’re more noticeable because they often have followed a series of missed shots or struggles at the rim by McCormack in the minutes before he checked in.

Regardless, Lightfoot said he was happy to provide anything the Kansas offense needs, be it jump hooks in the post, dunks while running to the rim, hard screens on the perimeter or good body and ball movement.

“I wouldn’t say I’m hunting shots or anything like that,” he said after Saturday’s win. “I’m just trying to find stuff within the rhythm of the offense. If you take out the post in any offense, it kind of makes it a little more stale. So, I just have to go in there and give them what they need out of that position. (Saturday), it was scoring and I was glad I was able to convert on those jump hooks and stuff like that.”

It’s been since 2018 that Lightfoot had a role this important for the Jayhawks.

That year, as a sophomore on KU’s Final Four-bound team, Lightfoot averaged a career-best 14 minutes per game while playing in 38 contests and starting seven.

An injury to KU big man Udoka Azubuike late in the season landed Lightfoot a starting nod during the postseason, and although his numbers were modest and his minutes stayed low, his steady presence was key.

The following year, Lightfoot averaged 11.7 minutes per game and fell back into the use-as-needed role. And in 2019-20, which was supposed to be his true senior season, Lightfoot elected to redshirt because of KU’s crowded frontcourt. That allowed him to average 10.6 minutes in 30 games, with one start, during the 2020-21 season and the pandemic allowed him to stick around for one more run.

There remains a long way to go before anything concrete can be said about Lightfoot’s contribution to this Kansas team. But his arrow is trending upward and he continues to show that, whether as a skinny, inexperienced sophomore or a savvy, sixth-year senior, Lightfoot’s feel and understanding of the game — not to mention what Self wants from his big men — has made him a key contributor throughout his KU career.

When asked about the Jayhawks’ lack of bench production prior to Saturday’s win over George Mason, Self offered a clear look at how much he values Lightfoot, much in the way he did with Conner Teahan back in 2012.

“I don’t even look at Mitch and Jalen (Wilson) as bench guys,” he said.

Kansas basketball coach Bill Self on his bench, a KU COVID case & fans showing up vs George Mason by KUsports.com

Mitch Lightfoot after his 7-of-7 shooting night vs. George Mason by KUsports.com

KU’s Jalen Coleman-Lands meets with the media after 20-point outburst vs. George Mason by KUsports.com

How about if D mac's first two bunny shots are missed, he's pulled the rest of the way. It appears to me you can tell from looking at him play over his career at KU that if he starts off bad, he generally stays bad. If he starts off good, he probably will be ok in his subsequent minutes on the floor.

IMO, the risks are too great now that we have moved to league play to leave him in more if he starts off doing poorly.

How about if Mitch is given D-Mac's starting job for the rest of the season. D-Mac doesn't deserve to start anymore.

If Mitch is starting at the five-spot, I see Kansas finishing in the middle of the conference. Mitch provides ZERO defense.

Defense is KU’s weakness. And it is a big, big weakness.

Really? Mitch provides zero defense? I think he is a better rim defender than Dmac.

Agreed Benjamin. Mitch isn't a big body or 7footr, but before Dok's senior year, Mitch had a better block percentage. He's smart enough on D, as well as O, to be efficient and effective.

Mid-conference seems extreme, but starting Mitch does definitely limit our potential. Mac is a high risk/reward player. It was less than a year ago that he clearly demonstrated his potential, though he definitely hasn't been playing to that level. Coach has shown in the past that he plays potential.

The beauty of Mitch is that there aren't any head space concerns. You'll get the same efficient performance whether he is starting or coming off the bench, and mores than any other player on the team. Does Coach use giving a start to him as motivation for others? Sure, but it's not likely the long term solution for optimizing the teams performance.

I have to disagree. IMHO, Mitch plays very good D. He knows the switching pattern, helps out and is a threat to block shots even when it is not his man. He goes after and gets many of the 50/50 balls and takes the charge when it is there.

Mitch plays much better defense than McCormack. He blocks more shots and gets more rebounds. Mac is really struggling this season, and shouldn't be as a senior. Something is just totally wrong with his game, don't know if it's his mind set or if it's because he is just not that good.

This is Coach Self’s worst defensive team - ever. It starts with the perimeter. He doesn’t recruit guards and wings who can play defense.

He used to. What happened?

Garrett was probably the one player that has ever come in knowing how to play D. Coach teaches them all. The same quickness that allows a player to attack on O, also allows them to defend once they learn how. There currently are possibilities, though they're learning slowly.

Coach made the comment in a recent presser that this team is averaging something like 4 live ball TO's leading to layups (not sure anyone else tracks those kinds of stats), and maybe on both sides of the ball. Those kind of plays can really skew the big picture stats we commonly see, leading to worse D ratings (though really a function of the O) and better O ratings (though really a function of the D).

There's been improvement as the new guys learn, but it's definitely not finished.

Maybe DMac can be the energy guy off the bench, the guy who gives the team a different look/pace? It could work. Also, I thought Mitch was taller than 6'8".

DMac and Mitch have played themselves into this change. Saw a great post on twitter yesterday showing how DMac has regressed from the second half of last year.

If Mitch can stay out of foul trouble we are going to be a stronger team.