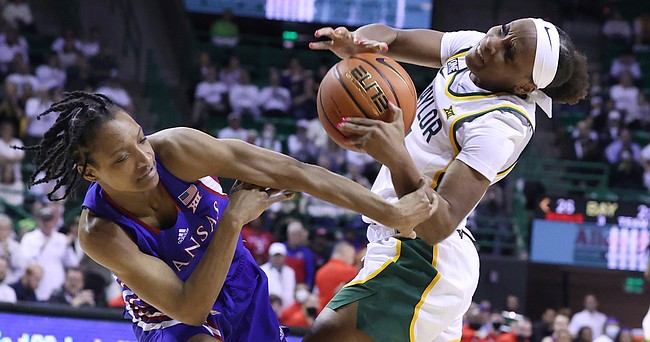 The Kansas women's basketball team challenged No. 5 Baylor late in the fourth quarter but lost another close game when it fell 85-77 on Saturday in Waco, Texas.

Sophomore forward Ioanna Chatzileonti scored a career-high 21 points and junior guard Zakiyah Franklin scored 17 for the Jayhawks (19-7, 10-6 Big 12), who trailed by three with 2:49 remaining when Franklin made a layup, drew a foul and sank the resulting free throw but could not get any closer.

Kansas fell 82-79 to Baylor in the teams' first meeting on Jan. 16 at Allen Fieldhouse. 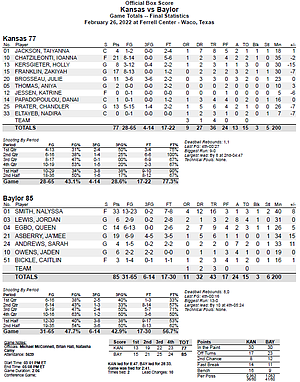 A victory on Saturday would have cemented the Jayhawks' first appearance in the NCAA Tournament in nine years. Instead, the defeat, combined with No. 9 Iowa State's 71-55 home win against Texas Tech earlier in the afternoon, ended their unlikely chances of winning the Big 12 regular-season title.

Saturday's game was as tightly contested as the one between the teams six weeks earlier.

There were 10 lead changes, including eight in the first half. The Jayhawks took the lead for the final time at 45-43 when Franklin made a jumper with 5:47 left in the third quarter, and her free throw near the end of the game made it 75-72 and capped a 9-2 run that nearly erased a 10-point lead.

"To beat a team that's that good, you've got to really be clicking and put it together," coach Brandon Schneider told reporters. "And I thought we were we were good, but we weren't good enough. Just have to find a night where we can put it all together."

The teams played a sloppy first quarter in which they combined for 13 turnovers, with Kansas committing five in the first 2:42. Senior guard Julie Brosseau made a pair of 3-pointers, the second of which gave the Jayhawks an 11-9 lead, but Baylor guard Ja'Mee Asberry made one of her own with 21.8 seconds left in the quarter as the Bears claimed a 15-13 advantage.

Kansas hung tough, then embarked upon a 9-0 run behind Chatzileonti and redshirt sophomore guard Chandler Prater that spanned two minutes and gave it a 28-20 lead with 4:47 remaining before halftime.

But the Jayhawks went cold and missed their next five shots, and although the Bears made just eight of 14 free throws in the quarter, their transition offense allowed them to outscore Kansas 16-4 over the final 4:47 to take a 36-32 lead into the break.

KU chipped away at that lead and briefly went up on Franklin's jumper, but Asberry responded with a pull-up 3 pointer in transition, then made a layup, drew a foul and sank the free throw on the next possession for six points in 28 seconds. Baylor reclaimed the advantage with a 13-2 run over the next three minutes.

Kansas, which trailed 61-54 entering the fourth quarter, was able to draw within five points on a jumper by junior guard Holly Kersgieter less than 30 seconds in. Baylor pushed that lead back to double figures within 30 seconds, and after the Jayhawks' late run that ended in Franklin's free throw, Baylor senior center Queen Egbo made a pair of layups that were too much for them to overcome.

Smith, a national player of the year candidate who entered the game averaging a double-double on the season, scored 12 points in the fourth quarter alone.

Prater finished with 13 points and six rebounds off the bench and Brosseau had 11 points for the Jayhawks, who shot 43.1 percent. Despite Smith's performance, they still matched the Bears' 30 points in the paint.

KU will play its final regular-season home game Wednesday when they face No. 11 Texas at 7 p.m. on Wednesday at Allen Fieldhouse. The Jayhawks defeated the Longhorns 70-66 on the road in overtime in the first game on Jan. 12.

Maybe the team doesn't need a confidence boost, but if they do, the two closely contested losses to Baylor should provide it. Keep those heads up, ladies. There's still a lot of playing to be done.

As nice as a W would have been, next week are the really important games against the defectors for third place.

And Monday is the showdown for the championship.

I haven't been following Lady Jayhawks closely this season, but was able to pull some highlights on youtube. Maaan.. I like what I'm seeing. They got moves! Nice passes, slashing to the basket, crossovers, 3pt shootings. Fearless. Kudos to coach BS & staff for their development and potential to make this season the best KUWBB record in a decade! It's about time!!