Game Day Breakdown: No. 5 Kansas basketball at No. 10 Baylor 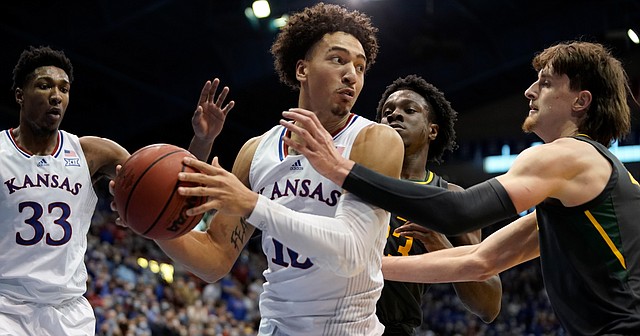 Kansas forward Jalen Wilson (10) looks to dish to the wing against Baylor during the second half on Saturday, Feb. 5, 2022 at Allen Fieldhouse.

This weekend’s clash between teams at the top of the Big 12 standings figures to go a long way toward determining the 2022 Big 12 champion.

“The earlier the better,” said super-senior Jalen Coleman-Lands when asked how much the league race factors into the Jayhawks’ preparation for this one. “Especially with it being in our control. We are playing each game, especially this one, like we are trying to win a championship. That’s the mindset.”

A Kansas win would move the Jayhawks within a game of guaranteeing at least a share of the 2022 title and knock the Bears from contention. A Kansas win couple with a Texas Tech loss to TCU earlier in the day

A Baylor win would close the gap at the top to just one game in the loss column and keep both BU and Texas Tech alive in the hunt for the league crown.

Those facts have brought an added level of focus and motivation for the Jayhawks, who are looking to reclaim the Big 12 crown after watching Baylor win it a season ago on their way to winning a national title.

Add to that the fact that Kansas expects Baylor to be stewing over an 83-59 loss in Lawrence, and extra fired up because of the presence of ESPN’s College GameDay on campus, and KU knows it will have to be on top of its game to leave Waco with a victory.

“We expect them to play different than what they did last time, to come out with more fire,” KU senior Ochai Agbaji said Thursday when looking ahead to the matchup. “They are at home. It will be a rough road game and rough environment for us. But I think it’s going to be fun. It’s a really great opponent. I’m ready for this test. It’s the test we’ve all been working for the whole entire season. I’m excited.”

Added Kansas coach Bill Self of this type of game at this point in the season: “I know they will enjoy it. I certainly hope we enjoy it. It’s kind of a reward for both teams doing well, them hosting GameDay late in the conference season for a game that has (title) implications. We’ll be excited about it. They’ve got really good guys. We’ve got really good players. It should be a fun game.”

The Jayhawks dominated the Bears 48-26 in points in the paint in the first meeting, and that was with starting big man David McCormack shooting 1-for-6 on the day.

The Kansas offense was so aggressive throughout the game — both in transition and in half-court sets — that it allowed the Jayahwks to get easy buckets at the rim all afternoon while Baylor looked powerless to stop it.

KU’s defense fueled the Jayhawks’ transition game and the home team’s fire, just one week removed from an embarrassing home loss to Kentucky, proved to be too much for the Bears to handle.

Agbaji said rebounding would be one of the biggest keys in the rematch simply because the Jayhawks want to keep Baylor to as many one-and-done possessions as possible.

In the first meeting in Lawrence, BU shot just 26% from the floor and was limited to 13 second-chance points on 50 misses.

The Jayhawks also out-rebounded the Bears, 46-37, getting nearly as many defensive boards (35) as BU did total boards.

“I think that goes for a lot of opponents we play in the Big 12,” Agbaji said. “But rebounding is the key to how we run our offense and how we play.”

Cleaning up the defensive glass leads to immediate opportunities in transition for the Jayhawks, who have shown throughout Big 12 play that they play better the faster they go. But the numbers against this particular Baylor team also show how critical the battle on the boards will be.

McCormack’s individual offensive rebounding percentage of 19.9% ranks second nationally and is tops in the Big 12 Conference.

3. All eyes on Akinjo

You don’t have to listen long to hear how impressed Self is with Baylor point guard James Akinjo.

“He’s a stud,” Self said of Akinjo before the first meeting between these teams this season. Self then followed up that assessment with a word that he often used to describe former Jayhawk Frank Mason III.

The first-year BU transfer has everything a coach could want in lead guard. Speed, strength, shot-making skills, play-making ability, toughness, pride and more. Because of that, slowing him down is not about one defender taking up the challenge. Dajuan Harris Jr. did a lot of the work on him the first time, but the Jayhawks know they can’t expect Harris to take the assignment on a full-time basis because of ball-screen actions, mismatches, transition and more.

“Guarding guys like that, it’s going to take a team effort,” Coleman-Lands said. “We know he can shoot. We know he can score and create. (It’s important) to just keep all eyes on him throughout the game, knowing where he’s at when he doesn’t have the ball. Even if he’s not making shots, how do we continue keeping him out of his groove. Things like that you have to be mindful of.”

Coleman-Lands called Akinjo “the head of the snake” and said that KU’s goal this time around is the same as it was the last time.

“Trying to cut that off,” he said.

It worked in the first time, as Akinjo was scoreless while shooting 0-for-11 overall and 0-for-5 from 3-point range at Allen Fieldhouse.

No one on the Kansas side is expecting those numbers again, though.

“He’s not going to do that very often, if ever again,” Self said after the first meeting. “But he had to take hard shots. (We) made him work.”

Self reiterated that stance this week, when asked about facing Akinjo a second time.

“When you play guards like that, that are that good, a lot of times it becomes a make-or-miss game,” he said. “Because he could make all the same shots Saturday that he missed the other day.”

KU’s defense vs. the unknown

Just like last time the Bears faced Kansas, injuries figure to play a role in how this matchup looks on Saturday.

Reports from Waco on Friday indicated that junior guard Adam Flagler was cleared to play and that sophomore guard LJ Cryer would be a gametime decision. That exact scenario hit the Bears in Lawrence, and it led to Flagler playing and Cryer sitting out.

Self said then that taking Cryer — a 46.8% 3-point shooter — out of the Bears’ lineup changed the way Baylor played and made the BU offense easier to guard. It remains to be seen if the Jayhawks are as fortunate this time around, but the fact that Flagler will be out there is significant.

Not only did he lead the Bears in scoring the first time they faced Kansas — 16 points on 6-of-15 shooting, including three 3-pointers — but he also is coming off of a 29-point effort in an overtime win at Oklahoma State, where he made seven 3-pointers.

“The show Flagler put on in Stillwater was about as impressive as anybody’s done all year long, including our guy (Agbaji),” Self said Thursday.

Also missing from the BU lineup this time around will be forward Jonathan Tchamwa Tchatchoua, who suffered a season-ending knee injury a couple of weeks ago.

The Bears have shown they have enough depth and talent to overcome those injuries on most nights. But doing it against Kansas, which has dealt with its own set of injury problems, could be a tougher ask if the Jayhawks are anything like they were in the first meeting.

That “if,” along with the availability and effectiveness of some of Baylor’s top weapons, has created somewhat of an unknown for Kansas, who no doubt will want to pay close attention to the scouting report but also may be best served in locking in on itself in this one.

Coleman-Lands said this week that the one thing that stood out above all else about KU’s success in the first meeting was how well the Jayhawks played together on both ends of the floor.

“I felt like we were cohesive,” he said. “Defensively, offensively, we were just kind of on the same (page). We can beat anybody if we’re playing like that.”

The last time the Jayhawks played Baylor, three weeks ago, they had the advantage of both being at home and being supremely miffed about their most recent high-profile home game, a rout at the hands of Kentucky just one week earlier.

All of the anger and embarrassment that emerged from the blowout loss to the Wildcats was bottled up and taken out on the Bears, who were never in the game and trailed by as many as 34 before the final score settled in at 83-59 in KU’s favor.

This one will be the eighth top-10 matchup in Ferrell Center history. The Bears are 3-4 all-time in top-10 showdowns at home but 2-0 in their last two.

By all accounts, these two teams are evenly matched. Baylor is ranked 4th in the current KenPom rankings and Kansas is fifth. In last weekend’s NCAA Tournament bracket preview, the Jayhawks were the No. 4 overall seed (the fourth No. 1 seed) and the Bears were the No. 5 overall seed (the top No. 2 seed). KU is fifth in the NET rankings, one spot ahead of Baylor at No. 6. And the two programs are tied for the most Quad 1 wins in NCAA Division I this season with 10.

“I think it’ll be highly competitive, fun game,” Self said. “You work a long time to play in games like this.”

Kansas leads the all-time series with Baylor, 35-7, including a 14-4 edge in games played in Waco.

KenPom lists this one as a four-point advantage for the home team, with Baylor holding a 63% win probability.