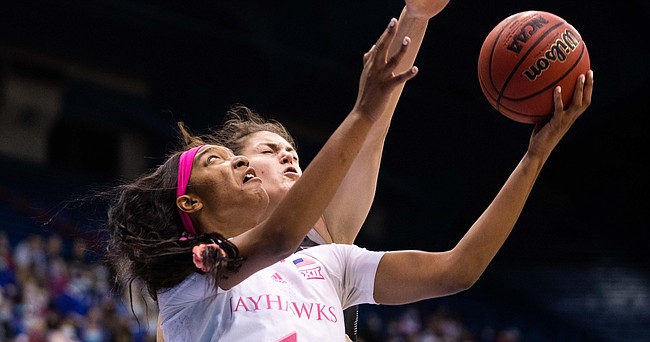 Kansas women's basketball center Taiyanna Jackson tries to shoot during the game against Iowa State at Allen Fieldhouse on Feb. 23, 2022.

All good things must come to an end.

The Kansas women's basketball team's seven-game winning streak was snapped on Wednesday by No. 9 Iowa State, which held a consistent double-digit lead and won 85-59 at Allen Fieldhouse.

Chandler Prater had 17 points off the bench and Holly Kersgieter had 14 points for Kansas, which has now lost its last 15 games against Iowa State dating to the end of the 2014-15 season.

They entered the game ranked second in the nation with 10.6 made 3-pointers per game and third with a 38.3 3-point percentage.

"I thought Iowa State was terrific," coach Brandon Schneider said. "I didn't think we were our best. We got our butt kicked, and that happens."

Whereas Iowa State made 17 attempts from beyond the arc, Kansas went just 17-for-47 from 2-point range. It struggled to finish at the rim, especially in the second quarter, and though it was able to shut down the perimeter shooting in spurts, it wasn't enough.

Iowa State claimed a 17-point lead late in the first quarter because of its 3-point shooting, as it went 7-for-11 from beyond the arc in the opening 10 minutes. Joens, in fact, made her first four 3-point attempts, all within the first four and a half minutes, and Kansas didn't make a field goal over the final 6:50 until Kersgieter knocked down a jumper as the buzzer sounded.

Kersgieter's basket, and a pair of hustle plays by Taiyanna Jackson — a block on Beatrice Jordao and a dive for a loose ball that led to a held ball — drew the crowd back into it in the opening minutes of the second quarter.

But the Jayhawks made just one of 10 shots in a nearly six-minute span, and though Iowa State only went 4-for-15 in the period, it held a 38-26 halftime lead.

It didn't take long after halftime for that advantage to blossom. Iowa State embarked upon a 10-2 run over the first three and a half minutes and forced Kansas to call a timeout after Joens knocked down a 3 in transition for a 48-28 lead.

Kersgieter made the Jayhawks' first 3-pointer with 2:35 left in the quarter — they had been 0-for-8 — and she and Chandler Prater each scored six points in the period, but Iowa State pushed the lead to 22 points at 62-40 when Jordao made a left-handed hook shot while unguarded underneath the basket.

Kansas trailed 62-42 entering the fourth quarter, and although it was able to surge early behind a pair of 3-pointers from Prater that trimmed the deficit to 11 at 64-53, Iowa State responded with two of its own. Its lead peaked at 28 points in the closing minutes.

"We played great today," said Iowa State coach Bill Fennelly. "The score is not indicative of how good they are at all."

Ioanna Chatzileonti had 11 points and nine rebounds for the Jayhawks, who shot 31.7% and were outrebounded 44-37.

KU's seven-game winning streak, which has carried it to the cusp of its first NCAA Tournament selection in nine years, was its longest in conference play since it won seven games to close the 1996-97 regular season. It was seeking to win an eighth consecutive conference game for the first time since the NCAA began sponsoring women's basketball in 1981-82.

The Jayhawks will be in action again Saturday at No. 5 Baylor at 2 p.m. They lost 82-79 in the first meeting on Jan. 16 after leading by four points with less than 14 seconds remaining.

"We played great today," said Iowa State coach Bill Fennelly. "The score is not indicative of how good they are at all."

True, but it might not be entirely unrelated to a difference in the focus of the two teams, at least at the outset. Whatever the explanation, regroup (immediately) and put this one in the rear view mirror.

It’s a brutal 4 game stretch. That’s not a good start but also only one L. Gotta regroup and get ready for bu. All the goals are still there.

Setback, but great to see the ladies achieving what they have this year. Keep going!!!

I think that people have been too focused on why we weren't ranked lately. This game goes to show you why. We are light years better than we've been without question, but we've beaten the teams we should have and now we have to prove we can compete with the top 1/3 of the league. Not a good start to proving that, but I don't think this game is indicative of where this team is at either. Hopefully these next 3 will be competitive to the end and give them some momentum.