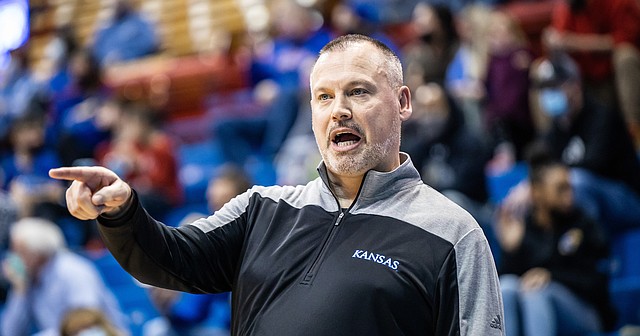 It's already a matter of "win and you're in" for the Kansas women's basketball team.

The toughest season-ending four-game stretch of any team in the country is set to begin for the Jayhawks, who have likely secured their first appearance in the NCAA Tournament in nine years.

One victory in their final four regular-season games would cement it. Kansas (19-5, 10-4 Big 12) will face No. 9 Iowa State at Allen Fieldhouse on Wednesday, followed by a game at No. 5 Baylor on Saturday, a home game against No. 11 Texas on March 2 and a road game against No. 20 Oklahoma on March 5.

But losing four consecutive games to finish the regular season, and potentially a loss against one of those teams again in their first Big 12 tournament game, could give the NCAA Tournament selection committee reason to look elsewhere when the 68-team field is populated on March 13.

"We might have the toughest four-game stretch of anybody in the country, but I think our players see it as opportunity," said coach Brandon Schneider. "We see it as an opportunity to continue to improve our NET rating and, eventually, NCAA Tournament seed, and we're in control of our own destiny when it comes to conference championship race."

Kansas, which fell five votes shy of being ranked in the Associated Press poll for the first time since Jan. 14, 2013, is on a seven-game winning streak — its longest against conference opponents since the end of the 1996-97 regular season. Its NET ranking, used as a guideline for NCAA Tournament selection, has been in the low 30s for weeks.

They lost 77-62 on the road on Jan. 26 and have not beaten the Cyclones in Schneider's seven seasons as coach. Iowa State ranks second in the nation with 10.6 3-pointers made per game behind sharpshooting guards Ashley Joens and Lexi Donarski.

"They will shoot a lot of 3s and make them, and a lot of free throws, too," said sixth-year senior guard Julie Brosseau. "That's what we learned. We've got to be better at defending the 3-point line next game and just be locked in more on the scouting report."

Brosseau, who is from outside Montreal, the only player on the Jayhawks who has appeared in the NCAA Tournament. She played at Maine when it won the America East in 2017-18, was a No. 15 seed and lost at No. 2 seed Texas, 83-54, in the opening round.

"Since I went, that has been my goal — to come back and not only to go there, but to win and go further in the tournament," Brosseau said. "But yeah, it's crazy, especially for my last year. I couldn't ask better for that."

The challenge for Kansas, then, lies before it. The only other team to finish its season with games against four consecutive ranked teams is No. 13 Maryland, which has just No. 10 Indiana remaining on Saturday after a loss at No. 9 Michigan on Sunday.

ESPN's Charlie Creme, who projects the NCAA Tournament field as part of his recurring "Bracketology" feature, had Kansas as a No. 9 seed during his latest update Tuesday morning.

He said the Jayhawks can still make the tournament if they lose out because, entering the conference tournaments, there are few teams perceived to be behind them that are making a run.

"If a team like Kansas falls out, someone's got to move in," Crème said. "Well, even with five straight losses by Kansas, what teams are doing enough or have a good-enough resume to move ahead of them? So it's kind of that whole, well, 'If one thing goes up, another must come down,' and vice-versa."

What also works in the Jayhawks' favor is that the women's basketball tournament has expanded to 68 teams this season, up from the 64 teams that had been invited since 1985. Even though the midweek First Four games haven't always had the same pageantry as the rest of the tournament on the men's side, it's still technically an NCAA Tournament appearance.

And Creme believes Kansas would need to fall at least 10 spots for it to end up in those four games.

"That said, these next four games are obviously against elite teams and they're huge," Creme said. "Honestly, I think one win in these four would ensure they're in. Four blowout losses and then not doing what's expected in the Big 12 tournament could spell some trouble. I don't think they're completely clear yet, but I have a lot of confidence."

So, too, does Schneider. He has said for weeks that he believes 10 conference wins would get Kansas into the NCAA Tournament, and it hit that mark with a 71-68 win at Texas Tech on Saturday.

He knows, however, there's still work to be done.

"We don't need any help from anybody," Schneider said. "We play all the guys that are in the game, and I think we just feel really good about being in the game with two weeks to play."