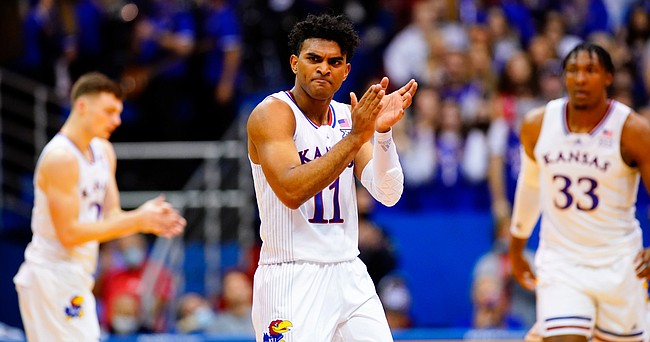 Kansas guard Remy Martin (11) applauds a Jayhawk bucket during the second half on Friday, Nov. 12, 2021 at Allen Fieldhouse.

Kansas basketball coach Bill Self said Thursday, at his weekly news conference at Allen Fieldhouse, that injured guard Remy Martin told him this week that he was “definitely feeling better.”

Still battling a bone bruise in his right knee, Martin has missed the last five games after being limited in the handful of games before that.

The Arizona State transfer has not played since KU’s home loss to Kentucky, and his return to the court remains up in the air.

Self said earlier this week that there was no timeline for Martin rejoining the team, and he stuck with that stance during Thursday’s meeting with the media.

“(With) Remy, I really don’t know more other than the fact that, as of yesterday, he told me that he was definitely feeling better and he’s doing more on the court, one-on-zero, and maybe could get into some type of practices sometime soon,” Self said.

Most of Martin’s time during recent weeks has been spent in rehab. He has been on the bench in street clothes for all five games in which he did not play.

While Thursday’s update seems to suggest that Martin may be getting closer to suiting up again, Self said the timeline remained unknown.

“I still don’t see an immediate return for him, based on Thursday, (February) 17th,” Self added.

Sixth-ranked Kansas, which leads the Big 12 by two games in the loss column over Baylor and Texas Tech, plays at West Virginia at 7 p.m. Saturday and again Tuesday at home against Kansas State.

The Jayhawks have six regular season games remaining before the Big 12 tournament arrives, and Self has said in recent updates about Martin’s status that the injured guard would likely need to return to action with a few games remaining in the regular season in order to have time to shake off the rust and adjust to rejoining the team.

Basketball Friends | Rotation Getting Tight as KU Heads Into the Homestretch by KUsports.com

Kansas coach Bill Self on where the Jayhawks sit entering the homestretch & Saturday's game at WVU by KUsports.com

Jalen Wilson takes a look at KU's earlier win over West Virginia & what that means for the rematch by KUsports.com

Kansas freshman Zach Clemence on his emergence and the importance of KU's bench moving forward by KUsports.com

we won't be our best until he's back.

At this point in the season, Remy may opt out and prepare for the NBA draft.

While that "could" happen, Remy is such a long shot to play in the NBA that I doubt he is thinking beyond college right now. The road for him to play pro ball beyond college will be a difficult one so I am not sure he is thinking along those lines. He looks like a guy who is both frustrated and focused on getting back on the court to enjoy his last shot at the college experience.

Martin has been such a disappointment from the start. He was named preseason Big 12 Player of the Year, but has been to Big 12 Dud of the year, never showing that he was very good.

One could blame that on injuries, but he wasn't that good when he was healthy. Now is the time for him to start showing what was promised.

Ken, I’m not ready to declare him B12 “dud of the year”, but he’s definitely underwhelmed… That being said… what does that say about the so-called, experts? I could have told you, that RM wasn’t going to get anywhere near his ASU numbers/production, because KU b-ball wasn’t conducive to that style of play. And I’m not a b-ball savant, I just have the ability to believe what I see. Yet, the experts, had him 1st Team Big12.