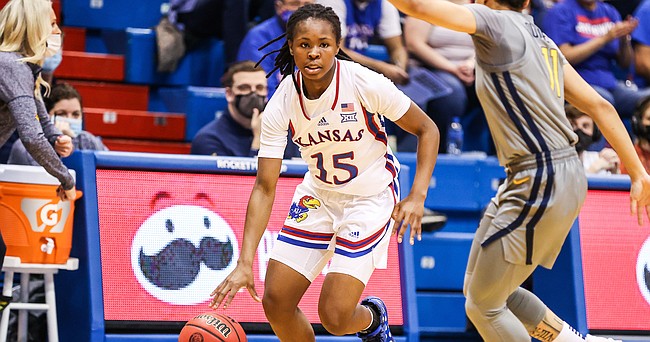 Kansas guard Zakiyah Franklin puts the ball down and drives to the basket during the Jayhawks' home game against West Virginia on Tuesday, Feb. 15, 2022 at Allen Fieldhouse.

The Kansas women's basketball team may be headed in a new direction, but it was two of its most veteran players who took over on Tuesday night.

Junior Zakiyah Franklin scored a season-high 25 points, one shy of her career high, and senior Aniya Thomas had 12 points off the bench as Kansas extended its Big 12 winning streak to six games with a 74-63 victory over visiting West Virginia at Allen Fieldhouse.

"They're not getting caught up in win streaks or the first this or the first that," said coach Brandon Schneider, who is seeking a first NCAA Tournament appearance in his seven seasons. "They know that in order to keep playing well, we have to keep preparing the right way." 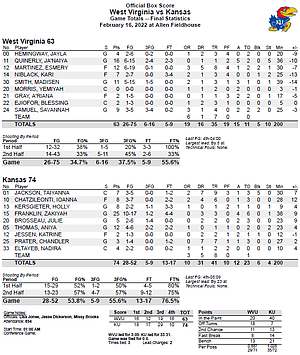 Kansas won despite the absence of leading scorer Holly Kersgieter, who was honored prior to the game for scoring her 1,000th point against Kansas State on Saturday.

The junior guard picked up her second foul 1:58 into the first quarter, sat for much of the first half and scored eight points in the first five minutes of the third quarter.

But she became lightheaded with Franklin about to shoot free throws with 5:09 left in the third quarter and fell in front of the Jayhawks' bench. She did not lose consciousness and was helped to her feet and evaluated by Dr. Luis Salazar.

"I think initial feedback is just dehydrated, so they got her back and got her fluids," said Schneider, who slowed Kersgieter's fall. "I could just tell that she wasn't right and just looking in her eyes when she came off, and she just crumpled."

The Jayhawks attacked the rim often, even against West Virginia's taller frontcourt, and finished with a 40-20 advantage on points in the paint and an 41-35 edge in rebounding.

Franklin scored 10 points in the first quarter to spur the Jayhawks to an 18-16 lead after 10 minutes.

Thomas, who had two points in the first half, then stepped up. The guard, who fell out of the starting lineup at the beginning of the Jayhawks' win streak, made a 3-pointer and a pair of free throws in the final two minutes of the third quarter.

"I've been working and got in the gym, and then I had to come out today because of Holly's absence," Thomas said. "Everybody else had to step up and take over the minutes and do what they had to do."

Kansas held a 64-47 lead entering the final 10 minutes, and although West Virginia was able to pull within 11 points, neither team scored for the final 3:23.

Junior center Taiyanna Jackson had nine points and seven rebounds and sophomore forward Ioanna Chatzileonti had eight points and six rebounds for the Jayhawks, who shot 53.8 percent (28-for-52).

Freshman guard JJ Quinerly, who scored a career-high 22 points against the Jayhawks on Feb. 12, led the Mountaineers with 16 points on Tuesday. They shot 34.7 percent (26-for-75) and had just 11 turnovers.

Kansas will be back on the road for a game Saturday at Texas Tech. It won the first meeting 71-57 on Jan. 22.

So happy for these young women. And, hat's off to the coaches, too. The hard work is beginning to pay off. Rock Chalk on!

TTU doesn't have a good record but they are dangerous. Need to get that win and then shock the "upper" teams we face down stretch.

Hope Holly is better but great to see the other ladies step up.

I was surprised to not see us ranked in either poll (27th in the writer’s) and only receiving one vote from the coaches. The players do seem to have a very level headed approach but hopefully a little bit of a chip as well.

Gotta set the table on Saturday in prep for the meat of the schedule over the next 2 weeks.

Big game tonight and Saturday for the standings. ISU gets both defects.

This team is the best reason to subscribe to the +

Based on the results of completed 2/16 games [Texas Tech def OU in Norman, and Texas def Iowa State in Austin], we're now tied for 3rd with OU at 9-4 in conference, and 1 game in back of both Iowa State and Baylor (tied for 1st), each with records of 10-3.

The schedule ahead didn't get any easier, but the pathway to a conference championship became a little less unlikely.

Just got to keep on taking care of business!

I know the players should not look ahead (“one game at a time”) but the fans can. KU now plays 4 of their next 5 games against ranked teams.

@ #7 Baylor (2/26) - payback. The lady Jayhawks could and should have won at home against BU and could currently be sitting in 1st place tied with ISU. However, that is in the past, but it should give KU confidence that they can beat BU.

@ #15 OU (3/5) - no easy games left, but one can hope. If the the lady Jayhawks take care of business they control their own destiny!