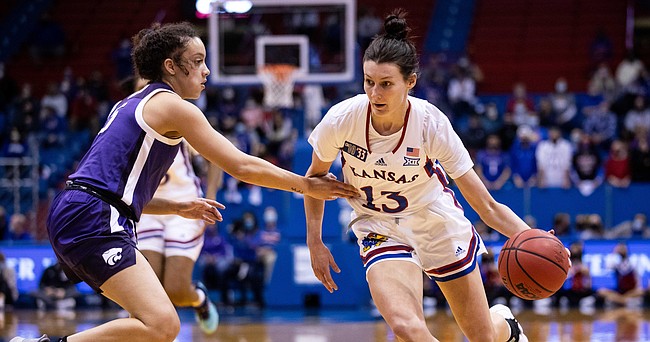 Kansas women's basketball player Holly Kersgieter drives to the basket in the game against Kansas State at Allen Fieldhouse on Feb. 12, 2022.

A team known for closing out opponents did so again Saturday night — and in the process reached highs unseen in Lawrence in more than 20 years.

The Kansas women's basketball team recovered from a prolonged shooting slump and used a 10-point run late in the fourth quarter to defeat Kansas State 63-51 at Allen Fieldhouse.

"I mean, it feels good to get a win, a home win, obviously, against a rival," said coach Brandon Schneider. "I wish it counted two, but it only counts one."

Junior guard Holly Kersgieter had her second double-double of the season with 12 points and 10 rebounds, and she surpassed 1,000 career points midway through the first quarter to become the first player recruited to Kansas by Schneider to reach that milestone.

The Jayhawks were led in scoring by junior guard Zakiyah Franklin, who finished with 16 points and six assists, and junior center Taiyanna Jackson had 10 points and 10 rebounds.

The excitement over the victory was dampened when Franklin and Chandler Prater collided head-to-head at midcourt with 23.5 seconds remaining. They each left the court bleeding; Schneider said they each needed stitches and were being evaluated for a concussion.

Kansas, meanwhile, shot 38.6 percent (22-for-57) and had a 48-31 edge in rebounding against a team led by one of the conference's best centers in junior Ayoka Lee, who finished with 18 points and 13 rebounds.

"They have one of the premier players in the country," Schneider said, referring to Lee. "I think the game got a little muddy today, but I think that's because we know each so well, and I would give credit to both teams for really playing to the scout and making it hard on each other. It was a really competitive game and I thought any basket today really had to be earned."

Kersgieter entered the game needing eight points to become the 30th player in school history to reach 1,000 points, and she didn't wait long to do so. She hit the mark with 4:32 remaining in the first quarter when she sank a 3-pointer from the right wing.

"It doesn't really get much better than that," Kersgieter said. "I feel good. There's a lot to celebrate, but even though it was a big day, we still have a lot of work to do. This was a good way to do it. ... I'm grateful. It's a great thing to have."

Her 3-pointer gave the Jayhawks an 11-2 lead, but the Wildcats clawed back to within 13-7 at the end of the quarter.

The expected showdown between Jackson and Lee, who are both 6-foot-6, didn't materialize in the first half. Jackson battled foul trouble and was limited to just four minutes, and her replacement, Nadira Eltayeb, also picked up a pair of fouls.

That forced the Jayhawks to turn to a pair of little-used substitutes in junior Chisom Ajekwu, a Lawrence High grad, and freshman Danai Papadopoulou. They also faced challenges while going against Lee; in fact, Papadopoulou, who made her first appearance since Jan. 8, also picked up two fouls.

Lee, who scored 61 points against No. 14 Oklahoma on Jan. 23, propelled the Wildcats to a 26-24 lead at the end of the first half by knocking down a jumper in the lane with 0.8 seconds remaining.

But things changed early in the third quarter once Jackson returned to the court. She scored eight points in the period, including two on a drive through the lane that forced K-State to call a timeout with 5:30 to play and led to her teammates mobbing her in celebration at center court.

That basket was part of a 16-0 run that lasted 7:12 and only ended once Lee made a pair of free throws with 43.3 seconds remaining in the quarter.

Those foul shots in turn launched a run by Kansas State, which trailed 45-36 at the end of the third and opened the fourth on a tear. It scored the first nine points of the quarter, and a wide-open 3-pointer by Laura Macke with 8:27 remaining, the only one the Wildcats made all game, drew them within two at 45-43 and forced Kansas to call a timeout.

Kansas went more than five minutes of the fourth quarter without scoring, at which point its lead had evaporated. But unlike the first game in Manhattan, when Kansas recovered from a 16-point deficit to tie the score late but lost, it closed Saturday's game by outscoring Kansas State 18-4 over the final five minutes and making its last five shots.

The Jayhawks will look to extend their winning streak to six on Tuesday when they play host to West Virginia, whom they beat 65-47 on the road on Wednesday.

That win, and the game the following Saturday at Texas Tech, will be crucial to Kansas' NCAA Tournament chances. It finishes the season with games against the top four teams in the conference in Iowa State, Baylor, Texas and Oklahoma, all of which are ranked.

"I'm really proud of how our young ladies have remained confident, but I think they've approached every preparation with humility and maturity, and that's how we're going to do it," Schneider said. "I stand by what I said — nine (Big 12 wins), you probably get in. Ten, you're comfortable. But we're not there yet, and if you've looked at our schedule, it's pretty tough here down the stretch."

Kansas great Tamecka Dixon talks about returning to KU and learning from Marian Washington by KUsports.com

Congratulations, Jayhawks (again, this will never get old)! Kudos to Holly on the 1,000 points, although she'll likely finish her KU career nearer 1,500. With OU's loss to Texas, the ladies are now just 1 game out of a tie for 2nd in the conference, and pretty much every player on the team is contributing meaningfully to the success. So happy for them. Rock Chalk!

ISU plays ut and ou this week. It could get really clustered or ISU could start to separate.

Gotta take care of business this week and hope to steal one or two the last two weeks. The worst might be TCU with no rest the day after ut and two before ou.

It's awesome the way they're playing, and I have to admit that I never expected this, given how Schneider had done through the first however many years.

I assume we'll be ranked by now or at least be close, right?

KSU was a six seed on bracketology before the game yesterday and Kansas was an 11 seed, hopefully they finally make a nice move up on there after this one, they actually had dropped from a 10 to 11 during the winning streak.

Charlie Creme is a total idiot. I think his new brackets will be out soon. I am sure we are probably first one out after this win! lol

Great win for the lady Jayhawks. It was our first game in person this season and the atmosphere was outstanding (credit KSU fans for making the drive), and the Jayhawks played a gutsy game. First, kudos to Taiyanna Jackson who was a game changer. Her defense on Ayoka Lee in the second half was outstanding. Credit to the effort by the other 3 post player (Nadira Eltayeb, Chisom Ajekwu, and Danai Papadopoulou) who made Lee work on every possession, but Jackson was phenomenal preventing Lee from getting the ball, tipping the ball away, blocking shots and providing inside scoring. It show why you must have size in the Big 12 to compete for championships. Second, why is Schneider talking about the NCAA tournament? The Big 12 championship is in sight! They are only 2 games out of first (ISU at 10-2, and OU and Baylor at 9-3) and get a shot at the 3 teams in their way. Lastly, I thought Bruce Weber was my least favorite KSU head coach, but the jerk Jeff Mittie now leads the way. Calling a timeout with 24 second and down 12 is classless and ultimately led to both Zakiyah Franklin and Chandler Prater getting hurt trying to inbound the ball leading by 12 with 24 seconds remaining! Mittie, there are no 12-point plays, and it was not a learning situation. Just allow the players to run out the clock and shake hands. Your move was classless. Nevertheless, I hope both Franklin and Prater are okay because they too played hard to the end. Rock Chalk.

Good post Andy. Glad you got to go in person. When I was in grad school elsewhere, MBB tickets were not attainable for me, but I got WBB tickets, including the year they won the NC. Great fun. Wish we were close enough to get to the Phog.

I think Coach Schneider’s comment is as much recall of what was said at the beginning of the season as anything. I’m sure the ladies play to win every game as much as anyone, and there are a series of other goals. Beyond winning individual games, making the tourney is the next most attainable.

Definitely hope the ladies are okay. It really stinks to get hurt late and both on the same play. That being said, while there isn’t a 12 pt play, there are a lot of plays that can be made in 24 seconds. It was a crazy swing against us vs Baylor?

7 pt swing in 30 seconds vs bu, but who knows with the 3 pt shot. 4 possessions at 6 seconds is a longtime. Glad we weren’t part of that video classic.