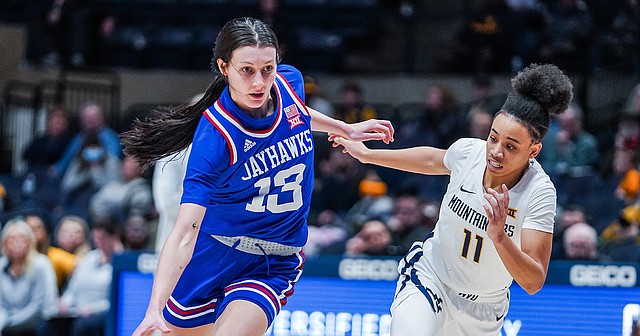 When Kansas women's basketball coach Brandon Schneider recruited Holly Kersgieter out of Charles Page High School in Sand Springs, Oklahoma, four years ago, he envisioned her as someone who would thrive on defense and in transition.

Yet on Saturday against Kansas State at Allen Fieldhouse, Kersgieter could become the first player who committed to play for the Jayhawks under Schneider to score 1,000 points.

"I would love that," Schneider said. "Holly's had a terrific career here to this point."

Kersgieter, a junior, is eight points shy of that plateau after she scored 18 in a 65-47 victory at West Virginia on Wednesday that has KU on a four-game winning streak.

If she could reach it Saturday, and the Jayhawks win at home in the season's second installment of the Sunflower Showdown, they'll have quite a bit more to celebrate than the little milestones that have parked what's shaping up as a breakthrough season.

They're heading toward a first NCAA Tournament appearance under Schneider, who is in his seventh season as the Jayhawks' coach, and their first since 2013.

"I didn't even know I was that close until a game or two ago," Kersgieter said. "That's a big deal. It's something to celebrate. But that's not what I'm focused on (against Kansas State), obviously ... but it's something to be thankful for because that is a big deal."

Kersgieter, who is averaging a team-high 14.6 points per game this season for Kansas (16-5, 7-4 Big 12), would become the 30th player in program history to hit that mark.

The last two to do so were Kylee Kopatich and Jessica Washington, who each did so within a week of each other during the 2018-19 season. But Kopatich committed to play for the Jayhawks under former coach Bonnie Hendrickson, and Washington spent her first two seasons at North Carolina before transferring in.

A solid perimeter shooter as a freshman, Kersgieter understood the performance of developing a more well-rounded offensive game after her first season, Schneider said. She began doing so last season, her sophomore year, when she averaged a team-high 17 points per game.

"She came in with a completely different mentality and has continued to try to grow her game," Schneider said. "I think it says a lot about her willingness to work and her coaches. You know, she's had some really good coaches who have worked with her in terms of her skill development."

Kersgieter's path to Kansas was unique, but understandable. Her father, Charles, and Kansas men's basketball coach Bill Self were high school teammates, and despite living an hour east of Oklahoma State, the Kersgieters were Jayhawks fans.

She had her first double-double of the season against Oklahoma State on Jan. 29, the start of the four-game run that is the Jayhawks' first in Big 12 play under Schneider.

In Kansas State (17-7, 7-5 Big 12), they'll encounter an opponent that is just as determined to make a statement this season. Unlike the Jayhawks, who have only received votes in the Associated Press poll, the Wildcats have bounced in and out of the rankings.

They have otherwise been resilient in Big 12 games, especially lately. After their 82-79 home loss to Baylor on Jan. 18, in which they were leading by four points with 25 seconds left, they have not lost a game in which they have held a second-half lead.

That includes a 65-56 home win over Oklahoma State on Feb. 2 in which they recovered from a 14-point hole in the second quarter and a 75-60 home victory against TCU on Feb. 6 that Kansas ended with a 19-2 run.

"We've taken really, really good pride in our defense," Kersgieter said. "We know that if we take pride in that first, the offense will come. You can't plan to outscore your opponent in the fourth quarter. You have to defend first, and so we've just been doing that really, really well, and just getting stops — we've been building on momentum from that."

That defense will be especially paramount inside against Kansas State center Ayoka Lee, who scored 25 points on 20 shots and had 15 rebounds in the first meeting. A 6-foot-6 junior center, Lee set a Division I record earlier this season when she scored 61 points against No. 14 Oklahoma on Jan. 23.

Should the Jayhawks emerge from Saturday's showdown with a victory, they could gain further momentum over the following week. They have rematches with West Virginia and Texas Tech, whom they have already beaten, before they close with games against the top tier of the Big 12 in Baylor, Texas, Iowa State and Oklahoma, all of which are ranked.

That being the case, Kersgieter knows what the game against Kansas State represents — for herself and for her team.

"Both teams have been working really hard for a few years and things are finally happening for both of us, which is good," she said. "Games like this in a big conference, it's a big deal. It will be really fun."