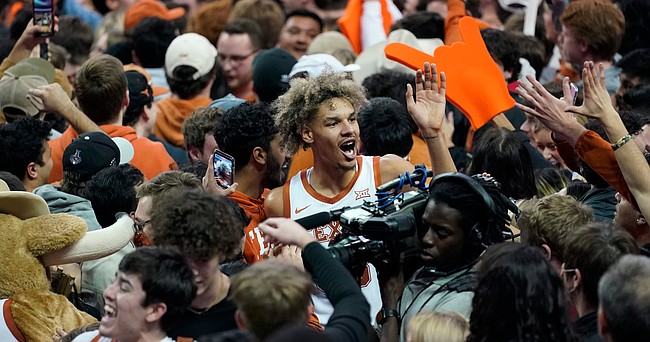 The Big 12 Conference on Wednesday issued a public reprimand and a $25,000 fine to the University of Texas for its handling of the court storming that followed the Longhorns’ 79-76 win over No. 8 Kansas on Monday night in Austin, Texas.

Citing the Big 12 Conference Sportsmanship and Ethical Conduct policies, Big 12 Commissioner Bob Bowlsby said Texas and the rest of the Big 12 members have a “duty to ensure an environment that provides the visiting team and game officials a safe exit from the court.”

Tuesday night, on his “Hawk Talk” radio show, KU coach Bill Self said there was uncertainty from the UT security teams about which way KU should exit. Self also said senior guard Remy Martin’s injured right knee was bumped into by a fan which added to the soreness Martin has been experiencing from the bone bruise that has kept him out of action in recent weeks.

Self said he had no issue with the fans storming or celebrating in that manner. He simply said the confusion created a situation where the Jayhawks had not left the court as quickly as they otherwise could have.

According to Big 12 rule 12.3.4, "A Member Institution must safely escort the visiting team, coaches, officials and administrative staffs off the playing surface."

“In this instance, execution of the University’s court storming plan did not adequately provide the protections necessary to safe-guard visiting team personnel,” Bowlsby added in Wednesday's reprimand.

During the 2021 football season, Baylor also was reprimanded and fined $25,000 after its fans rushed the field following a win over Oklahoma.

It's worth noting that Arkansas, which competes in the SEC, where the Longhorns are headed in the coming years, also received a fine for storming the court following Tuesday night's win over No. 1 Auburn. The Razorbacks were fined $250,000 for the incident being their third offense.

A Big 12 spokesperson told the Journal-World on Wednesday night that the Big 12 does not have an ascension policy like the SEC and that these incidents are reviewed on a case by case basis.

Yep. In other news, I was fined a penny for speeding.

You don't go after the School, you go after the person at the school who is in charge of crowd control. Fine that person 20% of their annual salary. You will never see it happen again there. Also once the other idiots in charge of this see that one of their own was fined it will stop.

Someone posted somewhere to not allow students into the next home game for the penalty. That would draw some attention to the matter.

That would never happen. You go after the person who is in charge of court control. $25k means nothing to a school, but to a person that will get their attention.

Hey, they paid the refs a whole lot more to allow a hockey match to occur. Did you catch Beard`s post game interview? he said "when you play Kansas, you have to play physical".

I really dislike what college basketball has been allowed to become after watching games like Monday night, or our battles with Tech and West Virginia. When Fran (who is just the worst) starts blathering about how its going to be a rock fight tonight between two teams of junkyard dogs, it just makes me angry because we're going to see an inconsistent whistle where the refs call the softest of touch fouls and then turn around and ignore outright muggings.

The physical style of defense, if you can call it that, that those three teams play is built entirely on being overly physical to the point of fouling every possession to prevent any sort of offensive flow and should correctly be whistled every trip down. Refs are supposed to watch for and call freedom of movement fouls where the defense is impeding the offense, but yet each of those teams (and also Baylor to some extent) defend guards with a hand on the hip steering players where they want them to go. Or they play chest to chest bodying you to the point of traveling or throwing an errant pass to get rid of it, which should be a cylinder foul. The number of times I've watched our players try to dribble in from the wing and have a hand on their hip pushing them out toward the middle, or blow past their man and see the defender's hand on their hip and the other reach and grab at their chest to slow them down is absurdly high.

It is lazy coaching by these teams to play this style of basketball. And worse yet when the coaches and players act incredulous that an obvious foul is actually whistled. This of course is due in part to the refs not being consistent from the start and calling a foul a foul. To me, it shows that these coaches/teams think that they can't match up with the opponent from a talent standpoint so you just have to bully them and shove them around to gain an advantage. Thankfully, talent usually wins out in the long run, and those teams typically get bounced in the tourney when a new officiating crew that isn't used to their crap sees it and starts calling what should have been fouls all season long.

I agree, but KU needs to get tougher in order to compete w/ the bullies.

Employees are generally protected by their employers unless there’s gross negligence on the part of the individual. Especially public employees.

The SECs incremented approach seems appropriate though it sounds like that’s a possibility in the Big12-4+2-2+4.

Rather than the fine going to the conference, it would seem appropriate for it to go to the visiting school. That wouldn’t heal Remy’s knee any faster, and probably wouldn’t stop the individual fans, but might create some collective peer pressure towards decorum.

Never seen a more clear example of gross negligence. It endangers the crowd, the teams, and media.

It is a person who decides how court control will be handled. Unless you fine the person in charge you might as well just wait for someone who does not rush the court, but is injured to sue a school for a few million. That will get someone's attention.

Rodney - I’d suggest you’ve been watching too much tv drama if that’s the best example of gross negligence. It’s unfortunate for Remy, but he just had his knee bumped, and beyond that there was some confusion on the part of the people executing the plan. Or maybe someone at ut did say, screw having an exit plan. We’re never going to win a significant home game. Fagetaboutit. Ya, that must be it.

Gross negligence is a lack of care that demonstrates reckless "disregard" for the "safety" or lives of others, which is so great it appears to be a "conscious" violation of other people's rights to safety.

If you want to control something, the person responsible has to be held accountable.

It is a person.