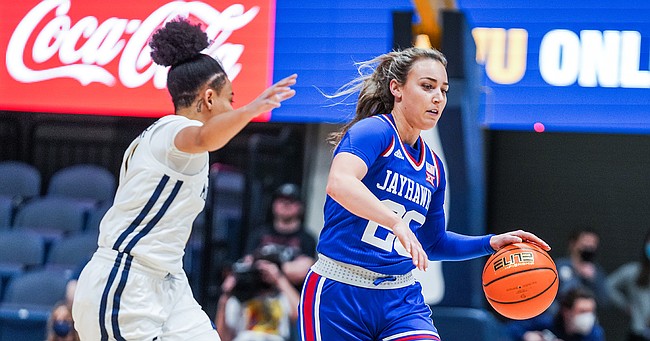 Chandler Prater added 12 points off the bench for the Jayhawks (16-5, 7-4 Big 12), who have their first four-game conference winning streak since the end of the 2008-09 season. The win was their first over West Virginia in coach Brandon Schneider's seven seasons and their first in Morgantown, West Virginia, since Jan. 5, 2013.

KU had a 48-30 advantage in rebounding, matched West Virginia with 26 points in the paint and made 23 of its 26 free throw attempts, including its first 17.

Franklin went 9-for-9 from the foul line, and the six free throws she made in the third quarter helped keep the Jayhawks ahead as the Mountaineers shot 53.3 percent (8-for-15) in the period.

"When you play West Virginia, it's a street fight," Schneider told Jimmy Chavez on the Jayhawk Sports Network radio broadcast after the game. "You've got to battle on the glass and you've got to compete hard, and then you've got to put some pressure on the paint in order to try to get to the free throw line.

"We did a good job getting there, especially, I thought, in the third quarter and stepped up and made foul shots, and that's part of toughness as well."

Kansas finished the first quarter on a 10-2 run over the final five minutes to claim a 15-11 lead, and the teams combined to play a sloppy second quarter in which West Virginia didn't score with 5:11 remaining before halftime.

The Jayhawks held a 27-19 lead at the break, but their advantage shrunk to two at 29-27 with 8:24 left in the third quarter once JJ Quinerly made a 3-pointer for the Mountaineers.

Although the Mountaineers trailed 46-38 entering the fourth, they drew no closer. Kansas held a double-digit lead over the final six minutes and Franklin emphatically put West Virginia away when she caught a full-court baseball pass from Kersgieter on an inbounds play, made a layup, drew the foul and sank the free throw with 1:36 to play.

The Jayhawks shot 35.2 percent (19-for-54) on the evening and made just four of their 12 3-point attempts. They had 11 assists, but they also committed 20 turnovers, including eight in the second quarter.

Kansas will be back on the court Saturday when it plays host to Kansas State at Allen Fieldhouse at 6 p.m. The Jayhawks lost 69-61 in Manhattan on Jan. 19 despite having wiped out a 16-point lead with 2:21 remaining.

Dang! An 18-point road win? Really? We've got good players, and we're deep. And, we seem to be getting better. Not bad for a team that was picked to finish 10th. Congratulations, Jayhawks!

Hoping this is the beginning of a solid program.

Wow, the ladies are on a roll!

How wonderful to see the gals do so well. Hopefully, then can sustain it and avoid all of the pitfalls of previous teams of late.
Now for a football team.

It is so great to see the program come around as the uni stuck with Coach Schneider through the growing pains. Great to see the ladies finish strong as well. Big big big game on Saturday. The kitties are one of the teams in front of us in the standings.

For whatever it's worth, next year's team is almost certainly going to be stronger than this year's, maybe significantly so. As tantalizing as that prospect is, however, the possibilities for this year are more than exciting enough for it to remain the focus.

The lady Jayhawks continue to improve. They are currently in 4th place at 7-4 in the Big 12 and are only 2 games out of first (both #9 ISU and #12 OU sit at 9-2). The #10 Baylor Bears who KU truly should have beat (bad finish when in control and at home), are at 8-3. Revenge on Sunday at home is needed to keep KSU (7-5) in their rearview mirror. Hopefully the students and Lawrence community will come out to support. Rock Chalk.