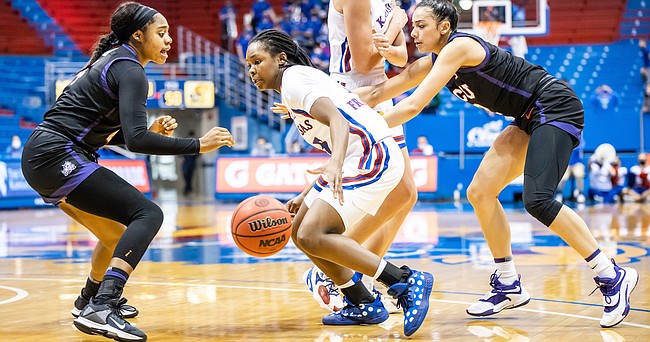 Zakiyah Franklin, a guard on the Kansas women's basketball team, dribbles during a game against TCU at Allen Fieldhouse on Feb. 6, 2022. (Chad Cushing/Kansas Athletics)

Winning three consecutive Big 12 games may not seem like much of a cause for celebration, but Kansas women's basketball coach Brandon Schneider wants his players to do that anyway.

The Jayhawks, who enter Wednesday's game at West Virginia on a three-game winning streak, hadn't accomplished that feat during Schneider's seven seasons until they beat TCU at Allen Fieldhouse on Sunday.

"I think anytime they hear we haven't swept Oklahoma State since 1996 or haven't swept TCU since '13, those are things that they need to celebrate internally and feel good about," Schneider said, referring to the teams Kansas has beaten over the past 10 days. "Those are the small victories along the way that we talk about that have to occur as you're striving to accomplish any mission."

That mission, of course, is postseason success — something else that has been elusive in recent years. Schneider hasn't guided Kansas (15-5, 6-4 Big 12) to a postseason appearance since he replaced Bonnie Henrickson in 2015, though there's a case to be made that the Jayhawks may have qualified for at least the NIT should the coronavirus pandemic not wiped out the competitions in 2020.

As of Tuesday, the Jayhawks were No. 36 in the NCAA's NET rating, which is used as a guideline for NCAA Tournament selection. That puts them on the cusp of hearing their names called on Selection Sunday a month from now, but it also means that there's little room for error as the regular season continues.

ESPN's Bracketology exercise had Kansas as a No. 11 seed in its most recent update on Friday morning. The tournament, which will include an expanded field of 68 teams for the first time, includes 32 automatic qualifiers and 36 at-large bids.

"It's good to be in a better position, for sure, where you feel like the mission is nowhere near accomplished, where there's been some checkpoints along the way that you've gotten to that are necessary to accomplishing the ultimate goal," Schneider said.

Kansas faced Oklahoma State in back-to-back games, a 68-54 win on the road on Jan. 29 before a 65-56 victory at Allen Fieldhouse on Wednesday. KU trailed by 14 points in the second quarter of the second game before embarking on a 20-0 run that led to a victory.

And on Sunday, in a 75-60 home win against TCU, the Jayhawks were ahead by only one point entering the third quarter before outscoring the Horned Frogs 27-13 in the fourth.

Junior center Taiyanna Jackson, who transferred to Kansas from Trinity Valley Community College before the season, on Sunday had her second consecutive double-double with 13 points and 17 rebounds. Redshirt sophomore guard Chandler Prater continued a recent string of strong performances with 17 points off the bench, and junior guard Zakiyah Franklin had 14 points and a team-high six assists.

"We have a lot of veteran leaders and a lot of younger people, but we have depth at every position, so we know what we're capable of," Franklin said. "In the summertime, we knew what we were capable of already, so it's just trying to continue to improve."

The Jayhawks' upcoming stretch, beginning Wednesday, will prove crucial to their season. After traveling to West Virginia, they'll face Kansas State at home on Saturday, play their return game against the Mountaineers on Feb. 15 and then visit Texas Tech on Feb. 19.

Then the intensity increases. Kansas will close the regular season with games against No. 9 Iowa State, No. 10 Baylor, No. 16 Texas and No. 12 Oklahoma. It won at Texas on Jan. 12 and had a four-point lead against Baylor with 25 seconds left on Jan. 16.

Franklin said the Jayhawks need to "take care of business" when the opportunities are presented. For the most part, they have: They won only seven Big 12 games in the previous two seasons combined, and the Mountaineers (11-9, 4-6 Big 12) are still reeling after the loss of leading scorer KK Deans to a knee injury in a loss to Baylor on Jan. 29.

But Schneider knows February is always a grind — "come in, lift weights, watch film, practice, travel, play, get back and do it all over again," he said — and the challenges are always apparent.

"I think that when you are having success, it's easier to come in and have the right approach and the right attitude," Schneider said. "But we also have a group that brings a lot of energy and I think that's been a real positive."

If West Virginia is vulnerable, they sure didn't show it in their double-overtime loss to OU in Norman. They had the Sooners on the ropes in both regulation and the first overtime period, before coming up just a hair short.

No one game is critical, but all of them are important. Still, a win on the road against WVU would be relatively huge. Regardless, if they can just keep improving like Zakiyah Franklin says, things should work out pretty well come selection time.