Game Day Breakdown: No. 8 Kansas Basketball at No. 20 Texas 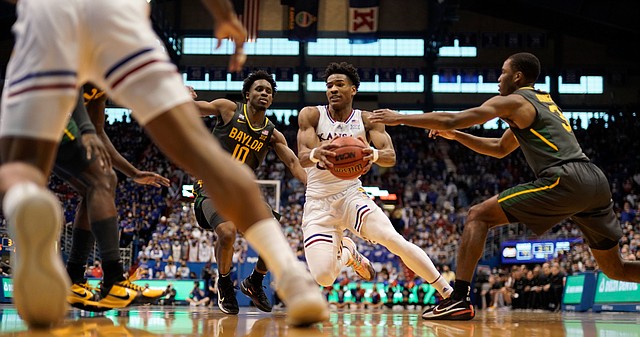 1. Tap into past Texas Tech teams

Although the Jayhawks coming to town has always seemed to fire up the Texas Longhorns and their fans, the 2021-22 season is new territory for these Longhorns.

With former Texas Tech coach Chris Beard — a UT graduate — taking over for Shaka Smart, there’s a new brand of basketball being played in Austin, Texas, these days.

Although many of the Texas faces are new, the Jayhawks are anticipating seeing a familiar style of play on Monday night.

“They play super hard,” KU forward Mitch Lightfoot said. “Coach Beard’s really big on that. We have to make sure we match the intensity, if not (do) better. They play hard. They make shots. They’ve got players. It’s going to be one of those games where we have to go down there and play our best ball to give ourselves a chance to win.”

Beard’s first season at Texas has not been without its growing paints and periods of adjustment.

The Longhorns dropped three of four — to Oklahoma State, Iowa State and Kansas State — during a stretch in mid-January. And UT was rocked by Texas Tech last week in Beard’s first trip back to Lubbock, Texas, since leaving.

In short, KU better take care of the ball and exercise as much patience as possible to get good looks or it could be a long night for the visitors.

2. Second chances a must

If there’s one area the Longhorns seem to be particularly vulnerable it’s on the offensive glass, where they’re allowing opponents to get 29% of their misses back, which ranks 217th in Division I.

According to KenPom, the national average for offensive rebound percentage is 28.3%, so it’s not as if Texas is atrocious in this area. The Longhorns have length and athletes at every possession, so it’s probably as much a matter of mindset as anything.

That has also been the case for Kansas this season, and the Jayhawks’ effort on the offensive glass has been better more times than not so far this season.

KU ranks 20th nationally in offensive rebound percentage, getting a whopping 34.8% of its misses back.

David McCormack and Jalen Wilson have both been consistently strong in this department, and the two KU forwards entered the week ranked in the top five in the Big 12 Conference in rebounding, with McCormack leading the way with an average of 3.3 offensive boards per outing.

KU lost the war on the offensive glass in Saturday’s drubbing of No. 8 Baylor, 17-11, but the Jayhawks made the ones they got count, outscoring BU 20-13 in second-chance points.

Making shots, taking care of the ball and playing with poise on both ends will be crucial for Kansas in this one. But the more the Jayhawks get on the offensive glass the more margin for error they’ll have elsewhere.

The reunion figures to be fun for all parties involved, as much for the opportunity to see an old familiar face as for the chance to gain bragging rights against him.

In addition to playing a key role in recruiting a handful of players on KU’s current roster, Howard has specific knowledge of the strengths and weaknesses of several of KU’s key players.

“I know they’ve got a guy on their staff that obviously knows a vast majority of the stuff (we’ve) run over the past several years,” Self said of Howard. “I’m sure they’ll have an insider so to speak. We have to come up with some ways to hopefully attack the way they defend. … Jerrance being (on the Texas bench) will make it a little more exciting for our guys as far as energy.”

Lightfoot, who was around Howard longer than any other player on the current Kansas roster said those who know Howard were focused only on the scouting report heading into the Jayhawks’ massively big road game.

“Obviously, we know him,” Lightfoot said of Howard. “(But) we’ve got to go down there and prepare for Texas.”

The Kansas offense vs. the Pursuit of 60 points

The Texas defense has had a magic number this season that has determined the outcome of so many contests and all of their Big 12 Conference games.

The Longhorns are 17-0 this season when holding opponents below 60 points.

Kansas, meanwhile, has topped 60 points in all 22 games it has played this season. Interestingly enough, KU’s season low in total points (62) was good enough for a win in a 62-61 home win over Iowa State and a loss in an 80-62 home loss to Kentucky.

In KU’s three losses so far this season, the Jayhawks are averaging 67.3 points per game.

Getting to 60 might not be enough, but every point Kansas climbs above it increases the Jayhawks chances of winning.

KU is averaging a Big-12-best 80.2 points per game and Texas has topped the 80-point mark just twice all season.

KU’s win over Baylor last weekend gave the Jayhawks a two-game lead over the Bears and Texas Tech in the Big 12 race. And there’s no doubt that both of those teams are rooting for Texas in this one.

Not only would a KU loss bring those two back into the heat of the race, but it also would reignite UT’s hopes of challenging for a conference crown in Beard’s first season.

While the two-game lead that KU gained after a big win over Baylor gives the Jayhawks some breathing room, Lightfoot said the Jayhawks were not about to let up.

“They’re all big,” he said after Saturday’s victory. “We’ve got to go down there and handle our business like we did (vs. Baylor).”

KenPom lists Texas with a 1-point edge in this one and a 53% win probability. It’s one of just two games (at Baylor) on the rest of KU’s schedule that KenPom sees going against the Jayhawks.

According to oddsmakers in Las Vegas, Texas opened as a 1-point favorite as well, but that line moved to both pick ‘em and KU -1 at various sportsbooks.

The Longhorns swept a pair of games with Kansas a season ago, rocking the Jayhawks by 25 in Lawrence and winning an overtime game in Austin. While those games were decided by two different teams, the Jayhawks may find motivation in the memories that are still with them from those two setbacks.

“Last year, they cleaned our clock here like Kentucky did, maybe worse,” Self said Saturday.