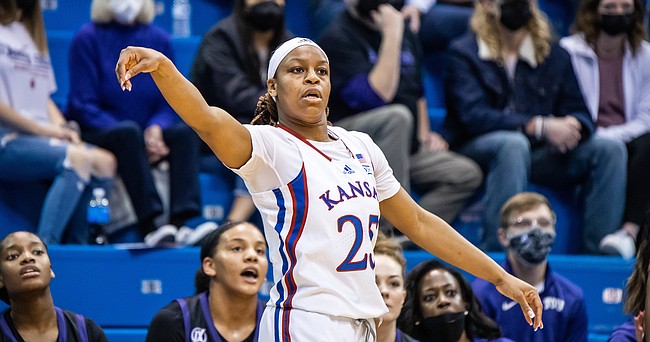 Kansas guard Chandler Prater follows through on a shot in front of the TCU bench during the Jayhawks' 75-60 win over the Horned Frogs on Sunday, Feb. 6, 2022 at Allen Fieldhouse.

The Kansas women's basketball team pushed its winning streak to three games and its Big 12 record to 6-4 with a 75-60 win over TCU on Sunday at Allen Fieldhouse.

The win completed KU's season sweep of TCU — the Jayhawks' first such achievement since the 2012-13 season — and pushed KU to 15-5 overall and 6-4 in Big 12 play, marking by far the most conference games KU's women have won in years with eight Big 12 games still to play.

KU's three-game winning streak is its longest since 2015.

KU was led by a second consecutive double-double from transfer forward Tayianna Jackson, who scored 13 points and grabbed a career-high 17 rebounds in the win.

Kansas led 18-15 after the first quarter thanks to a 7-0 run that turned a 15-11 deficit into a KU advantage. The Jayhawks delivered a similar finish to the second quarter, this time using a 10-1 run to take a 34-31 lead into halftime.

Kansas led just 48-47 heading into the fourth quarter and then dominated the rest of the way, outscoring the Horned Frogs 27-13 in the final frame while shooting 66.7% from the floor.

KU's defense was equally dominant, holding TCU without a field goal for the final 5:35 of the game.

“We’ve shown the ability to be pretty good down the stretch and I think that this team has learned from some earlier situations,” KU coach Brandon Schneider said after the win. “In conference games, you have to have belief and then you have to trust that if there’s going to be adjustments then you have to go out there and execute those things. I thought we did a really good job tonight of closing the game tonight in the fourth quarter.”

Next up, the Jayhawks head to West Virginia for a 6 p.m. showdown with the Mountaineers on Wednesday. The game will be televised by Big 12 Now on ESPN+.

Congratulations, Jayhawks, on another strong finish and solid win. So many contributors on this team!

After a very winnable game against WV to start the week, we get to go for redemption against the purple kitties next week.

A lot of credit to this team, and to a coach that I thought would be gone at the end of this season.

As David points out, 5th place looks really good, and there is space to move up. Congratulations to everyone in the program for all of the hard work, commitment and confidence that has moved you forward to a very solid season!