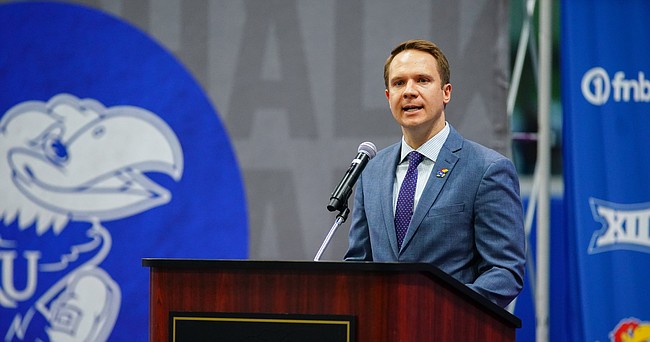 In what has become nearly an annual affair at the University of Kansas, members of the University Senate quizzed KU’s athletic director on whether the athletic program can provide more money to support general university operations.

At Thursday’s University Senate meeting, the answer again was that’s not likely to happen soon, but new athletic director Travis Goff did have a new explanation on why — the new Big 12 Conference likely won’t be as rich as the old one.

By 2025, both Texas and Oklahoma are scheduled to leave the Big 12 Conference for the SEC, and that will have major implications on the amount of money television networks are willing to pay the Big 12 to air conference football games.

“I do forecast, and I could get in trouble for this from the conference, but I do forecast going backward in our media distribution,” Goff said.

How much is uncertain, but it could be a cut of $10 million or more spread across the universities of the conference. That too is changing, as four new schools — Houston, Cincinnati, BYU and Central Florida — will join the league. That means the television money in the future not only will be smaller in total, but also will be split differently.

“Nobody in that group can come close to driving the value that Texas has for the conference,” Goff said of the new schools and the impact they will have on the television contracts. “And No. 2, you are slicing the pie 12 ways versus the 10 that we have been.”

All of that will add up to athletic department budgets that are tougher to balance for a while, Goff said.

“I think we have a challenging three to five years ahead of us financially in athletics,” Goff said. “At some juncture, I think it would be a wonderful thing. I know we would all celebrate further opportunities for athletics to send dollars back to KU outside of the things I’ve described.”

While that was a new reason why KU Athletics will be challenged to provide more money to the general university, there was one old reason offered too — KU football.

Goff said the likely reduction in conference revenue makes it more critical than ever for KU to be successful both on the field and financially.

“It is not a surprise to anyone that we have been an underperforming program in the way of wins and losses, and certainly we have been an underperforming program as it relates to financial viability,” Goff said. “To me the takeaway is exceptional opportunity. I really believe in the world of this level of intercollegiate athletics that the University of Kansas has more upside, certainly as much upside as anyone out there, because of the potential within that program.”

In addition to improving the financial success of the football program, Goff said KU will rely on fundraising to help close any financial gap created by the loss of Texas and Oklahoma. University Senate members did push back on some fundraising issues. One member expressed concern that donors get overly excited about making contributions to athletics, which makes it more difficult to get them to donate to academic causes.

“Is there anything you can do to have them throw a few bucks our way?” Barbara Kerr, a professor and member of University Senate, said in relation to donors.

Goff said it was a topic that might come up as the department undergoes a new strategic plan, but he stopped short of endorsing the idea. He also told the group that it might be easy to overlook the amount of money that KU Athletics does send back to the university in terms of tuition payments for student-athletes, dining plans, housing payments and other such fees that KU Athletics pays on behalf of student-athletes. That amount totals about $18.5 million a year, while parking fees add another $1.5 million and the department pays about $1 million in wages to student employees.

Plus, there are the reputation-related benefits a university receives from a successful athletic program, although Goff said it is important to not oversell that function.

“You’ve probably heard this analogy that we’re potentially a front porch, so to speak, to the university, but by no means the most important aspect,” Goff said. “We have to be reminded of and remind ourselves of that regularly.”

Goff also addressed a few other items with the group:

— He said there was little information he could share about the status of KU’s NCAA infractions case regarding possible rules violations of the men’s basketball program. He called the case a “cloud that has been hanging over our heads” for nearly four years.

“I do anticipate there is a great opportunity in 2022 to move forward and put that behind us,” Goff said. “So I have allowed myself 10 months, but I really am optimistic based on my first 10 months that we will in 2022 move forward through that and will have a plan in place to make sure we navigate any of the challenges it brings successfully.”

— Goff said he doesn’t think a new NCAA constitution is likely to lead to the largest universities completely separating from the NCAA, but rather will “be a step toward further separation.”

“They can articulate any concerns they might have,” Goff said.

I hope our wunderkind AD spoke with legal about this "new" technology of anonymous texting. You need a 24 hour live interface first to ensure the person is not in a crisis. You also need to make sure something like this is not used for a type of text swating, allowing criminal harassment.

Will be interested to see what this "new" technology is. I hope he is just going to sub out a hotline to someone else who knows what they are doing.

I asked this same question (“whether the athletic program can provide more money to support general university operations”) of the previous AD, Jeff Long at the beginning of his tenure during a visit to the KU Medical Center campus and his response was a bit more encouraging at the time. However, the financial situation has only gotten more tenuous, in part due to Long and Les Miles incompetence, the landscape of the Big 12, and overall state of colleague athletics, including name, image and/or likeness (NIL) and the transfer portal (by the way do grades matter anymore?). I greatly appreciate how forthcoming AD Goff was, but he runs a multimillion-dollar business, and his first order of business is trying to figure out how to rebuild a football program, raise money to not only help the ends meet (he has non-revenue generating sports to fund) but to address a dilapidated Memorial stadium. Unfortunately, I don't expect Chancellor Girod will be the recipient of a surplus of money from the Athletic Department anytime soon. And yes, it appears that some people would rather donate to have a good football team than an even better Department of Biology, Chemistry, History, Music, etc. (and if you want to donate to the “Kansas Institute for Precision Medicine” please let me know). Yes, as stated the “KU Athletics does send back to the university in terms of tuition payments for student-athletes, dining plans, housing payments and other such fees that KU Athletics pays on behalf of student-athletes”, but college athletic is not a big money maker for the University of Kansas. Will it ever, unlikely, but one can always hope. Rock Chalk.

Considering that the cost of education has gone up many times higher than the rate of inflation, perhaps the professors could think about how to lower costs instead of begging for more money.

not sure i would be putting this on professors-start with the administration-given the current state of education in the US we need more professors and more people attending university.

it's no coincidence that ever since they passes the law that student loans were not able to be eliminated under bankruptcy laws that tuition has increased 4X! they have turned higher education into a racket!

What is it that people think drives the cost of education to go up?

There's a financial crisis, but yet - Bill Self has a life time contract? something just doesn't add up there.

Oh - and lets not talk about all the million$ wasted on football coaches.

KU cannot afford to be in the Big 12 - a diminishing conference.

The duration of Coach Self’s contract didn’t change the annual expense. It just improves the perception for recruiting under the cloud.

A successful FB will help a lot. There’s 2-3xs the revenue in empty seats though in the grand scheme of the budget that’s still relatively small potatoes. It would also save a few million to get off the coaching carousel.

I’m glad Mr Goff was hired. It is nice to have an alum leading and he also seems to be doing a good even if not spectacular job.

The amount of potential revenue lost via the football program could be such a benefit to the overall athletic department and take some pressure off of the basketball program to have to carry everything. Getting to a point where the football team is playing well and the stadium is routinely full or close to full would be a big first step. If that happens, you can start to think about increasing ticket prices, or at minimum stop selling such heavily discounted tickets to get people in the door. Add in potential bowl game revenue and it starts to look much better for not just the football program and investment in stadium renovations, but the overall health of the athletic department.

Having a competitive football and basketball program will also raise the profile of the university as a whole, and lead to better applicants for admissions to choose from. There are tons of studies on the increase in the number of applications that schools see following successful athletic seasons, and KU itself saw an uptick following the 2007/2008 seasons. As Goff was correct to point out, athletics are the front porch of the university and a successful department can help raise all boats.

Dirk, I'm not sure Bryce would agree with you. : }

Tony - I’d be heartbroken to not have everyone agreeing with me but I think I’ll survive. 😉