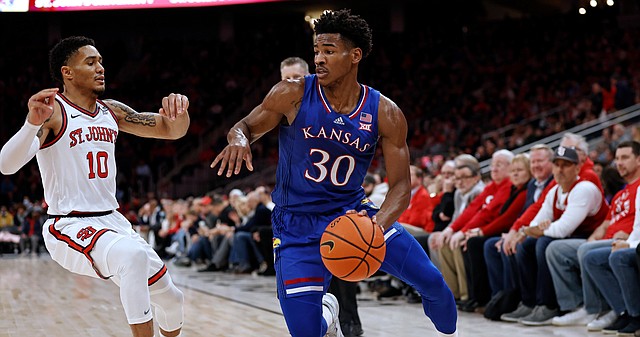 Agbaji did not make the trip for Tuesday’s 70-61 win because of what a KU spokesperson called “COVID-19 health and safety protocols” late Tuesday morning.

Kansas coach Bill Self said on his pregame radio show that freshman Kyle Cuffe Jr., who is redshirting, was in COVID protocol, as well. Cuffe also did not make the trip. 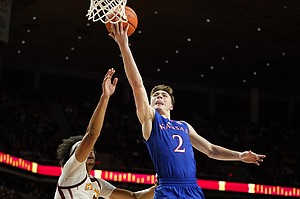 “We had a couple players who had symptoms over the weekend and they tested positive,” Self said. “And then we’ve done all the other precautions to make sure everybody else is good to go.”

Throughout the season, KU and Big 12 policy with COVID cases has been to test all players if one player tested positive. Similar policies are in place at other conferences and universities throughout the country.

Self said it was too early to know when Agbaji would return.

“He’s actually feeling OK,” Self said. “But he’s going to be out for an indefinite period of time. We certainly hope that’s on a very short number of days, as opposed to extended, but we don’t know that right now.”

Agbaji’s availability for Saturday's home game against No. 8 Baylor will depend largely on when the positive test result was returned.

According to the latest guidance from the NCAA, "COVID-19 management considerations suggest five days of quarantine after a positive test with isolation ending after five days if there are no symptoms or symptoms are resolving."

The NCAA also recommends mask wearing around others for five additional days and indicates that "participation in athletic activities without a mask during days six through 10 can be considered following a negative PCR/NAAT test or antigen test." 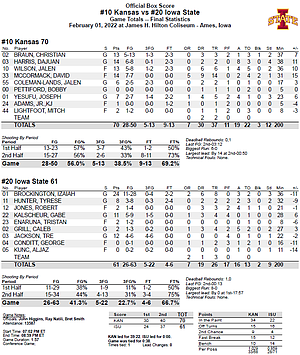 Agbaji entered the week leading KU and the Big 12 Conference in scoring at 20.9 points per game. In recent weeks, he had been mentioned on a national scale as a likely All-American and potential national player of the year candidate.

The first groups of students lined up around the building hours before tipoff and were let inside just after 4:15 p.m.

It was evident from the first minute that they were ready for this one. With signs in tow, their faces painted and their voices ready to wreak havoc, the most die-hard Iowa State fans started filling the venue with noise long before the countdown clock started ticking toward tipoff.

Known for years for it’s “Hilton Magic,” the Cyclones’ home arena for this one better resembled Hilton Madness, with the students even taking a page out of the K-State students’ playbook, chanting “(Expletive) KU!” repeatedly when Mitch Lightfoot appeared as the first Jayhawk out of the locker room.

The chant continued at different points throughout the first half and the ISU fans — as they have been known to do — acted as a sixth-man of sorts for the Cyclones. With every dribble, pass or pivot by a Kansas player, the Jayhawks had to deal with one of the five ISU players on the floor and the suffocating screams of the Hilton crowd.

The depth of the 2021-22 Kansas basketball team has been depleted by injuries throughout the season, with four key members of KU’s regular rotation dealing with some sort of ailment.

The status of Remy Martin’s knee has been closely watched — and well documented — during the past several weeks, but freshmen Bobby Pettiford and Zach Clemence also continue to be hobbled.

Martin made the trip Tuesday but did not suit up or play.

“He feels, and we feel, that (we should) give it an extended period of time (to heal), whether it be 5, 7, 10 (days), two weeks,” Self said on his pregame radio show. “We do not know when he will be closer to 100%. We’re all in agreement on that strategy and hope like heck it’s sooner than later.”

Self said Monday that Clemence was “at least another week” away from returning from the toe injury that has kept him out of action since Jan. 11. Clemence has worn a walking boot for much of that time but also returned to the team for pregame warm-ups a week ago, only to see him back in a boot and street clothes for the Kentucky game and on Tuesday night at Iowa State.

Pettiford, meanwhile, is still dealing with the abdominal injury that shut him down for several weeks earlier this season. Self said Pettiford was still not 100% and that KU would not see “the real him” until he gets back to that point. Self added: “But he’s a heck of a lot better than he was two weeks ago. So he’s trending in the right direction.”

Then there’s senior forward David McCormack, who has played in all 21 games and made 18 starts. After offseason foot surgery kept him out for most of the spring and summer, McCormack has been a full participant throughout the season. However, on Monday, Self said that McCormack was “not 100% healthy and not going to be 100% healthy all year long, with his foot. It’s sore.”

The Jayhawks are now 3-0 this season in games following a loss. That moves KU’s all-time record after losses under Self to 106-15. … The Jayhawks have now won six games in a row over the Cyclones, including a 28-22 record in games played at Hilton Coliseum. … KU is now 10-1 this season in games played away from Allen Fieldhouse. The Jayhawks are also 4-1 in Big 12 road games, with the only loss coming at Texas Tech. … KU leads the all-time series with Iowa State 188-66. Self is 33-10 all-time against ISU, including a 32-10 mark in his 19 seasons at Kansas.